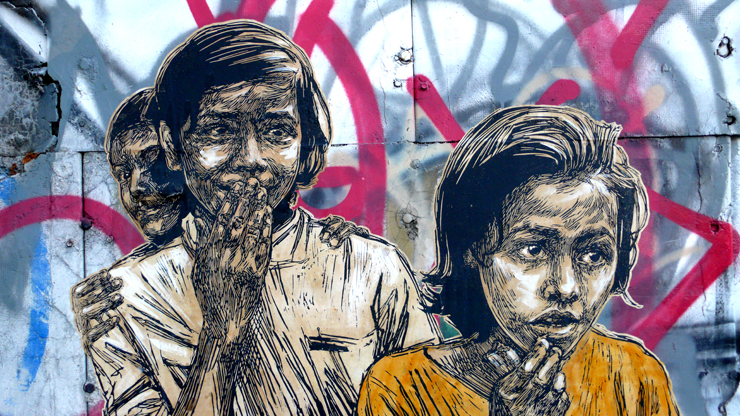 Black Rat Projects is delighted to invite you to our forthcoming show ‘Small Acts of Resistance’.

In ‘Small Acts of Resistance’ Black Rat Projects brings together six international contemporary artists whosework bears the stamp of both the artist’s aesthetic vision and the activist’s world changing ambition. Works by Peter Kennard, Dotmasters, Matt Small, Know Hope, and Armsrock will be on display from Thursday 4th November – Tuesday 30th November 2010. In addition to this, there will be a large-scale site specific installation created by Swoon. 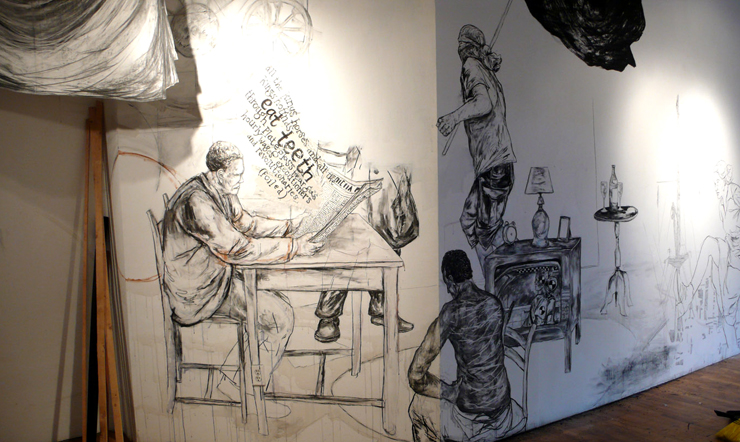 Occupying public space – whether it is within the realms of media and advertising or the architectural surface of the cities in which they work and live – has become a core characteristic of the way these five artists work. They have had their work published in books and magazines, shown in galleries, pasted in the streets and have performed in front of audiences. Between them they disrupt the smooth image that corporate capitalism seeks to spread at once highlighting its repressive character. An interventionist spirit informs their artistic practices and they are constantly engaged in a process of understanding how their work might function in the world, in a way that supports, and not conflicts with their ideals. For the first time Black Rat Projects brings this group of likeminded artists together under one roof to explore common threads in their work and world views.

This exhibition references in title a recently published collection of stories collated by advocacy director of Amnesty International Steve Crawshaw and Human Rights activist Jon Jackson. The preface to their book was written by Czech writer and dissident Vaclav Haval who explains the misnomer in the title: ‘Today, millions around the world live in circumstances where it might seem that nothing will ever change. But they must remember that the rebellions that took place all across Eastern Europe in 1989 were the result of a series of individual actions by ordinary people which together made change inevitable. Small Acts of Resistance pays tribute to those who have sought to live in truth, and the impact that can have. In my lifetime, I have repeatedly seen that small acts of resistance have had incomparably greater impact than anybody could have predicted at the time. Small acts of resistance are not just about the present and the past. I believe they are about the future, too.’

For biogs of the artists or a pdf or available works please email in to info@blackratpress.com

A preview evening for the exhibition will be held on Thursday 4th November from 6pm – 9pm. Invites will be sent out via email. We hope to see you there.

LoMan Part II: A Brain Tree, A Mutant Insect and "Make Your Own Luck"
The hits just keep on coming in Lower Manhattan (despite the closing of LIT Lounge) as Beau Stanton, Ludo, and ASVP finished their murals in a tie-breaker this week for the LoMan Arts Festival. Somewh...
New SWOON Storytelling on Battered Brooklyn Walls
Like leaves scattered into the street by a gust of wind, new large wheat-pasted linotype prints have appeared across some fatigued facades in post-industrial Brooklyn this autumn. Hand cut and painsta...
BSA Images Of The Week: 02.22.15
Here's our weekly interview with the street, this week featuring Ador, Antonie Trouve, Brain Alfred, Clint Mario, Daco, Delphine Carre, Dran, EZK, Hiss, Icy & Sot, M Chat, ME, Meer Sau, Phil...
BSA Film Friday: 09.24.21
Our weekly focus on the moving image and art in the streets. And other oddities. Now screening:1. Christo and Jeanne-Claude, a Final Triumph in Paris BSA Special Feature: Christo and Je...
John Fekner Exchanges "MEMORY" with Brad Downey / Dispatch From Isolation # 43
As you watch and wait to see the festering uprisings of workers and the growing crowds of poor and hungry in the US, we take you back to Friday, which was Labor Day in Europe. It was also the release...
Armsrock Black Rat Projects Gallery Brooklyn Street Art Dotmasters England Know Hope London Matt Small Peter Kennard Swoon