It Isn’t Just for the Meat Packing District Anymore! 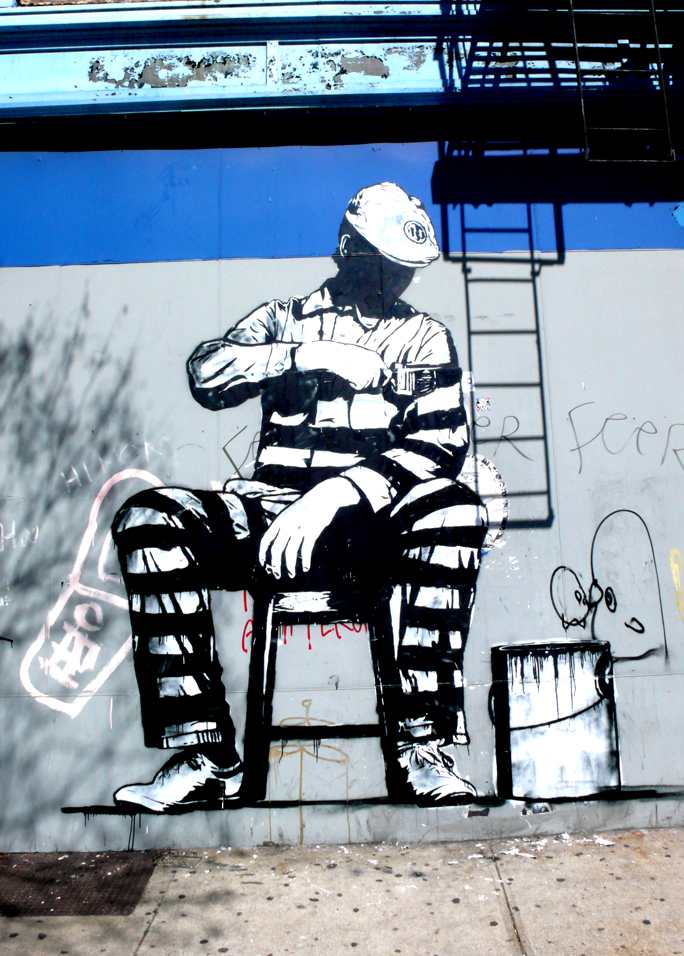 Break out the Prada sunglasses kids, the ever-clever and fun folks at Brooklynite Gallery have produced a show with two European Artists: DOLK and M-City, entitled “Eurotrash” 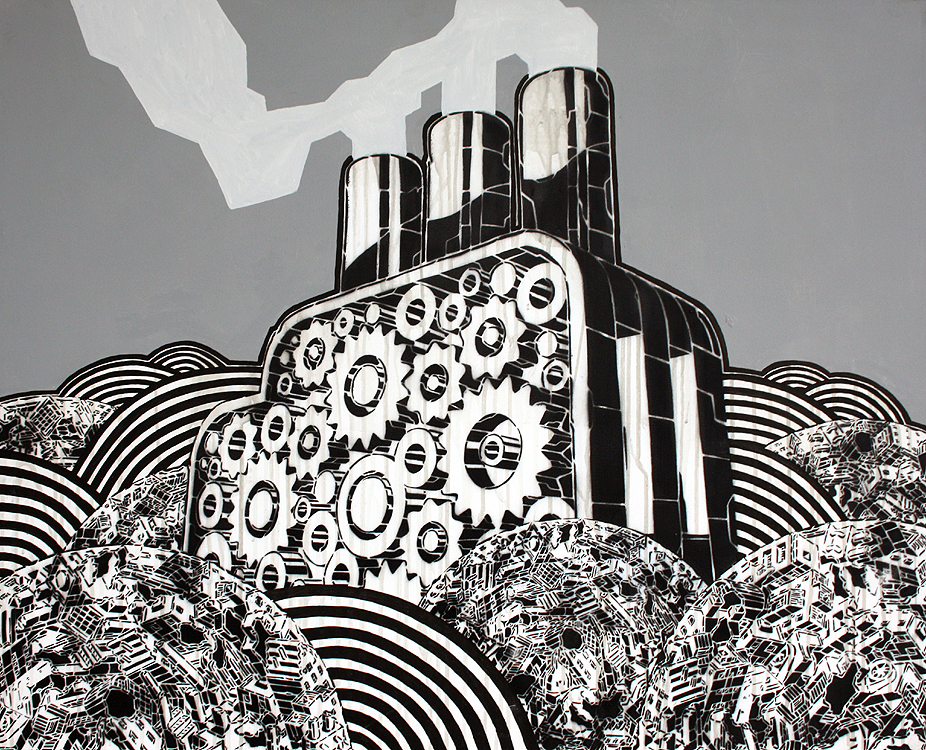 A new toaster design from MCity! – a “graphic brand of stencil artillery” Indeed, and wide enough for bagels!

But these artists are far from trash, although they are pretty Euro. Rae just liked that term because it is funny and because some correspondents in some neighborhoods are reporting that they are immersed in a sloshing sea of it.  Pure hyperbole, I’m sure. 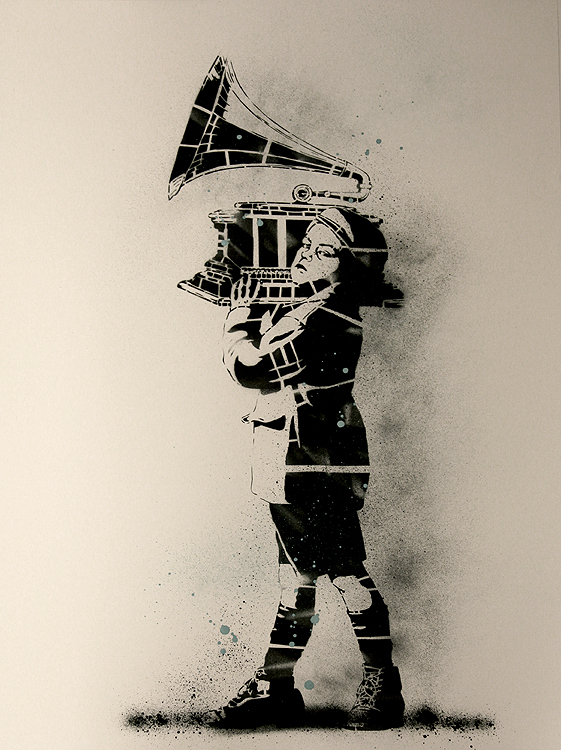 Dolk goes old school with this stencil subject and deliberately mucks it up for effect.

And now, back to me.  “Eurotrash” makes me think of the 1980’s, when the term first stuck and wealthy young Europeans living in New York were chronicled in a column titled “Eurotrash” by Taki Theodoracopulos in the now defunct The East Side Express.  Ahhhh, visions of Lacroix pouf skirts and slick men in ponytails with big long thick cigars swell to mind. 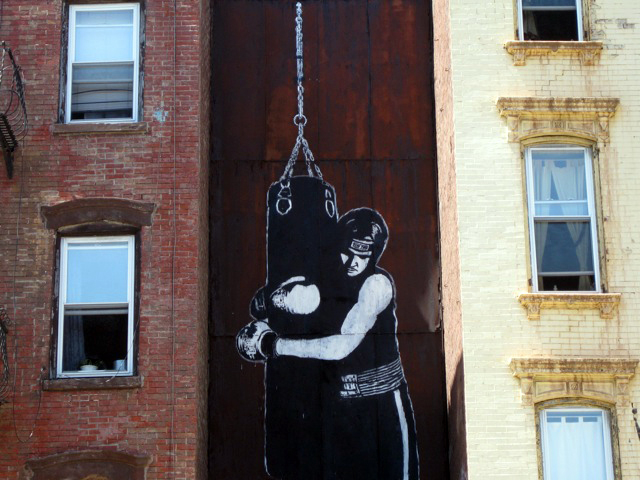 A KNOCKOUT! Excellent placement for this gigantic DOLK piece in BK!

And NOW, back to me. And then came TECHNO and TRANCE and it was all over the big Euro-club, exalting Eurotrash to an international lifestyle embraced by a sh*tload of people. What do you need to make a good ET dance song, you ask?

1. Powerful synth riffs that create the hook of the song, and hi-energeee massive arena-style walls of sound, 2. Rapping in a military and/or ganga fashion, preferably by a strapping black German with a gap between his front teeth, 3. A soaring wailing female vocal about sexual availability, preferably with a German accent or in a Nordic language emitting electronically from a distant chilly erotica planet 4. A galloping baseline and some sirens and a solid two minutes of intro and outro beats for mixing purposes. 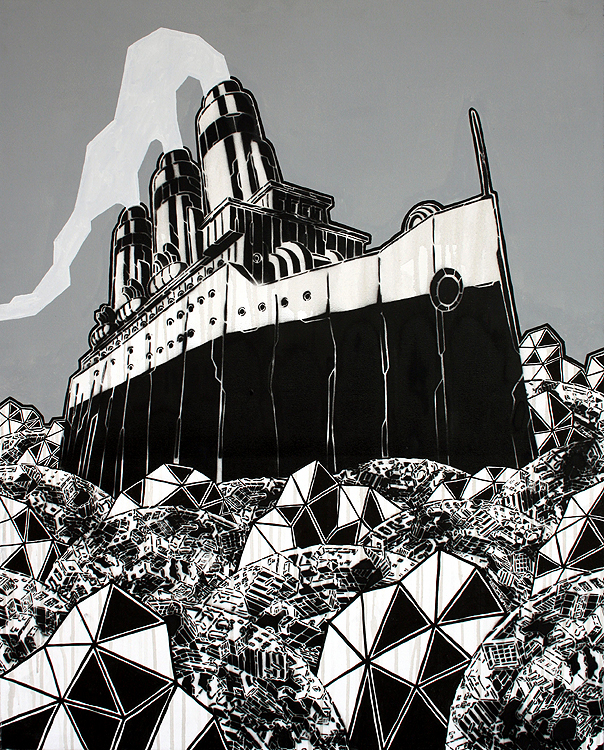 M-CITY, despite the heavy monocromatic industrial quality of his stencils, is a funny guy. Here the Manchurian Helena II plowing through a sea of beach umbrellas. I think. 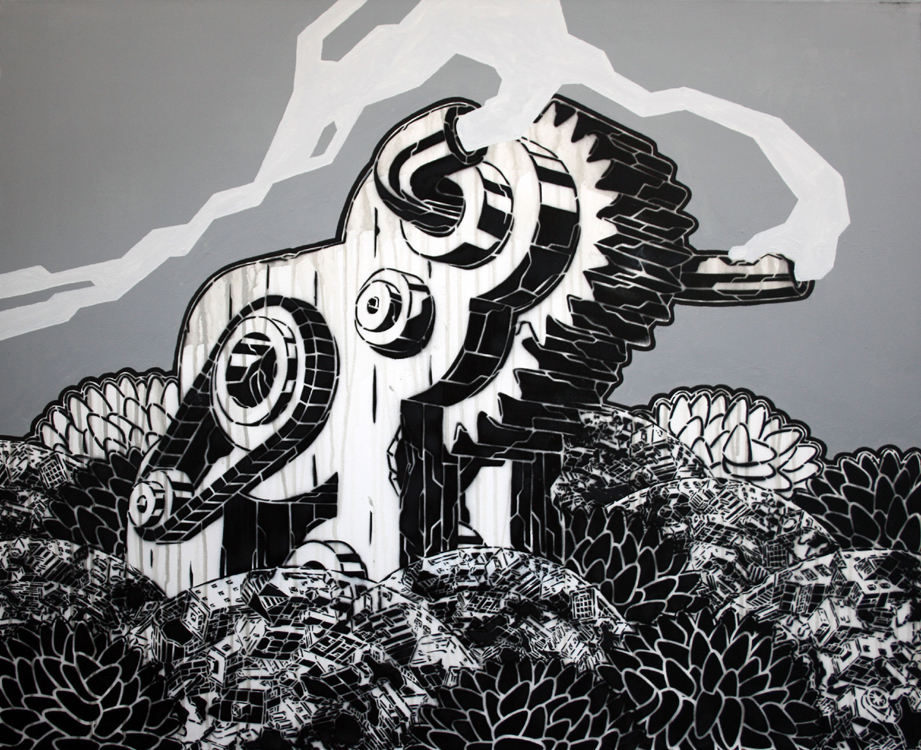 Zeromancer have a song called “Eurotrash” where they sing: We are nothing but Eurotrash,
We take Plastic we take Cash! Get the ringtone here! 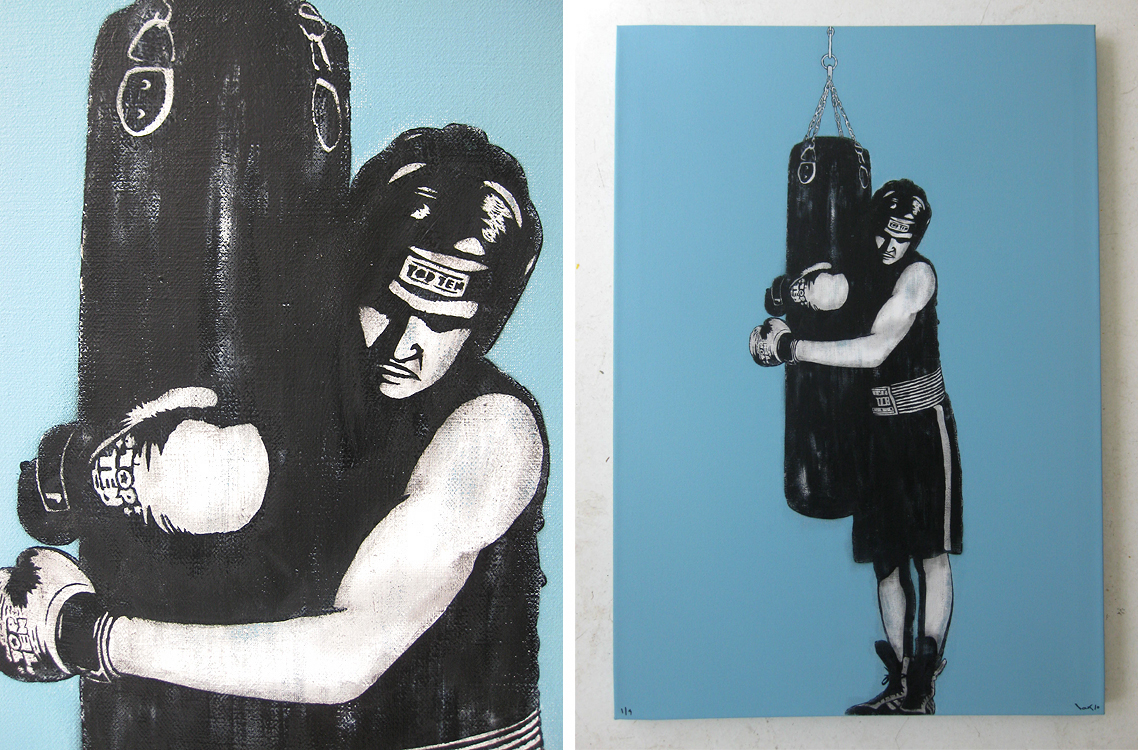 "The Boxer" - a pretty stunning canvas by DOLK tomorrow at Brooklynite.

Tell you what. Why not hop on the L train headed toward Brooklyn and ride just a few stops past Bedford Ave and go to BedStuy and see the show for yourself?  It’s not as good as Mr. Brainwash of course but there will be cameras to capture your look – even a live video feed!  Sorry no bottle service.

Special thanks to Jaime Rojo for background research on this important topic.

Can’t make it to the show? Check out our
STREAMING LIVE COVERAGE of the opening
on our website: BrooklyniteGallery.com

Giulio Vesprini on the B-Ball Court in Fermo, Italy
A basketball court in summertime is a proving ground for skill, a place to kill time with friends, and sometimes a launchpad for dreams of going “professional”. Here in Fermo City in Northern Italy, ...
BSA Film Friday: 05.27.16
Our weekly focus on the moving image and art in the streets. And other oddities. Now screening : 1. I Don't Expect To Be A Mother, But I Don't Expect To Die Alone: Olek and Michelle P. D...
Banksy’s Final Trick
A Genuine October Surprise for New York Street Art Friends and Foes Alike. In a series of communiqués beamed from his website, the global Street Artist Banksy gave graffiti and Street Art followers a...
Sebastien Waknine: “Learning from Migrants and Refugees” In Barcelona
Owing to the scarceness of resources that are usually allotted to those who arrive as refugees, Street Artist and muralist Sebastien Waknine relies solely upon the thinnest piece of charcoal as h...
Images of The Week: 03.09.14
Hi Everybody! Two things - We saw a big uptick in next generation Street Artists this week in the Armory Week shows and wrote about it yesterday; New High-Water Mark for Street Art at Fairs for Ar...
Brooklynite Dolk Eurotrash Jaime Rojo M City Steven P. Harrington