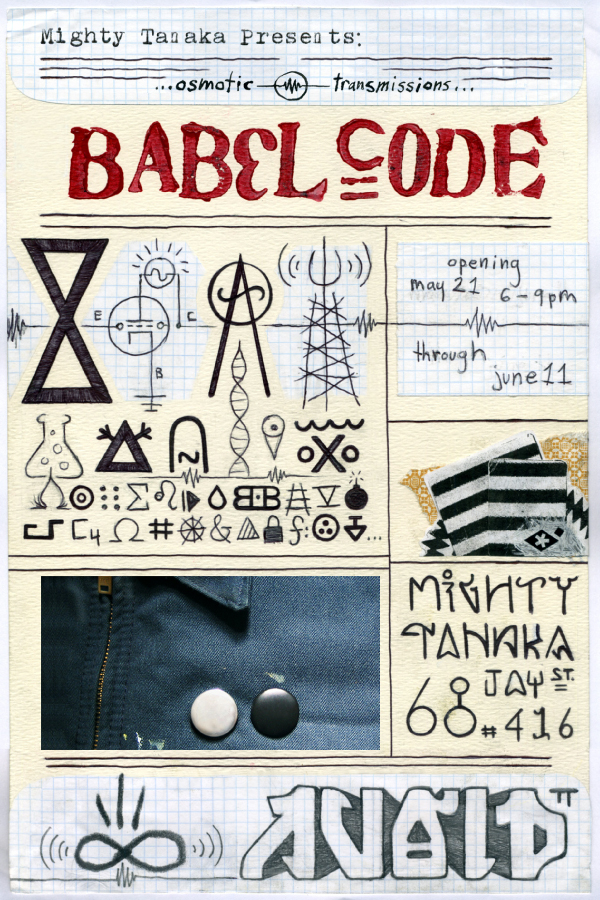 Brooklyn, NY – April 24, 2010 – Thought provoking Street Artists AVOID pi & infinity team up for their first duo show together entitled Babel Code <osmotic transmissions>.  Peering through a semiotic Petri dish intermixed with sub-conscious communication, Babel Code uses primitive and mystical sources as well as runic references, which charges the works of art with a power and energy beyond the objects themselves.

Babel Code challenges the viewer to reconsider the basic notions of communication and cultural change, while providing a closer look into the artist’s own techniques of non-verbal interactions. Building upon a symbolic language shared by both artists, their influences range from a resonance of mixed signals and errant transmissions.

Their symbolism ranges from introverted Platonic deliberation and chemical structures to numerology and DNA; anything and everything from hobo marks and astronomy to grammar diagrams and physics equations.

AVOID pi was born the year IBM released the Personal Computer. He was raised in South Carolina, on a diet of freight trains, deep forests, punk rock, and DIY. He moved to the coast on the eve of the millennium to study both graffiti and philosophy among the flooded streets of Charleston. In 2006, he moved to New York in order to interact on a global stage. He is working on a language of abstractions in the public space, as well as empowering the political potentialities of graffiti.  www.avoidpi.com

infinity was born in 1962 in the Midwest. His family moved to Manhattan in 1970. Obsessions with comic books, heavy metal, and graffiti eventually embraced studies in expressionism, semiotics, and the sciences. He graduated from the University of Wisconsin at River Falls in 1986 and The School of Visual Arts in 1989. He has followed an erratic career path, but always continued his aesthetic and scholarly research.

Street Artists At The Fairs For Armory Week NYC 2014
Not quite spring, the Art Fairs are arriving in New York ahead of the tulips. We strolled the impossibly long aisles and peered into the booths to find the folks who have at other times been called ...
Images of Week 07.19.09
Our weekly interview with the streets Uhh, uh-huh, yeah Its all about the benjamins baby Uhh, uh-huh, yeah Its all about the benjamins baby (photo Jaime Rojo) Does this remind you...
James, Karla and Billi Kid talk about Mom & Popism: Open to Public Saturday
Manhattan is turning into a Mall. There I've said it. In the 80's when I first got to NYC my best friend guided me through the canyons of Manhattan lamenting the pace of change, the cultural cornerst...
BSA Picks 19 Things to See at DUMBO ARTS FEST 2014
New York Clobbers Fall again and one of the finest examples of art in the public sphere has again returned to swing the aesthetic bat straight at your head with the DUMBO ARTS FESTIVAL. With it c...
Graff to Graphic: Destroy and Rebuild
Artist collective Destroy & Rebuild blasts past obstacles and finds opportunity through persistence on the street. True New York City is in the streets and in the hard-won winning grit of these...
Avoid Pi Infinity Mighty Tanaka