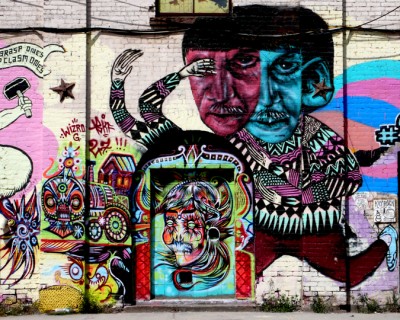 Deuce 7 and others (photo © Jaime Rojo)

Mystic Stylez
A show by Deuce 7

May 15th through June 12, 2010
Opening Reception Saturday May 15th 8 to 10
with after party hosted by PopGun booking featuring
THESE ARE POWERS

On May 15th 2010, Deuce 7, and some friends he hasn’t told us who yet, are repainting Secret Project Robot with an exhibition called MYSTIC STYLEZ. Needless to say the show will be sick…

The first time we saw his work we were walking back to Secret Project Robot and passed a street sign with a small wooden piece, a few days later he had hit the Williamsburg Bridge. Immediately we wanted to find him. It took nearly two year, in fact we couldn’t figure out who he was until he hit our building and we had Maya Hayuk introduce us. The rest we shall say is a happy history.

Deuce 7 has taken New York City Streets by storm. On first seeing the exhaustive detail of his work we wondered how he could possibly finish each piece in the open streets. His prolific and colorful, almost painterly works, are filled with Native American tribal references, images of insects, trains, horrifying alien invaders, references to 1950’s horror movie posters and video games like Galaga, beautiful and complicated symmetry and an appeal that seems to be apolitical and universal.

Deuce 7’s modus operendi isn’t in claiming space as much as in reclaiming, in fact, though his work has touched the heavy hitting spots- The Williamsburg Bridge, Lower East Side, etc. he seems to operate best in abandoned buildings, train cars in the Midwest, underneath and behind things; his art is often a happy surprise, it puts objects back into points of visual interest.