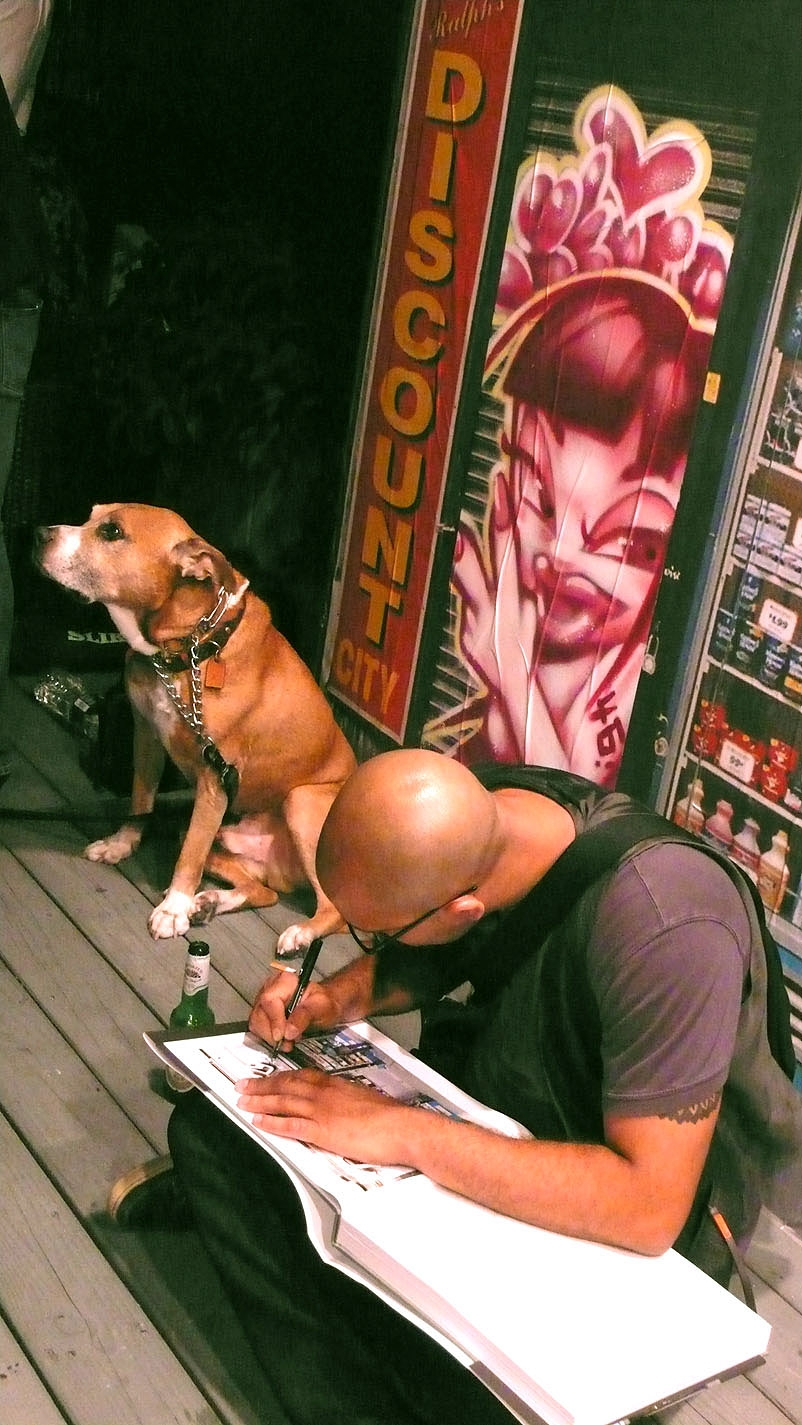 Manhattan is turning into a Mall. There I’ve said it.

In the 80’s when I first got to NYC my best friend guided me through the canyons of Manhattan lamenting the pace of change, the cultural cornerstones gone, the new soul-lessness that was going up in new buildings and neighborhoods. I said, “Get over it, are you kidding? This place is amazing!”

Now the pace of “progress” that has turned every small and mid-sized city in America into an interchangeable power strip of Olive Gardens, Radio Shacks, and OfficeMaxes has gradually infiltrated the culturally vibrant and wacky island. But it isn’t only Manhattan, it’s true in almost every neighborhood in the city – In fact, the chains are shackling most of our culture to a homogenized dullness that preys on low-paid workers elsewhere and creates low-paid workers here.  How many Mom-and-Pop stores have been wiped out by the undercutting prices and special tax considerations that Big Box stores have?

They started taking pictures of New York’s Mom-and-Pop stores a decade ago when they were out shooting graffiti. By definition, a Mom-and-Pop is a family-owned and usually family-run business with roots in it’s community, providing needed goods or services and jobs and wealth to it’s small ecosystem. The Murrays noticed that they were disappearing, rapidly.  It alarmed them and they published a book featuring those businesses call “Store Front: The Disappearing Face of New York”, featuring 250 images of these Mom and Pops.

A new show, open to the public this Saturday, features images from that book blown up almost to their original size in a “streetscape” and installed on a gorgeous rooftop. The twist with this show of storefronts is it also includes the work of 28 artists all over it, thanks to the curating skills of Billi Kid, street artist and entrepreneur.  We went to the opening of the event (read here) and then we had the pleasure of interviewing the authors and the curator of the show to get more of the backstory:

Brooklyn Street Art: How did the opening party go?

Karla Murray: The opening party was a huge success. We have to thank Liz and Genevieve at Gawker Artists for helping launch such a great event as well as Billi Kid for planning and curating the event. We have never seen our Store Front photos so big before, let alone be decorated by many talented graffiti and street artists. Lots of media and artists were there to celebrate the unveiling of the exhibit. We also want to thank Bear Flag wines who donated the wine.

Brooklyn Street Art: How did you come up with this unusual idea and then convince Jim and Karla to help make it happen?

Billi Kid: Jim and Karla’s book had been sitting on my coffee table for quite a while and of course, triggered the original idea. MOM & POPism was my fourth collaboration with J&K, our second in which other artists work over their images, so it came down to a matter of trust and love for the concept. To be honest, they jumped right in. No arm twisting on my part. If anything, we three held our breath while waiting for Gawker Artists, who presented the exhibition, to decide whether they wanted to commit their time and resources to the event. Liz Dimmit, our champion and curator of Gawker Artists, fought our battle hard and flipped the POWERS THAT BE over to the dark side.

Birds on a ledge by Cern (photo Jaime Rojo)

Brooklyn Street Art: Can you describe the process and materials you used to print these large scale repicas of storefronts?

James Murray: The process began by Billi Kid selecting the photos from our “STORE FRONT” book that he thought would have enough “negative” space for artists to paint directly on top of the photo but still maintain the integrity of the store. After Billi Kid told us his initial selection of images, we worked with him making the final selection. We based this decision on the actual image size because we wanted to use photos that we knew would be able to be blown up to that large size and remain clear. We then gave all the image files to Billi Kid so that he could do the math on every one of them and figure out how large the image would print. He also figured out what spaces the artist would paint on and assigned every artist a particular area to paint on. Billi Kid then printed out our photos in segments of 4 feet wide by 9 feet high on matte photo paper rolls using his wide-format printer. If it wasn’t for Billi Kid owning such a large printer, this project would never have gotten off the ground because it would have been too expensive to print at a local lab.

Ideal Dinettes, in business from 1953-2008 Brooklyn, 2004, by James and Karla Murray from “STORE FRONT- The Disappearing Face of New York”

Brooklyn Street Art: Were you ever afraid it wasn’t going to work out?

Billi Kid: Only in so far as the weather was concerned. When we kicked off the planning phase of MOM & POPism, the last thing we figured was a rainy July/August season. Who knew? We had considered the tremendous amount of work involved in getting this to look just right. I mean, Liz Dimmit actually committed to building 9 walls on the roof of Gawker Media HQ so that we could cover them with James and Karla’s beautiful photography. On top of that, we had to figure out the blown-up dimensions of each image and how to layer them up as wallpaper slices. It was definitely touch and go for most of the process, but the stars finally aligned in our favor.

Karla Murray: Billi Kid is one of the nicest and most generous guys as well as a talented artist. This is the 3rd time we have collaborated with him on an exhibition. The first was a graffiti/street art/photography hotel room installation at the Carlton Arms Hotel in Manhattan and the second was an exhibition called Underground/Overground at the Artbreak Gallery in Williamsburg. We also selected him to be part of an exhibition we are curating during Art Basel Miami called GRAFFITI GONE GLOBAL presented by SushiSamba Restaurants. His work, including the panel he painted as part of MOM and POPism, will be shipped down to Miami and included in the show that takes place from Dec 3-6, 2009.

Brooklyn Street Art: How important is community in a project like this?

Billi Kid: As curator, my first concern for MOM & POPism was to bridge the gap between graffiti/street art and how it is exhibited in a gallery environment. I wanted the public to experience it in it’s pure form, exactly how I see it when I walk the city streets. Secondly, I wanted to continue James and Karla’s “Store Front” conversation along with the sadness felt by all as we watch the disappearing face of New York along with the economic and artistic implications involved. And last, it was all about community. Bringing all of these talented artists to this roof was a dream come true. When working together, the community can go a lot further in spreading the love as far as I’m concerned.

Shiro and her buddy by her piece (photo Jaime Rojo)

Brooklyn Street Art: What conversation do you hope to spark about the significance of these businesses, and their disappearance?

James Murray: We hope to open people’s eyes to the disappearance of these mom-and-pop businesses and encourage people to shop in them and support them. Since we began the project of documenting these stores over 10 years ago, over half of the images which appear in the book have now closed. With the economy doing poorly even more businesses are threatened. These mom-and-pop stores are what makes each neighborhood in the 5 boroughs unique. They are the backbone of the community and when they close a little piece of history is lost.

Brooklyn Street Art: Do you think people are beginning to make the connection between corporate power, globalism, big box stores, and the killing off of Mom-and-Pop’s?

Karla Murray: We hope that people do make the connection between corporate power and big box retailers and the killing off of Mom-and-Pops. People often have the misconception that shopping at a big box is cheaper then going to a local store but it’s not true! Many store owners have told us that their prices are actually lower and the quality of their goods are better. These mom and pop store owners take pride in what they sell and stand behind their product whether its food or clothing or whatever. Many of these businesses have been handed down from generation to generation and the owners are proud to have their name attached to their store.

Brooklyn Street Art: Sometimes when you stretch your mind to combine art and artists in a new way, you can reach a new audience. Maybe you are letting more people know about these artists…
Billi Kid: Whenever I have a willing ear, I’m always talking about preaching beyond the choir. The work deserves and demands a wider audience. It’s beautiful to see and read how people outside of the graffiti and street art world reacted to MOM & POPism. Hallelujah!

Brooklyn Street Art: Now that the family owned stores are gone, do you see any hopeful signs in the development of the cityscape?
James Murray: Many family-owned businesses are still in existence so we remain hopeful that the cityscape will not change too drastically.

Brooklyn Street Art: What was the biggest surprise of the whole installation?
Karla Murray: The biggest surprise was all the rain we got while doing the installation. We knew going into this that the weather was not something we could control but we really were subjected to extremes. The boards were even blown over by a heavy wind/rain storm and had to be secured more tightly. When the artists were painting on the photos we had to erect “tents” out of tarps to keep them covered from the heavy rain storms. We even had to change the date of the opening party under threat of rain. Despite all this, everything worked out well and the photos and artwork held up remarkably well to the elements.

Brooklyn Street Art: Work and logistics aside, it looks like you had fun putting this one together!
Billi Kid: OK, scratch everything I said so far! Hell yeah!!! It was all about having fun! Seeing how much pleasure each artist had working and looking over each other’s shoulder was my finest moment in bringing MOM & POPism to life. At the end of the day, we ALL have to enjoy what we do, because it shows.

MOM & POPism will be open to public on Saturday, August 15th from noon to 4 p.m. Additional exhibition viewings are available by appointment throughout August.

Previous projects that combined the talents of James and Karla and Billi:

An article James and Karla wrote about Billi in Peel Magazine

The room Billi did at Artbreak Hotel with James and Karla

Underground Overground with Billi, James and Karla and Cern

See an exhibition of photos from the book at the Clic Gallery now through September 27, 2009