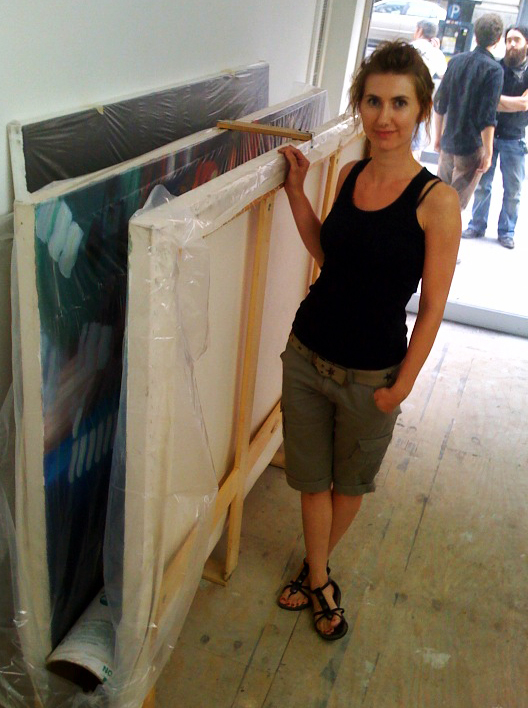 You gotta roll with the punches just to make art happen in New York.

BSA headed by bicycle across the Williamsburg Bridge Wednesday night to to take a look at the newly installed Mighty Tanaka pop-up show on 14th Street, home of 99-cent stores, baseball cap/T-shirt vendors and the Salvation Army.

14th Street is the dividing line of Manhattan for people to decide where Downtown begins. It used to be more rough and sketchy and home to good deals on dish sponges and 5 packs of underwear, but like every other part of Manhattan the little discount stores are now uneasily squeezed by newer neighbors like Starbucks and Whole Foods and 14th street West is terminated by the platinum-plated Meat-Packing District.  Tough luck.

Mighty Tanaka, who’s curating this show, found this raw space in a recently gutted low-rent retail space that hasn’t been re-rented out yet but still retains the old clothing store sign at the entrance that says “Dapper Dan’s Imperial”.  Tonight (7/17) it will be Dapper Dan’s Imperial Gallery.

Hold it now, hit it! The symphony starts to practice while the painters wait for their turn. (photo Steven P. Harrington)

We rolled up to the curb to find a clump of people outside on the sidewalk and a symphony!  Literally.  All manner of stringed instruments.  Alex explained hurriedly that the landlord forgot to tell him that there is a symphony that also practices in the space on Wednesday nights, so, ooops, no drilling or hammering or anything that could interrupt the overture – until 10 p.m. Roll with it.

No matter, we were allowed a few quick preview pics, had a quick talk with the artists, and even heard some Mahler.  Hopefully, this mixup is not a PRELUDE.

Brooklyn native JMR has been building his mural skills on the streets of Brooklyn for a couple years now, as well as in lobbies, hallways, and hotel bedrooms and backyards.  His abstract style is clean and curvilinear, with pockets of color and pattern in a loosely rolled coil, the empty spaces as important as the filled.

Polish born Alexandra Pacula, not a street artist, focuses her topics frequently on the streetscapes of New York – the blurred glare of lights that dance before you and confuse you as you navigate drunkenly through late-night Gotham. Visual intoxification, she calls it.

“My giant Times Square piece is in here” Alexandra waits for the musicians to leave so she can hang this behemoth.  (photo Steven P. Harrington)

The pairing of the two artists, billed as a dual solo show (good one, Alex) is complimentary – his clarity of line and her blur of impressionism, his turbulent understructure and her shimmering cosmopolitan skin.  Painters both, and lovers of New York.

JMR took a minute today to talk about himself and the show with Brooklyn Street Art.

Brooklyn Street Art: Did you get to talk to any of the practicing musicians about your work?

JMR: They finished up at 10 o’clock and I was all about getting the show hung. So I just started arranging pieces while they were breaking down and stayed focused. Next thing I knew they were all gone. I like classical, but it’s not something I search out.

Brooklyn Street Art: How long have you been in Brooklyn?

JMR: I was originally born in Brooklyn. My family moved to Staten Island when I was 5. I moved back myself in 1999.

JMR: Yes. What influenced me more was graffiti that covered the BQE. Also, in SI there were great abandoned factories that writers would spend weeks painting pieces. I spent time in those understanding color. I always felt it was my shortcoming.

Brooklyn Street Art: Sometimes it takes a minute to discern that your work has a portrait buried inside. Usually it is a female. Anyone you know, or are they from your imagination?

JMR: I’d say its 50/50. there’s definitely some ambiguity there and I like that. My art is very composed and balance is important. The same goes for the subject matter. For the most part they’re total strangers.

Brooklyn Street Art: You spend a lot of time drawing?

JMR will be showing some canvasses with a more layered, collaged effect. (photo Steven P. Harrington)

Brooklyn Street Art: Is collage part of your process before painting?

JMR: I started collaging because I wanted to remove the pressure of the white canvas. It adds a great element for me. It’s not accidental, but it’s less controlled than the precise lines I use to express my ideas.

Brooklyn Street Art: How does the city affect you now?

JMR: I maintain a very romantic feeling for the city, but the everyday hustle and reality makes me dream of living in the country. It’s hard to get headspace here. Sometimes that’s good. But so is nature. Especially for an artist.

The Power of Color via Street Art, Graffiti, and Murals
No doubt it is the grey days of late winter that is making us think about this as we brace for the next snowstorm, but today we’re considering the impact that Street Art color has on architecture that...
Images Of The Week: 03.30.14
Here's our weekly interview with the street, this week featuring Adam Dare, Bunny M, COL Wallnuts, Don't Fret, Icy & Sot, JMR, John Ahearn, Judith Supine, Michael McKeawn, Miss Me, Mr. Toll,...
The "Aqueduct Murals" Are Off and Running!
“He’s pissed off. He’s like… he has an attitude. He’s ornery. In my work I’m always looking to relate my own feelings to the images that I see and try to express them through painting.” Chris Sta...
Street Artists At The Fairs For Armory Week NYC 2014
Not quite spring, the Art Fairs are arriving in New York ahead of the tulips. We strolled the impossibly long aisles and peered into the booths to find the folks who have at other times been called ...
Year in Images 2008
Paradigm Shifting and Cave Writings Looking back at the powerful changes in '08, it's not hard to see their reflection on the Brooklyn streets, which may serve as tea leaves revealing the messages sw...
Alexandra Pacula Holly Stevenson JMR Mighty Tanaka