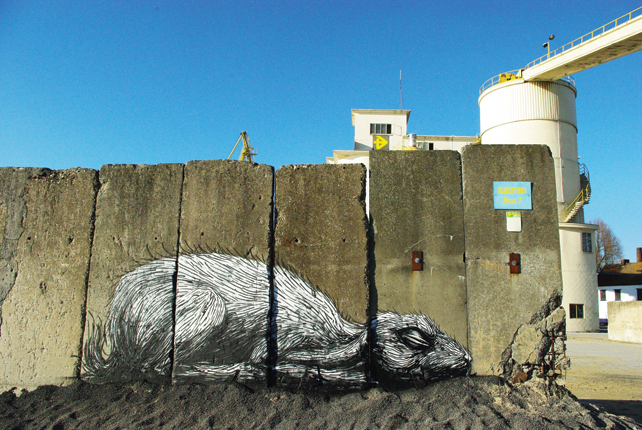 This May, Factory Fresh goes wild as it opens its doors to the zoetic art of Belgium-born artist ROA. The artist’s organic animal forms, huge in both their reputation and impact, will grace the walls of the gallery this May, reminding spectators of the forgotten natural world beneath the city’s streets.

Through his large-scale installations of very wild wild-life on the industrial canvas of the city, ROA produces a juxtaposition of the overtly natural against the mechanic that is both feral and nostalgic, a reminiscence of what the world used to be before cement and concrete. ROA is famous for his large black and white works that depict both the outer and inner appearance of rodents, bulls, roaches et al, who slumber on garage doors and cement blocks, copulate in abandoned alleyways and decay on brick walls. His work is sprawling and uncontainable, and will be filling Factory Fresh as such, barely pinned down to found materials, clustering in our corners and escaping out into our surrounding streets.

ROA began pulling animals out of the depths of the industrial world in his hometown of Ghent, Belgium, where he explored the area around his home and was inspired by the life that lurked in its lonely smokestacks. His resulting work snarls at you from wherever it prowls, awaking a visceral reaction that comes from seeing something familiar yet unknown, an uncanny portrayal of the animals within and around ourselves that our contemporary lifestyles have made null.

Since his Belgium beginnings, ROA’s work has hit the ground running like the animals he depicts, scattering on four legs all over major cities, showing up on the walls of galleries and abandoned factories alike. His work has been shown in London, Berlin, Warsaw, and sold out in two days in Paris. He now returns to New York, arriving at a very different kind of factory than the industrial wastelands his animals are known to inhabit, ROA’s show at Factory Fresh promises to be untamed and animated as his pieces.