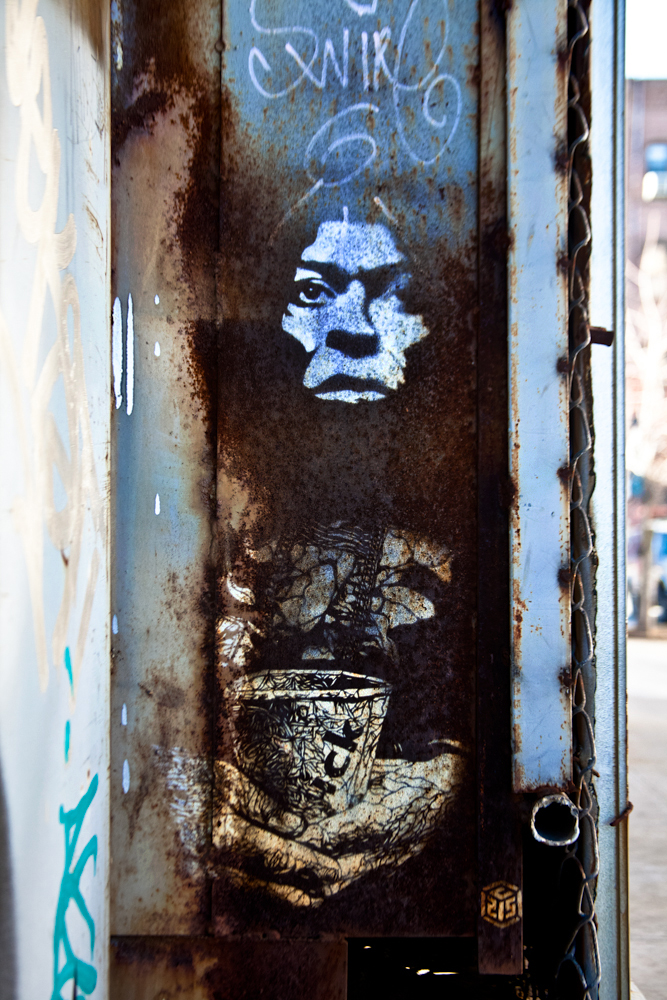 Blending passions for Street Art, Urban Photography, and Jamaican Culture in a way that honors all three.

New York Street Art has so much variety due to it’s incredibly varied populations and neighborhoods, among other factors.

You are never going to get bored walking through New York’s boroughs because the sheer number of languages, cuisines, fashions, and music you will experience will continually surprise you and expose you to great new people.

Street art fan and photographer Carlito Brigante (aka Charles Le Brigande) has been hanging in Bed Stuy Brooklyn for a few years, and has fallen in love with the music and history of the Jamaican soundsystem. A recent piece he did in the street recalls the big mountains of music speakers that pump loudly in the street  with ska, reggae, and rocksteady music spun by a handful of disc jockeys engineers and MCs.

In addition to two of videos of that corner deli installation, Carlito engaged neighbors and shot pictures of them dancing in front of the paste-up. With a special affinity for the culture and the people, he loves street scenes that capture the flavor of this neighborhood.

Brooklyn Street Art: What is a “soundsystem” and where did they begin?
Carlito Brigante: A soundsystem can be described as a means to bring the music to the people. In Jamaican popular culture, sound systems first appeared in the ghettos of Kingston in the late 40’s, way before the birth of ska, rocksteady and reggae music. Poor people could not afford the high prices of jazz and rhythm & blues (R&B) concerts organized for the wealthy elite and tourists, so sound systems sprung up. DJ’s would assemble large heavy speakers, power amplifiers and generators and blast music all night in the streets.

Brooklyn Street Art: Can you talk about the genesis of the “rubadub session” video and the wheatpaste? What was the aim?
Carlito Brigante: The rubadub session project is a tribute to the Jamaican sound system culture. It was my way of bringing an unfamiliar art form (wheat-pasting) and combining it with a familiar cultural symbol (the soundsystem) as a gift to the neighborhood in Bedford-Stuyvesant, Brooklyn. One day I was walking-by a laundry in Bed-Stuy, and the shape of the wall reminded me of a huge speaker. I immediately thought of doing a piece representing a sound system there.

Brooklyn Street Art: It’s great how you feature people interacting with the art and with each other. What inspires you most about the project?
Carlito Brigante: The idea was to recreate the mood of a Jamaican soundsystem and capture people’s reaction. This corner is always very busy, people are hanging around there all the time, so by pasting-up on this spot, I knew that people would relate to the piece and would interact with it. I wanted to make them dance with no music!

This image he took of Trevor during a huge block party inspired Carlito to learn more about the soundsystem culture. (photo © Carlito Brigante)

Brooklyn Street Art: The neighborhood of Brooklyn called Bed-Stuy certainly has roots in the Jamaican soundsystem. Can you talk about your experience of living here?
Carlito Brigante: This piece was directly inspired by a personal “Bed-Stuy/Jamaican” experience. Two years ago during a block party, I took a photograph of a natty dread skanking in front of a massive wall of speakers. I mean, every time I go out to take pictures here, I find amazing material. Bed-Stuy is full of surprises. It is an ongoing source of inspiration for me, from a visual standpoint but also from a human perspective. I have met so many incredible people in this neighborhood and taken a good amount of images.

Brooklyn Street Art: How is this project related to your passion for street art and urban photography?

Carlito Brigante: With the rubadub session, I wanted to blend my passion for street art, urban photography and Jamaican culture. That’s the reason why I have created this “background”.  I knew that the spot was pertinent, that the piece would generate genuine reactions and that I would be able to take great photographs.

It was great to see people dancing and jamming throughout the whole process.

Paris Dispatch 2 : C215 and the Guys on the Street
We return today to the streets of Paris for Dispatch 2 with Norwegian photographer Tor Staale Moen, who tells us that the streets are alive with stencils and aerosol paintings as much as ever. Ou...
The Genius of C215 In One Storied Tome : La monographie
A rich and storied collection from one of the streets most loved modern stencillists is C215: La monographie. C215. La Monographie. Éditions Albin Michel. Paris 2015 (photo © Jaime Rojo) On the st...
Amsterdam Dances with Graffuturism and Stencil Masters
Amsterdam rocked the decks this month to celebrate urban contemporary art and street art in the Netherlands with visual and music based events giving artists many platforms to shine. BustArt and Fa...
Liliwenn on Island in Tunisia For Djerbahood with C215, El Seed, ROA
The Djerbahood project is midway through its stated goal of having one hundred artists from 30 countries come to paint in this North African island in Tunisia called Djerba. Organized by the same folk...
Images of the Week 11.15.09
Our Weekly Interview with the Streets A new installment in Specter's series of portraits of New York's homeless individuals (photo Jaime Rojo) Specter (detail) (photo Jaime Rojo) ...
C215 Carlito Brigante