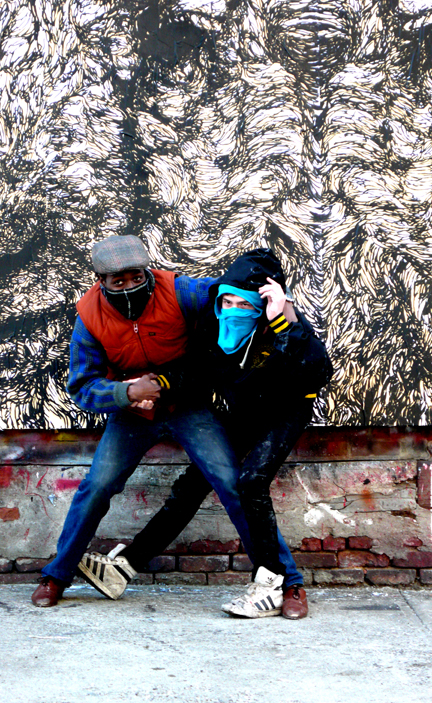 Culminating weeks of prep, “Mutual Discrepancy” goes up, with both artists feeling good about street art in the new year.

On Friday two young and hungry New York Street Artists combined their artistry, critical intellects, and kinetic energy (and questionable dancing skills) to help define street art for a new generation on the cusp of the 2010’s.

In an age of shifting definitions in the art world, the Street Art world, and, well, the whole freakin’ modern world, you can take heart to know that the kids still know how to have fun, and some of them are willing to work their butts off in pursuit of a vision.

On a 30 foot by 8 foot luhan-wood billboard in Brooklyn, Gaia and NohJColey brought their A Game to the street and auspiciously stretched the definition of wheat-pasted smart-aleck wall-wrecking.

The wall is curated by Brooklyn Street Art for Espeis Outside Gallery.

Both New Yorkers, they communicated since Thanksgiving via email while Gaia was in school in Baltimore. They traded sketches, ideas, pictures, opinions – and when Gaia’s winter vacation started, they hung out at each other’s studios and kitchen tables planning the collaboration. Both guys had labored over their hand drawn and hand painted pieces for few weeks, so when it was game day, it really felt more like graduation.

Whoops, piece of it ripped. No prob, just lay on the paste (Gaia) (photo © Jaime Rojo)

It was cold on the street yesterday, but no one cared and the mood was celebratory. NohJ even refused to eat because he was too excited to put his work up – eventually he did eat though.

Horsing around and doing bike tricks and break/dip/jerk dancing of course was a periodic pursuit by galloping Gaia so the work got interrupted by Major Lazer and Free Gucci once in a while. We think it was the cup of coffee that pushed him over the edge – you might as well give him a dumptruck of cocaine – the kid was jumping around like a long-tailed-cat in a rocking-chair convention.

NohJColey had some last minute cutting to do of his pieces on the floor inside where it was warm. (photo © Jaime Rojo)

Meanwhile, on a totally different wavelength, NohJ was chilling to ear-blasting jazz from Art Blakey and the Jazz Messengers – giving him a valium-nuanced, snappy kind of gait.

Brooklyn Street Art: They really look like animals from over here
Gaia: Yeah they don’t look like sh*t when you’re close to them.

Brooklyn Street Art: It looks like you did some mirrored lambs heads.
Gaia: Yeah. I did this mural in Baltimore which was a bear head and then a cow head on another wall, and all the kids at the pre-school thought that the bear was either a seal or a dog.
Brooklyn Street Art: I thought that big bear you did looked like a woodchuck.
NohJ: I always know what your animals are though.

Gimme that sheep! I wanna have it! Gaia lends a hand to the giant hand (photo © Jaime Rojo)

Brooklyn Street Art: So why did you use this ochre color, usually you use just black and white.
Gaia: NohJ and I had talked about something that would tie everything together and make it a little more continuous. I figured I’d just do the color ochre to tie in with the rest of his pieces, so it would make it a little bit more congruous or fluid between the two of us.

Brooklyn Street Art: What’s this additional paint layer you are putting into the background on the wood right now?
NohJ: Basically it’s to add dimension. That’s it.
Gaia: And texture…
NohJ: I mean the wood has texture but..
Gaia: It’s a trope.
Brooklyn Street Art: A trope?
Gaia: What were we calling it before? Distressed! It’s a distressed trope. It’s a trope of distress.
NohJ: I like the border on the far right, it’s getting into the “Sepia Zone”.

Brooklyn Street Art: How long have you guys been planning this piece together?
Gaia: This? Like for a month or two.
NohJ: Yeah like two.

This screen almost looks like it is reading his vital signs. Looks like his heart may need some regulation (NohJColey) (photo © Jaime Rojo)

Brooklyn Street Art: NohJ, what’s the New York Stock Exchange logo thing on the little screen?
NohJ: He’s a stock broker. He’s like totally f**king obsessed with trading stocks. He cares nothing about family. He has a new-born son, he cares nothing about it. He just wants to trade stocks. That’s pretty much what it’s about.

All the added elements, the watches, the hands with the glass of wine and the cell phone, those are what the person is drawn to and pretty much what they care about on a daily basis. Now there is a lamb, a mutated creature in their midst. But they are so caught up with the pristine life that they’re unable to embrace something or someone that is different.

One of Gaia’s favorite symbols, and one of his hands. (photo © Jaime Rojo)

Brooklyn Street Art: Your styles are so different from one another. Do you feel like it was difficult to collaborate on a piece?
Gaia: Uh, no, not at all.
NohJ: Not really.

Gaia: I actually like when you have collaborations when you have an initial idea and there isn’t too much communication between the two collaborators because then you don’t too much overthink it and it starts to fall apart. You don’t get constipated, you just do your thing.
NohJ: I felt a bit constipated, in the beginning.
Gaia: I mean it’s always tough to begin something.
NohJ: I only felt that way because I’m working with your lamb and I’m like, “What kind of imagery works well with a lamb?”
Gaia: That’s interesting because I knew exactly what I was going to do – two lambs. And you had to do a response to that. I don’t know if that’s fair.
NohJ: Yeah it’s fair.

Gaia in an Empire State of Mind (photo © Jaime Rojo)

Brooklyn Street Art: Well somebody had to start the process.
Gaia: Yeah, I guess. I’m just always a little sensitive about collaboration because of school.
Brooklyn Street Art: It’s because you’re a sensitive fella.
Gaia: I don’t know, I try to be. It’s my….it’s how I get girls.
NohJ: Oh that’s how you do it.
Gaia: That’s how I do it.
NohJ: Ahhhhhh, maybe I should.
Gaia: No man, you’re always like back in the corner, you’re like the whisperer guy with the girls.
NohJ: But that’s sensitive too.

JUBILATION!  Gaia and NohJColey do a few tricks for the street fans (photo © Jaime Rojo)

THE FINAL PIECE “Mutual Discrepancy” by NohJColey and Gaia

Here is “Mutual Discrepancy” the short film by Nicolas Heller, a NYC/Boston filmmaker who likes to explore personalities on the street.

An aspiring director, Nicolas worked with Gaia on a short over the summer of 2009 and is in the process of doing a documentary on him. You can a short video he did of Gaia and see some of his other film work at NicolasHeller.com.  Many thanks to Nick for his skillz.