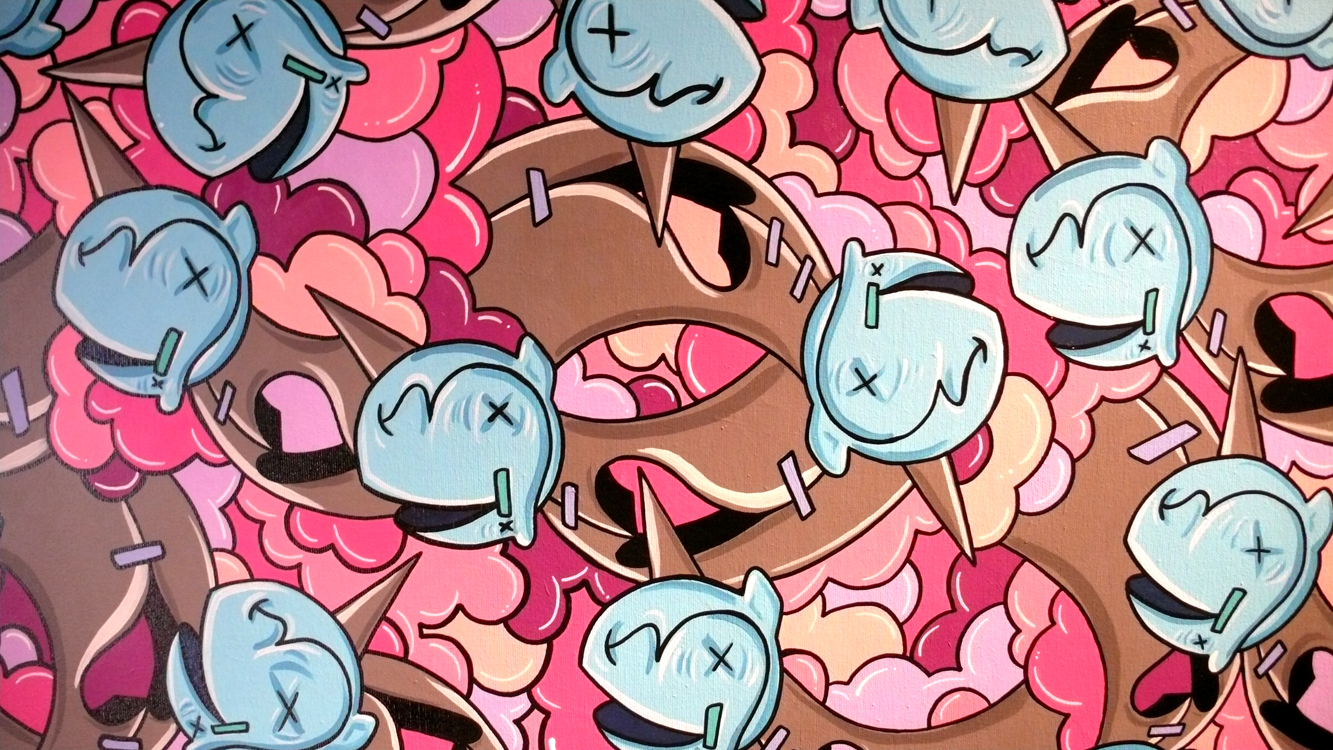 – you wouldn’t think those things have much in common – although Puppetry of the Penis kind of ties many of them together, now that I think of it.

Opening tonight at HiChristina, a small but densely packed show with LauraLee and Bishop203 will entertain those A.D.D.-addled button-punching phone-surfing multi-tasking Millenials and GenY Early-Adopters who have infiltrated large swaths of previously normal neighborhoods in Brooklyn.

HiChristina is a lively gallery run by Christina Ewald and Fritz Donnelly, two fun-loving arts fans who run a performance space/community space/gallery – all with a flair for ironic fashion statement.  The space on the main drag of Grand Street (with marquee by LauraLee Gulledge), straddles Williamsburg and Bushwick and has no shortage of entertaining and quirky ideas for you if you care to partake in their mayhem.  Transplanted from Orchard Street in moneyed Manhattan, HiChristina won’t indulge in any white-box fluffery.

Starting tonight, by way of engaging minds and making people laugh, they are featuring five different themed events from Tuesday to Sunday that welcome and embrace.  Briefly here is a list of the events (more at bottom) -and of course you’ll also see the work of LauraLee and Bishop203;

Each evening there is a very small suggested donation so if you are looking for Therapy or Geeking out – you’ll be able to enjoy it. (Check links at the bottom)

First we talked to Bishop203, who will be showing a number of new canvasses featuring his Bengel character.

Brooklyn Street Art: Tell us about the HiChristina Gallery.
Bishop203: I met the “HiChristina” crew last year through my good friend Karat. They had a space in the Lower East Side but moved to Brooklyn last March. They are some crazy and amazing folks. Always doing some silly event that will end up making you laugh until your cheeks hurt.

Brooklyn Street Art: Who is this little wizardy guy that you create?
Bishop203: I made this character to represent me on canvas. I call them “Bangels” (Bishops’ Angels). I made them big-headed lanky guys with empty hearts; although when I put them on the streets I consider them to be more of Brooklyn’s Angels.  Hopefully making someone smile as they walk by (or pry them off the wall).

Brooklyn Street Art: When do you find time to create these pieces that are at the show?
Bishop203: I do most of my canvases and design work at my job. I work what most people would consider a crappy third shift job in an apt. building working front desk. I love it because it gives me the freedom to play and paint. It’s like scheduled studio time that I get paid for!

Brooklyn Street Art: Looks like every night this week has a bonafide theme. What night will be the most fun for you – Nude Figure Drawing or Fake Therapy Night?
Bishop203: Damn. Good question. I am actually really looking foward to the puppet show. Though the fake art therapy sounds pretty amazing.

LauraLee is a prolific artist and illustrator who will show about 100 of her drawings, paintings, renderings.  Stylistically she ranges from children’s book illustrations to the New Yorker, depending on the project and her mood.  She also does a bit of street art.

Brooklyn Street Art: You have a great variety of styles that you work in – do they reflect your mood or your interests?

LauraLee: With each new drawing idea I have I try to utilize whichever style will suit it best, hence there is a lot of variation.  For example, I like diffusing serious topics by drawing them whimsically. Or I’ll take sappy material and simplify it so I can tone it down.  Or I’ll just let myself experiment and play with technique after I’ve nailed down the basic composition.

Drawing in different styles keeps me on my toes and forces me to always be trying new things.  (I suppose I have a fear of falling into a rut!) And I’m very much influenced by the stimuli I’m encounter from day to day, whether it’s an art show or a scenic project or a graphic novel I’m reading.  I encourage myself to incorporate as many new techniques into my visual vocabulary as possible.

Brooklyn Street Art: Is it true you have a graphic novel coming soon?

LauraLee: I am indeed working on a graphic novel!  I’m writing and drawing a 190 page debut graphic novel for Abrams, specifically with their young adult division.  It’ll take me the next year to draw and it will come out in Spring 2011. It’s called “Page by Paige” and it’s about a redheaded girl from Virginia who moves to New York and wants t become an artist…autobiographical to say the least!  It will blend images of reality with the imaginary much like the introspective drawings I’ve become known for.

Brooklyn Street Art: And you design Christmas windows for Macy’s too?

LauraLee: I am a Christmas elf!  I am a scenic painter for a design firm that creates a variety of holiday window displays around New York and beyond. We have fabulous designers that work with Macy’s to design the windows themselves, and then a whole studio of artisans such as myself that actually bring their designs to life.  (Carpenters, sculptors, props, animators, etc)  This will be my third season as the Macy’s scenic painter, and I’m thrilled!  This years’ design is great. There is lots of airbrushing and glitter!

THE WEEK’s EVENTS at HiChristina

Vitaly Tsarenkov aka SY: For the "Love Of Nature" in Chelyabinsk
From the city of Chelyabinsk, Russia, at the Urban Morphogenesis festival, we see constructivism of an ecological nature by Vitaly Tsarenkov aka SY. Vitaly Tsarenkov aka SY: "Love Of Nature". Urb...
Luca Ledda, Carnivorous Plants, and "Gulia Urbana" in South of Italy
“Gulìa Urbana” is what its called here in Mangone, Calabria in the South of Italy. Nestled in a wooded mountainous area and surrounded by agriculture and small vineyards, the festival for the roughly ...
BustArt Knows What Time it is in Le Locle : Swiss Time
Bad weather and two broken lifts later – Bustart has created this tribute to the precision of Swiss watchmakers in the small town of Le Locle (population 10,200) in the Canton of Neuchâtel in Switzer...
BSA Film Friday: 05.11.18
Our weekly focus on the moving image and art in the streets. And other oddities. Now screening : 1. RERO, Hendrik Beikirch, Kouka and David Mesguich at Montresso Foundation in Morocco 2. TWOONE...
Said Dokins Creates Illuminated Sculpture in Querétaro : "Refraktur"
Mexican street artist Said Dokins clearly loves towers to create his work upon. And he adores covering them with all sorts of cryptic symbols and stylized letter forms. Now we find him doing a decided...