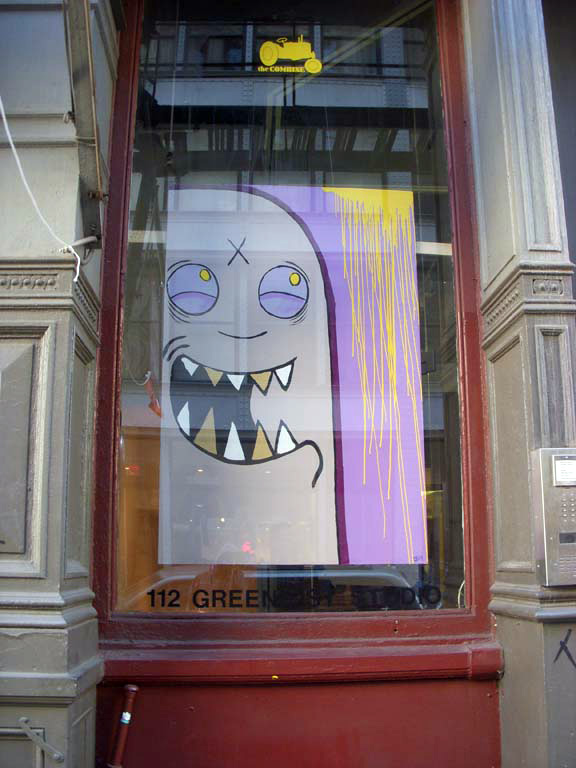 Like Obama says, we’ve got work to do, people.

Royce Bannon and a diverse team of talented street artist/graff writers are taking the challenge seriously: Revive the artists’ space in Soho that boasts a proud history and restore it to the constructive, collaborative, democratic roots of a real artists’ community; one that will have a mission of giving back, as well as re-establishing a laboratory for discovery.

These are times for bold actions of hope, and all hands are on deck for a show opening this month called “Work to Do” at 112 Greene Street in Soho, a place that first flourished in the years before the Reagan Revolution.

Long before Soho became a jewel encrusted haven for high-end couture, over-priced “foodie” groceries, hi-jacking delis, and exclusive password private clubs, the wild-eyed artists were the only people interested in the abandoned buildings south of Houston, and north of Canal. In the decade of the 1970’s, during a financial crisis when a Republican president told our bankrupt city to “drop dead”, that he would veto any bailout for a cash-strapped NYC economy, Soho was a largely abandoned carcass of warehouses and lifeless factories. As is so often the case, it was the perfect playground for the innovative talents of artists and art students needing cheap raw space to create and coalesce and eventually re-start the engine of cultural growth. Like the Williamsburg/Greenpoint/Bushwick neighborhoods in Brooklyn today, Soho in Manhattan was a pounding heart in a hurting city that was drained by an energy crisis, sapped by a costly possibly illegal war on foreign soil, and duped by the ponzi-schemes of corporate titan opportunists at home.

112 Greene Street in Soho was the original home of 112 Workshop, a raw space open between 1970 and 1980, offering exhibition space for installation and performance for the new generation of conceptual artists who emerged from the radicalized minds and cultural upheavals of the previous decade.

A spirit of collaboration and lively exploration returns to this space on March 26 when street artists well known in North Brooklyn today clear out the moribund basement space at 112 Greene and electrify the walls with a new era of youthful big ideas – and with thanks to those who came before in this hallowed space.

Royce Bannon, core member of the collective ELC (Endless Love Crew), is curating an audacious and boundless graphic cavalcade of street art styles to christen the historic space that honors the creative spirit. While ELC has a rotating roster that sometimes totals as many as 9 artists with a variety of styles, the currently active members of the ELC for this project will be Abe Lincoln Jr., Anera, El Celso, infinity, and Royce Bannon. With everyone working collaboratively, the “Work to Do” show pays homage to the new president and embraces a new reality that artists and creatives in the city are feeling right now.

The 112 Greene Street space is christened The Combine with this inaugural show. Steve Loeb and John Robie are creating The Combine to provide a new environment for the exhibition of art; an alternative to the traditional gallery opening and exhibition, transforming static work into multi-media, performance oriented events.

Detail from Kosbe at “Work to Do” (photo Steven P. Harrington)

On a recent sunny Saturday, with Soho sidewalks anxiously trampled with tourists dragging shopping bags out of Prada, Dean & Deluca, and the Apple store, Royce and Chris from Robots Will Kill are laboring below street level on work for the new show. Descending the stairway you hear the blasting remixed hip-hop jams, see the spray-painted names along the walls claiming space for pieces; Ad Deville of Skewville and U.L.M. have staked their real estate, as has Cake and the Smart Crew. Others have already created pieces on their wall allotment; a 7 foot tall Mochni from Veng on the landing, a chaotic collage from Kosbe as you hit the floor, a manic back wall collaboration with Deekers, infinity, and Celso.

A complete history of 112 Workshop

Royce sits at his makeshift table of plywood and saw-horses, pouring over a large book about 112 Workshop, marking its’ pages with post-its, and eyeballing every available inch of the entire basement space, thinking about how to fill it, and with whom. His phone keeps ringing, but he’s concentrating on the long rectangular room. He’s loving this moment, and proud of the work his friends have put into the space. Chris from RWK climbs a ladder to lay-in the first wash of color that will build the backing of… perhaps a robot?

Did you hear the new one about Octomom? (Royce Bannon, Dain, and AVOID Pi) (photo Steven P. Harrington)

The mottled concrete floor is marked with blue tape where a stage will be built for Afrika Bambaataa and Soulsonic Force on opening night, and the backdrop wall is already claimed by an undulating AVOID Pi tentacle, some Dain wheatpasted portraits that well up with fluorescent tears, and some smart-aleck monsters from Mr. Bannon himself, and a space remains for Abe Lincoln Jr.. Walk past a stack of plywood into a makeshift rectangular “gallery” room where many 3’ x 8’ foamcore canvasses lean – soon to showcase Deekers, infinity, Celso, and Royce pieces and hung in the windows of a music store further north of here.

Brooklyn Street Art: So who decided to put on this show?
Royce Bannon: Steven Loeb (composer, arranger, producer) and John Robie (composer, musician and record producer). They both have really extensive resumes in the music industry that go back to the 70’s – have worked with so many great musicians and artists that have impacted most of us – Kurtis Blow, Public Enemy, James Brown, LL Cool J… and a lot more. This is their space, and they’ve given me full control to make this show rock.

This is how we do it (Chris from Robots Will Kill) (photo Steven P. Harrington)

Brooklyn Street Art: How did you get involved?
Royce Bannon: They hit me up on MySpace about a year ago, I guess. They knew about ELC and liked our work. About November or December they asked me if we could throw an ELC show and I was like “Sure!” We got together and had lunch and they showed me the space. It was a mess when I saw it. It was full of a bunch of wood, tables, broken furniture, junk… it was basically used for storage, hadn’t been used for anything I guess for years.

Brooklyn Street Art: Are they planning to use the space after the show?
Royce Bannon: Yeah, they are turning it into an event center, mainly for charitable events. They want to make money, but they want to give back as well. This will be the first kind of event that is following that approach.

Brooklyn Street Art: So they first contacted you to do an ELC show, but you actually know a lot more people who can do work in a space like this.
Royce Bannon: Yeah exactly, they were like “we like ELC” and I said, “This is a lot of room to fill for just ELC, so why not invite people who I admire, and some of their friends and we can just crush this whole place up?”

Brooklyn Street Art: Have you had to tell people “no” since this roster started filling up?
Royce Bannon: Yes, (laughs) I’ve been telling people “no” a lot, and that’s really hard. What I’ve been telling them is to hold on, and once everybody paints, there will be other smaller or tight spots where they can do “fill-ins’, cause some people like those smaller spots too.

Brooklyn Street Art: Looking at this giant space, you are giving people a lot of real estate; these spaces look like 8’ by 8’ chunks of wall. That’s pretty generous.
Royce Bannon: Yeah definitely, why not? The spaces are claimed, and we’ve got lots more space to do, and about a third of it is done already.

Brooklyn Street Art: Are people excited to be in the show?
Royce Bannon: Yeah, very excited, I think it’s gonna be like a madhouse in here. It’s about 4,000 square feet floorspace.

Brooklyn Street Art: You have been working long hours to accommodate all these artists?
Royce Bannon: Yeah, since mid-January I’ve been here like 12 hour days, sometimes late at night. First we had to clean up the space, figure out what materials we wanted to keep. We’re using everything they had left here and re-purposing it, cause “why not”. Better than throwing it away. Like my monsters are cut out of some bookshelves (laughs). They’ve been supplying us with whatever tools we need, gave us a bunch of paint. So with extras, like ladders and tools, I just go to them and we can get to work. They are really supportive of us, plus they’re collectors.

In planning for the new show, Royce and all of the artists have been inspired by the words of the 44th president:

“In reaffirming the greatness of our nation, we understand that greatness is never a given. It must be earned. What is required of us now is a new era of responsibility – a recognition, on the part of every American, that we have duties to ourselves, our nation, and the world, duties that we do not grudgingly accept but rather seize gladly, firm in the knowledge that there is nothing so satisfying to the spirit, so defining of our character, than giving our all to a difficult task. It has been the risk-takers, the doers, the makers of things – some celebrated but more often men and women obscure in their labor, who have carried us up.“