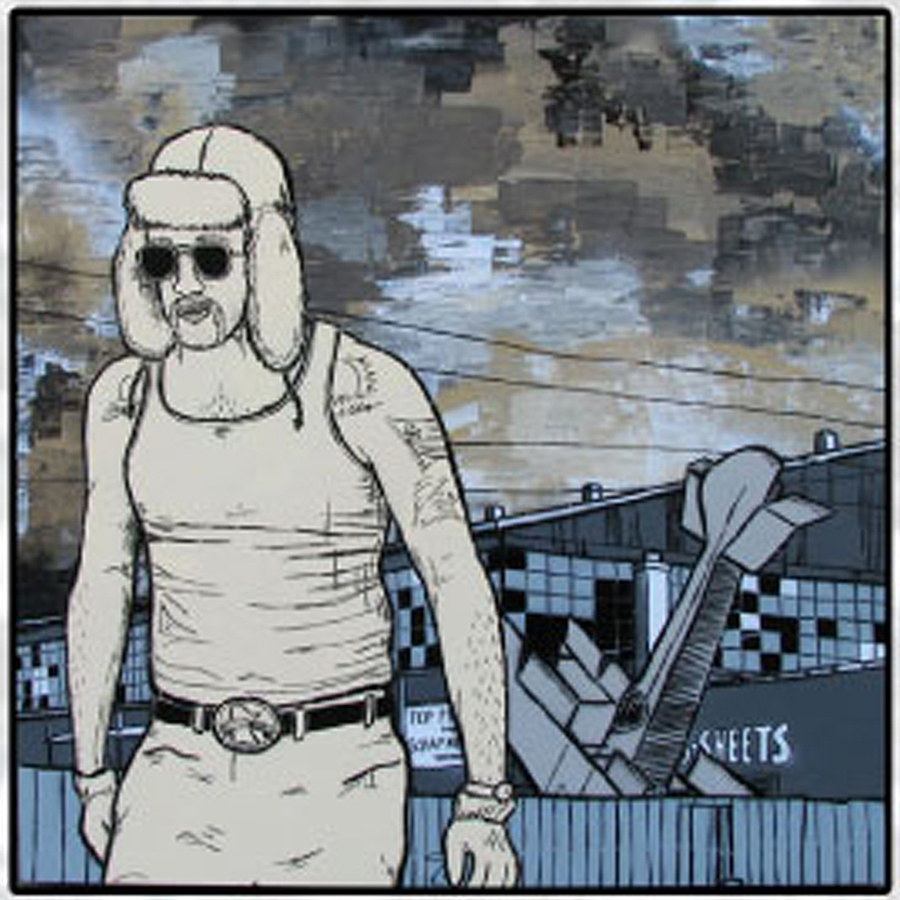 Once you’re in the thick of it,

summer in Brooklyn is about getting out of your hot apartment and sitting on the stoop with yer homies, watching the short-shorts and long legs walking by. You may hit the Siren Festival in Coney Island for the loud music and cold beer (and the Cyclone if you dare). And probably some BBQ’s on the roof, and frisbee in the park…..

And of course you’ll want to mount some gigantic eye-popping murals of mountain goats, owls, and bone-piles on walls for seven consecutive days. Well, at least if your name is Broken Crow, you will.

The Minneapolis artist John Grider, together with new Broken Crow partner Paint Goggles and their buddy Over Under, got up on some very large spaces in a roller-coaster rapid week that just ended in multi-storied murals in Bushwick. Arriving in a truck full of paint, plaster and scaffolding, Brooklyn is the latest city Broken Crow has sanctified with his angel-winged stenciled boy and an ark’s worth of animals trotting along side. Check him out in Paris with Vexta, in Waterloo Tunnel in London at the Cans Festival, and of course in stencil Mecca – Melbourne.

Like always, the Broken Crow returns to Minneapolis, and that’s where he reflects on the maiden voyage to Brooklyn.

BrooklynStreetArt: For the record, how many murals in how many days?

BrooklynStreetArt: And a couple cans of paint?

John Grider: I think we went through somewhere around 10 gallons of bucket paint, and at least 70 or 80 cans of aerosol…

BrooklynStreetArt: Who’s idea was this?

John Grider: It wasn’t any one person’s idea, really. The whole trip was a bit of a collaboration, even in its planning stages. Two or three months ago I got an email from a man named Darren in Carroll Gardens who was looking to have two walls painted on the outside of his house. Fifteen or twenty emails later, after all the logistics were hammered out with Paint Goggles, we got into our van and drove east.

BrooklynStreetArt: How did you and Paint Goggles start working as a crew?

John Grider: Mike put me in my second art show back in 2004, and we’ve been good friends ever since. We shared a studio for a couple of years, and he’s always been down to help cut stencils and paint them wherever and whenever, he’s been behind the scenes for a good portion of the murals I’ve done, it all evolved really organically.

It helps that he keeps me calm, I’m perpetually calling him up like:

BrooklynStreetArt: What made you pick Bushwick?

John Grider: Bushwick picked us, sort of. Over Under had one of the walls lined up but he hadn’t had time to paint it yet. The first night we were in town, he mentioned that he had a wall that we should paint around the corner from the restaurant we were eating at, and 4 days later we were done with the first two walls and ready to paint the third one. We hadn’t even seen the wall until we rolled up on it with a van full of paint.

BrooklynStreetArt: You use many animals in your work, like the recurring devilish mountain goat Billy. Is there a voice speaking through these animals?

John Grider: I have no idea what all these animals are up to these days. When I’m painting them, it’s like a really long drawn out process of dropping off a stray dog at the pound. You can wish well for them, you can hope that they have a long and healthy life, but there are a lot of unforeseen circumstances that lead to untimely bad things, and you can’t really leave something somewhere without fully accepting that everything has its own life-span and that it’s out of your control.

BrooklynStreetArt: Is it true that you were a forest fire fighter? Did that deepen your connection to animals?

John Grider: Yeah, I did that for about a year and a half, (and) if anything it strengthened a couple of theories that I had. The first was that I wasn’t cut out for anything even remotely close to traditional employment, and that bad management is a universal and all too common reality in virtually every awesome or crappy work environment, everywhere.

The second was that conflict is at the root of virtually every interesting story ever told, or every story that has been told more than once. Fire versus water, good versus evil, city versus countryside, man versus nature, nature versus man, all of these things are universal concepts, all of these ideas have made their way into what I do in some way or another…

BrooklynStreetArt: Other images of rural life appear in your work, spare looking barns and farmhouses, beer-swilling chubby dudes in their man-briefs contemplating piles of skulls. Where do you draw upon for these, and what do they mean to you?

John Grider: They’re all really bad jokes, mostly. Or a visual play on words. Sometimes I’ll have the reference photo figured out before I have the punchline to the joke, sometimes it’s just me trying to figure out why people say things, or do things, or act a certain way. Mostly I’m just trying to keep myself entertained in a world gone boring.

BrooklynStreetArt: Is the scruffy boy with wings somewhat autobiographical?

John Grider: Only in that he can see the future sometimes.

BrooklynStreetArt: You did graffiti a few years back – how does the work you’re doing today differ?

John Grider: Nowadays, when my mom asks me where I’ve been painting, she doesn’t really seem all that mad about it.

BrooklynStreetArt: Your murals take a lot of planning to execute – How important is composition?

John Grider: Composition is really really really important. There are paintings that I have no idea why I like them, other than that they’re well composed. It’s absolutely imperative that you maintain your composure under any and all circumstances.

BrooklynStreetArt: Can you tell if a wall is going to be difficult to work on?

John Grider: Almost everything can be worked around, or worked into the composition, or dealt with as needed. Every wall has sh**ty aspects, and great aspects. It’s the people that make any experience great, and when I look back at painting a wall, it’s the people that I remember, but not the wall itself.

I’m actually relieved most of the time when these spirits make their presence known, they’re good omens.

BrooklynStreetArt: These projects demand a huge amount of art supplies, person-hours, and resources. Is it a challenge to manage them?

John Grider: Yes and no. It’s gotten to a point where there’s almost a standard checklist, like what colors do we need, do we have enough black, do we have extra duct tape, a place to sleep, gas money? All of that stuff has almost become second nature though. I’d say that there’s at least as much time spent on logistics as there is on actually painting, if not more time planning and less time painting. I’d like to say that I’m spending more time painting, but I’m lazy. Artists are inherently lazy people.

BrooklynStreetArt: Which artists have inspired you?

John Grider: This question is always a total mind-f**k for me. I’d have to say that every artist, ever, has inspired me somehow, be it for better or for worse. Really crappy art is always totally inspiring because it’s just fearless in its sh**tiness. For example, I’m completely dumbfounded that Rothko has entire museums dedicated to him.. if all I had to do was paint big squares, I’d be a thousand times more prolific than I am today… process does not equal content, I think this is a really important concept that people should be talking about at art schools.

BrooklynStreetArt: You’ve been in shows with artists like Vexta, Logan Hicks, C215, Faile…Who is doing stuff that you admire today?

BrooklynStreetArt: Now that you are back in Minneapolis, where to next?

John Grider: I think I’d like to go swimming as much as possible for the duration of the summer, just to make up for the complete and total lack of swimming that seems to be happening out there in Brooklyn. I’ve also got a bunch of projects and commissions that I haven’t had time to get to, that will likely take priority over swimming. There’s also a show at Hot Pop in Milwaukee opening September 12th, and a show at Pure Evil Gallery in London in October with the whole Stencil History X crew. Plus there’s a ton of walls in Minnesota that I haven’t had time to get to yet… to be completely honest, I have no idea what’s going on anymore. It’s all a total blur to me. I’m mostly just really happy that I get to spend a month at home with my 7 month old daughter.

NEXT UP for Broken Crow:

After an eventful truck ride back to Minneapolis, Broken Crow has been putting up murals in Duluth (in his home state) in collaboration with Mike Fitzsimmons, Eric Inkala, Isaac Arvold, and Drew Peterson.

The rest of 2008 and ’09 will bring two shows in Milwaukee and London, a special project with C215, and more fun in Bristol, Berlin, and of course Minneapolis.

John will be touring work around with the Stencil History X folks for the duration of global warming.

Thanks to the talented and beautiful LunaPark

Wall and Piece by Banksy

Headbanger Logan Hicks Brings His Posse to Celebrate a brand New Green Day
With Punk Rock Chords banging in his ears, the "workhorse" slams together two of his favorite things - Rock and Street Art - with a careful eye. He likes the dirt and the grit and diversity of New Y...
NOHJCOLEY "Back Talk" Conversation
To introduce readers to some of the Street Artists in the upcoming show "Street Art Saved My Life: 39 New York Stories", BSA asked a number of the artists to take part in "Back Tal...
"The Great OutDoors" with Luna Park at ArtBreak Gallery
A true street art Opening in Brooklyn, with shutters open wide and many doorways to contemplate. A collection of 30 artists on the street art scene are contributing to the vision of the adoorable L...
Year in Images 2008
Paradigm Shifting and Cave Writings Looking back at the powerful changes in '08, it's not hard to see their reflection on the Brooklyn streets, which may serve as tea leaves revealing the messages sw...
Broken Crow & Over Under Redux
Yes, Broken Crow was in town to participate in two art shows and put up three walls before heading on back to Minneapolis, where they participated in a 24 hour art creating event and painted a gigundo...
Broken Crow Paint Goggles