The brilliant illustrator of fantasy and firey allegory, BLU, championed the cause of the Rog Factory squat in Ljubljana, Slovenia, in 2016 with a centrally framed handgun in pink and red. In that heated moment the community of artists and activists had fended off developers, construction thugs, and even some kind of fascists attacking them or trying to chase them from the property.

“During the last weeks they have resisted a brutal eviction by the municipality and a neo-nazi-shit attack during the night,” BLU said at the time on his personal blog. The website site of the Rog collective claimed people in high places were involved. “We jointly defended our factory against the deceitful night attack of the mayor and his militia,” they say in a statement, “We held the occupation.”

The encroachment of private capital on community spaces often provokes a rallying cry of artists like BLU, a never-ending battle to preserve human-scale projects that are full of idiosyncrasy, warmth, and democratic ideals – they may say. “Autonomous spaces across Slovenia and Europe are being cleared at an alarming rate,” says the Rog site, “and in their place, there are polished facades that hide a lack of imagination.”

The settlement at the former bicycle factory had been around for a decade and provided refuge and community to many, and the Italian artist lent his talents as a sign of forceful solidarity, with a gun comprised by, “such weapons as skateboards, tools, instruments, pens, brushes, bicycle tires,” said Arrested Motion when the piece first went up.

As with all graffiti/street art/murals, we accept the fact that part of their definition implies ephemerality – but nevertheless, city dwellers also do become attached to it sometimes. Over time an artists’ work on the street, even if originally done illegally, can implicate itself into our lives, becoming part of our daily experience of a city, effectively defining it in some way.

That’s why the loss of this painting is worth noting – and why locals decided to let it go in style with a festive paint party. When gentrifiers floated the idea of preserving the work, BLU resisted vehemently, says photographer/ethnographer Martha Cooper, who documented the wall this summer. She tells us of a more jovial way concocted to bid “adijo” to BLU.

“So with Blu’s blessing,” she says, “some artists organized an effort to fire homemade bazooka paint guns to cover the mural. They had 7 guns and several hundred bullets filled with different colors of paint all greased up and ready to fire.” A splattered goodbye that again echoed the militancy that some feel about defending their squatter rights.

The plan was abandoned finally however due to a strong presence of security – and possibly because using guns, however playfully, could be misinterpreted and end badly, but we are surmising. After all, BLU’s “gun” was full of creative ways to dismantle the patriarchy, including an ode to Woody Guthrie’s guitar, and later on Pete Seeger’s banjo; an admonition to use art powerfully in a battle for people.

“I have photos of the gun mural which is composed of peaceful ‘weapons,’” Martha tells us. “There is an inscription on the guitar which says, ‘This machine kills fascists.’”

As the summer wound down, we heard from Sandi Abram, the Ljubljana Street Art Festival director. “The municipality has begun the demolition of the Rog Factory front facade, which means Blu’s mural will also be demolished probably by the end of the week.”

Luckily for all of us, documentarians like Ms. Cooper have preserved it beautifully for posterity. 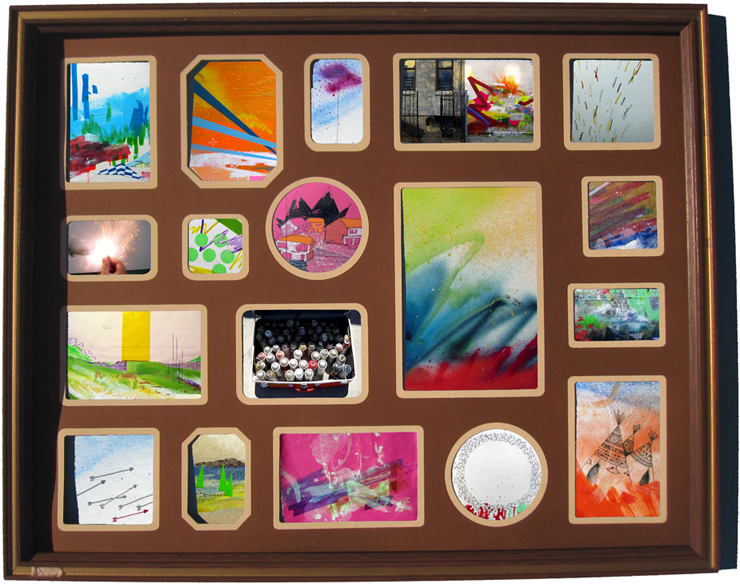 Burke and Muraghu’s collaborations are vivid representation of the American landscape. The show’s title, This Land is My Land, taken from Woody Guthrie’s landmark song, embodies the artists’ intent behind both the work and their own lifestyle. Guthrie describes the disenfranchised American staking a hypothetical claim to the landscape, reiterating native American concepts of land ownership. Their work inspired by the New York City graffiti movement and the Hudson River school not only attempts to document the American experience, but lay claim, even if only for a moment, to enlivening our relationship to the landscape through abstraction.