Abstract geometrist and Street Artist MOMO is still sweeping across a massive brick wall in his cherry picker as he leads Open Walls Baltimore across the finish line with more than twenty artists and murals spread across these blocks straight off “The Wire” TV series. 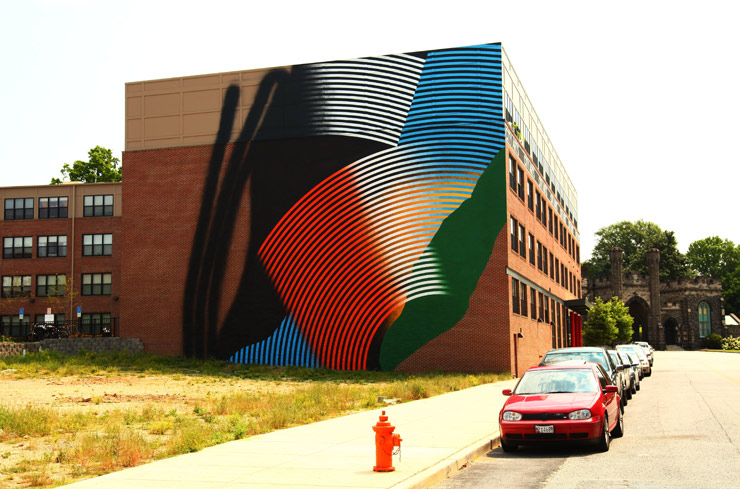 “Oh, man, he’s really getting it down over there,” says local pigeon trainer Tony Divers, who is looking out his back door past the bird’s coop at the new 5-story MOMO piece coming alive in the empty lot next door. Mr. Tony, whose pigeons have also had a starring role in the series, himself became the subject of a massive building-sized portrait by Jetsonorama two blocks up the street. 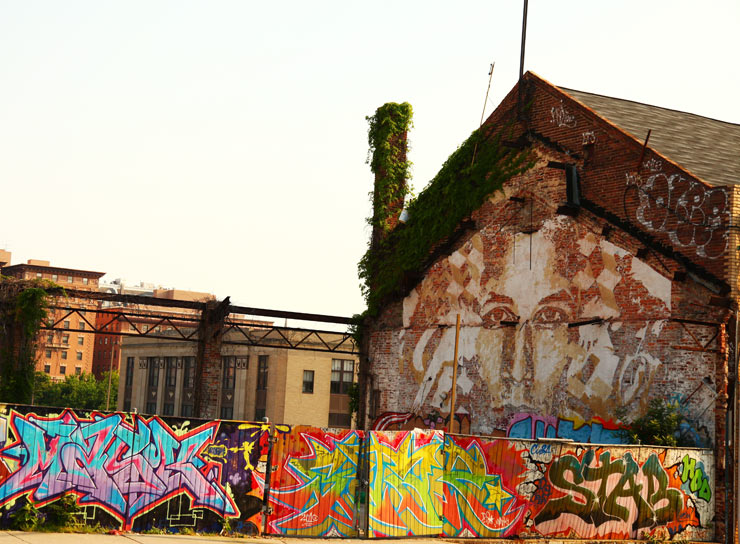 New York Street Artist Gaia had been racing his fixie around this town since he started studying at Maryland Institute College of Art (MICA) a few years ago. In between trips back home he began hitting walls with his large scale paste-ups on sides of some of the abandoned buildings that comprise entire blocks in this city. Somewhere along the way he gradually fell in love with the neighborhood and it’s lively conversations on the stoop, secret speakeasies on the weekend, and eclectic shows with Dan Deacon and the Wham City Arts Collective.

Freshly graduated, the talkative 23 year old artist with a natural knack for organizing decided to stay in B’more and plot a Street Art revitalization of sorts. With Ben Stone and Rebecca Chan of Station North Arts & Entertainment as partners, the trio secured monetary backing and city support for 20 artists to come and paint murals this spring.  When asked if the grand outlay of almost a hundred thousand dollars is a civic/private program, Gaia is quick to answer, “Totally private. I guess you could call it civic because they’re non-profit.” 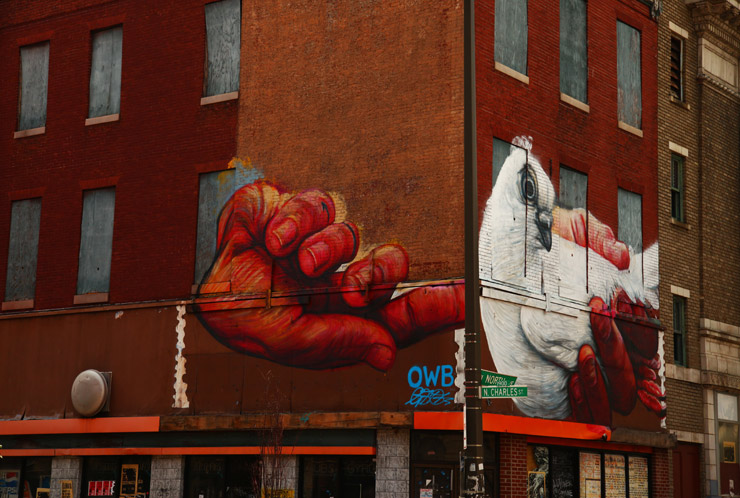 Armed with a budget and Gaia’s knowledge of Street Artists on the scene, the team was able to garner a wide collection of artists to create murals. When Baltimore native and famous graffiti/hip-hop photographer Martha Cooper agreed to shoot it all, Gaia knew OWB was going to be a hit. Large walls were pretty easily secured with help from the City of Baltimore and sponsors helped with paint and services. From March to May the neighborhoods of Station North and Greenmount West have played host to internationally known Street Art names of the moment like Vhils, Sten and Lex, Swoon, Jaz, MOMO, and Interesni Kazki getting up on walls alongside a list of local and regional talents. 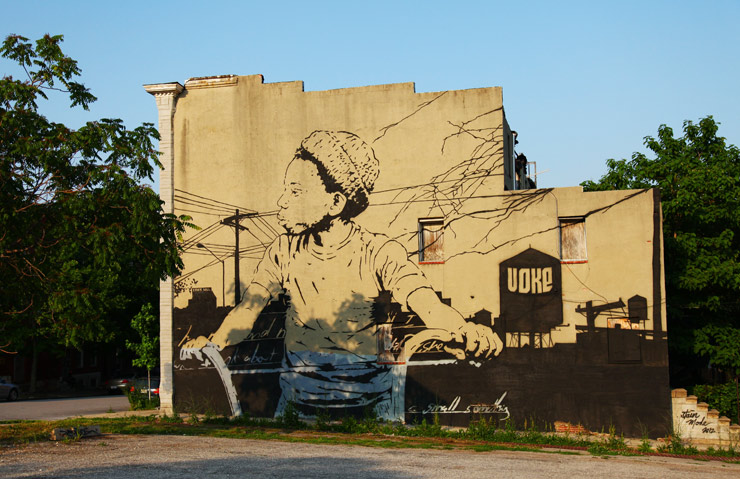 The reviews and interactions between the organizers, artists and local residents have generally been positive in this part of town where the drug trade has filled the vacuum since all the factories died and communities were destroyed. With “art as a gentrifying force” being a huge discussion, these hippy kids have formed community in bombed out factory buildings here over the last decade and a burgeoning artists community has somehow sustained itself tenuously through the rigors of a ruthless recession. Programmatically OWB is not entirely new as a cultural stimulus but this sort of “jump-start” approach to engendering a creative renaissance by public/private development may be watched carefully by other cities as a possible formula to imitate. 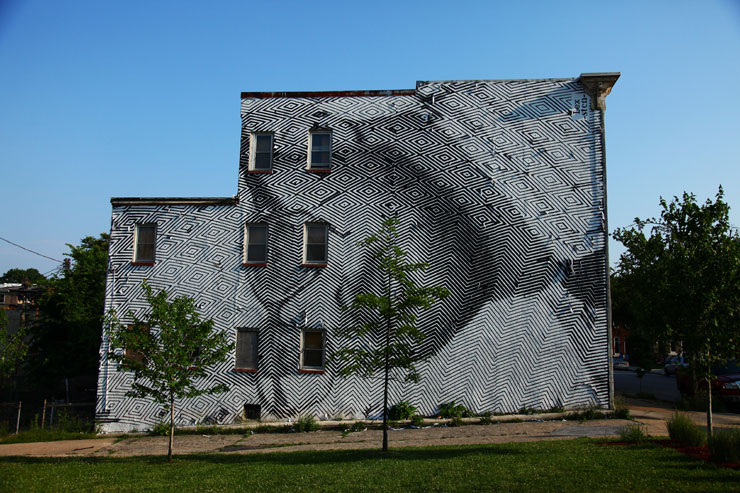 For the upbeat organizer/curator of the project, it’s been extremely gratifying and an eye opener to be accountable to such a range of interests, “I learned that murals can be a little threatening to people and bring out their latent fears and that the parties you think who are going to be most afraid generally might not be,” Gaia explains, “and the ones you think might be the most into it – provide the most criticism.”

“For example the artists community turned out to be the one that was most afraid of being a gentrifying force and was most critical of the project. And all the legacy residents were generally not bringing that up, even if I asked them,” he says. 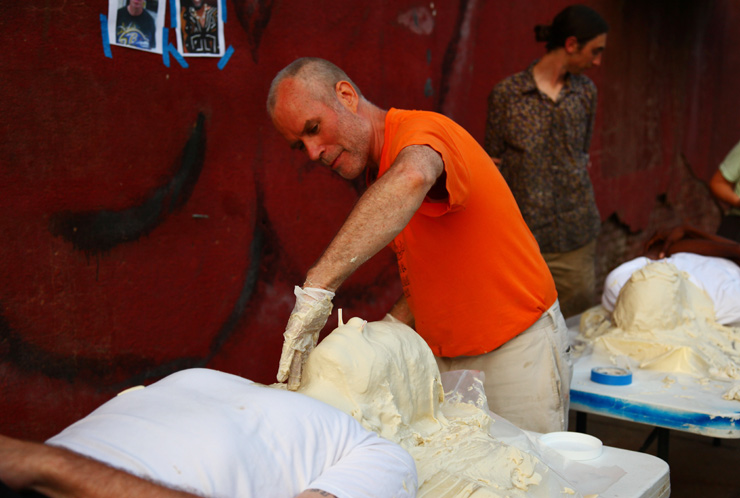 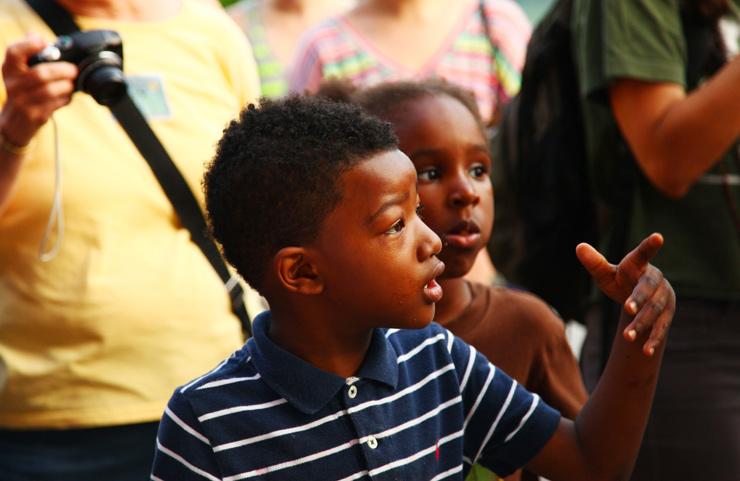 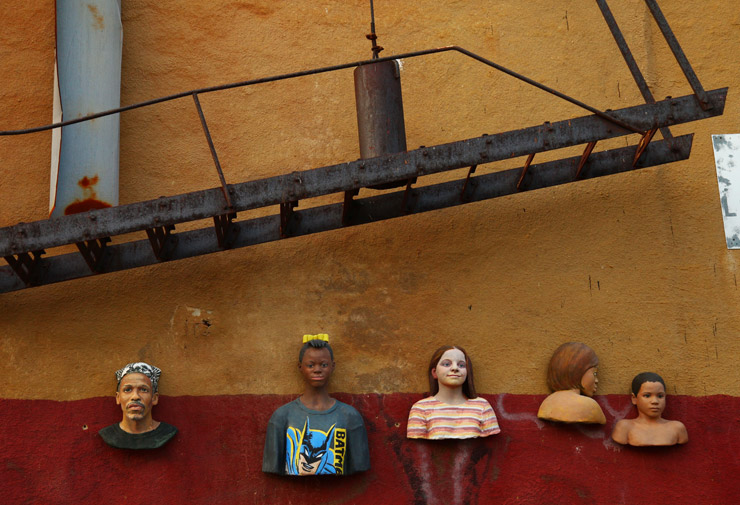 Street Artist Nanook, also a student at nearby MICA and a logistical lynchpin for OWB, created his own mural that strikes at the historic manufacturing base that once provided a livelihood for the people who lived in many of these abandoned buildings. For him, the artist’s role is to connect the lines between past and present, “And so it’s just about bringing back these signifiers to the neighborhood. Especially for this housing area that was built to house the people who were working at these factories. It has been interesting to meet the people who are old enough to have worked at these factories – they actually worked at the coat factory and the rudder factory and the bottling factory down the street.”

As he smokes and points to the gears and the large hand on his mural, Nanook also talks about the former coat factory two blocks away that is now being renovated to be a magnet art school, and the possibility that work by creatives can create help neighborhoods re-imagine a future, “I think most artists are intermediaries for the communities they reside in.” 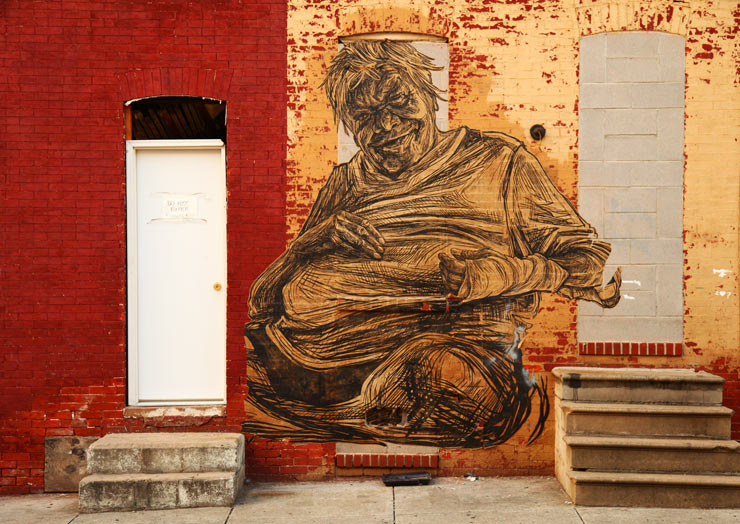 As we tour around the streets with Ms. Cooper, we make sure to hit the hot graffiti spot in town, an alley she’s known for more than 50 years and one that has provided uninterrupted opportunity for exploration with an aerosol can for many artists who start out here. “Usually there are people painting back here and there’s often somebody doing a fashion shoot back here,” she remarks while snapping images of tags and colorful pieces. “There was a “Wild Style” reunion here a few years ago with Charlie (Ahearn), and they painted all kinds of stuff. It’s fun and they all come to this – because there really aren’t too many locations to do this”

While we watch a handful of 20-year-olds pulling cans from backpacks and arranging them on the cracked concrete in front of a wall, we talk to Jeremy, a local Baltimore artist who also makes puppetry and masks. He says he likes the effect that OWB has been having on the neighborhood. “It’s an interesting project. It’s nice to see a kind of subtle but effective change. Baltimore is kind of rough. But because (OWB) is there it invokes something different and the space actually is transformed.”

On a Friday evening at a block party celebrating the completion of the final wall, Gaia is happy with how it has turned out, and pleased with the multiple conversations he’s been able to have with people in the community about murals, walls, pigeons, paint, and wheat-paste. “My only curatorial process was matching the artists with walls and sites that I thought would be pertinent and I thought would really work with the artists’ process – that was my biggest goal and it succeeded.” 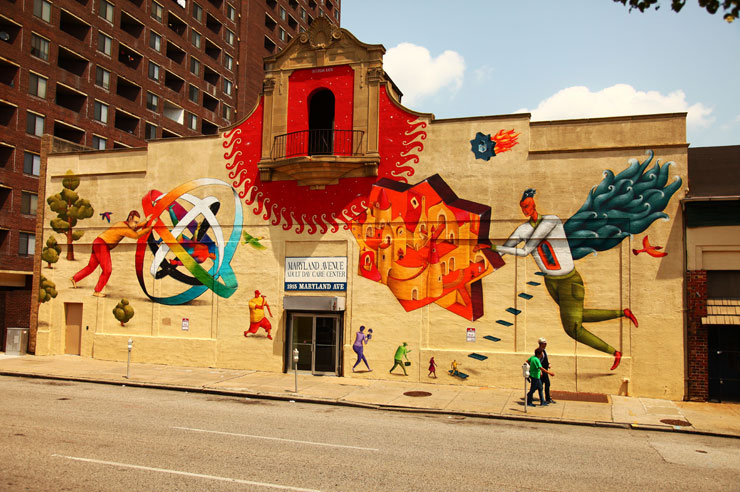 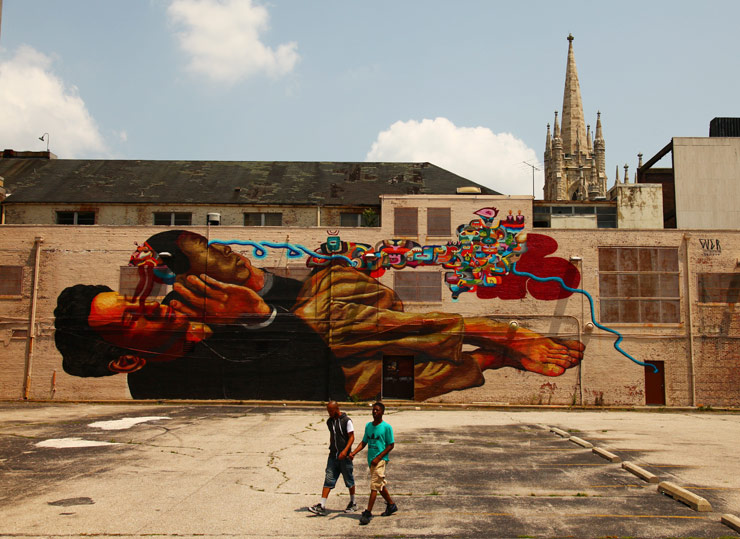 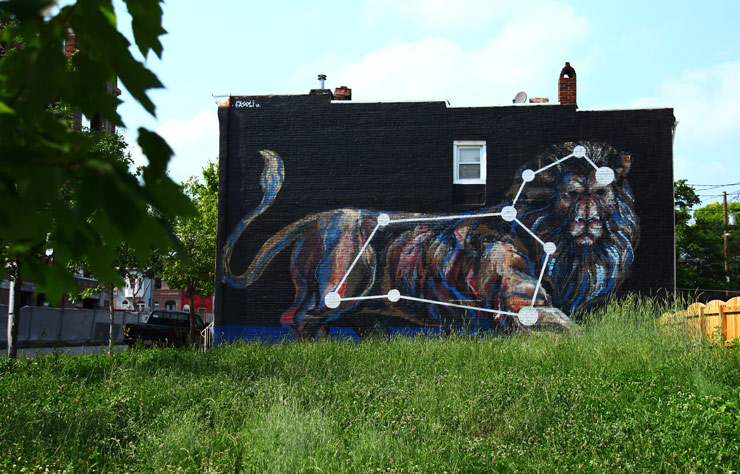 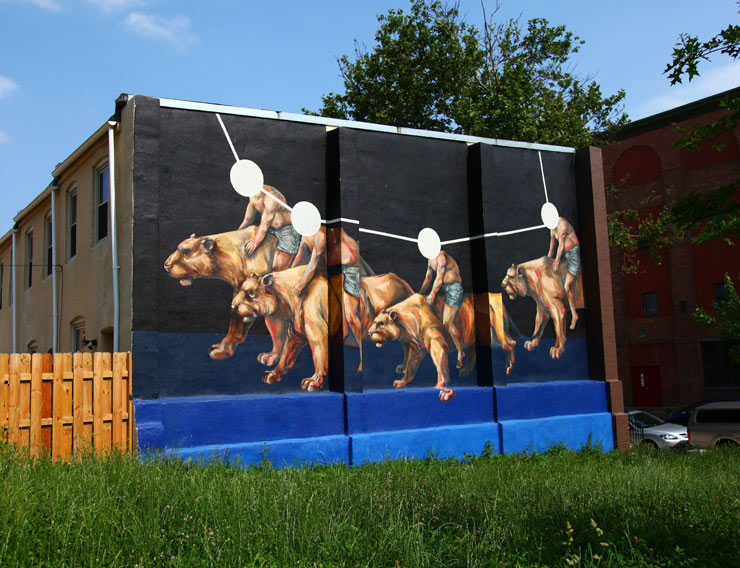 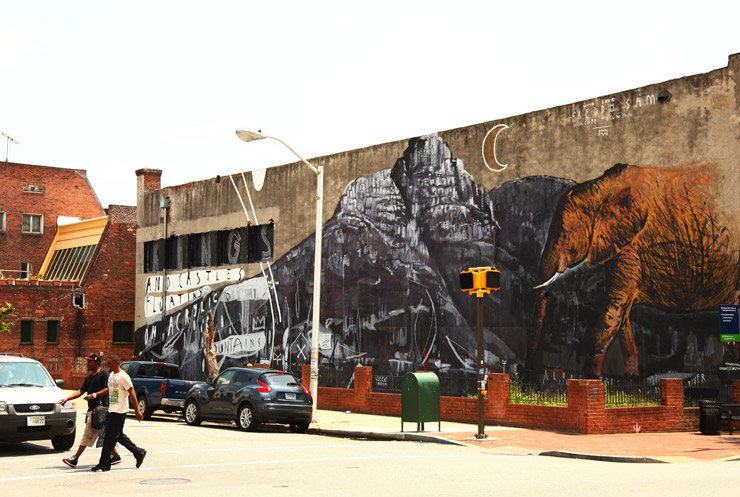 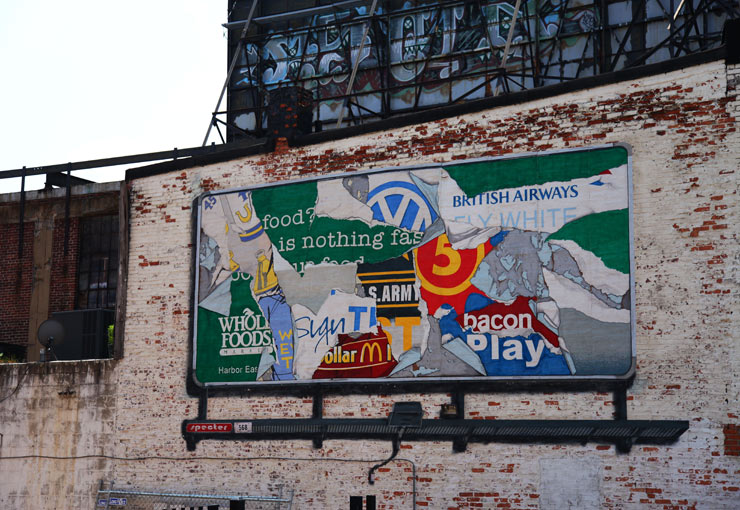 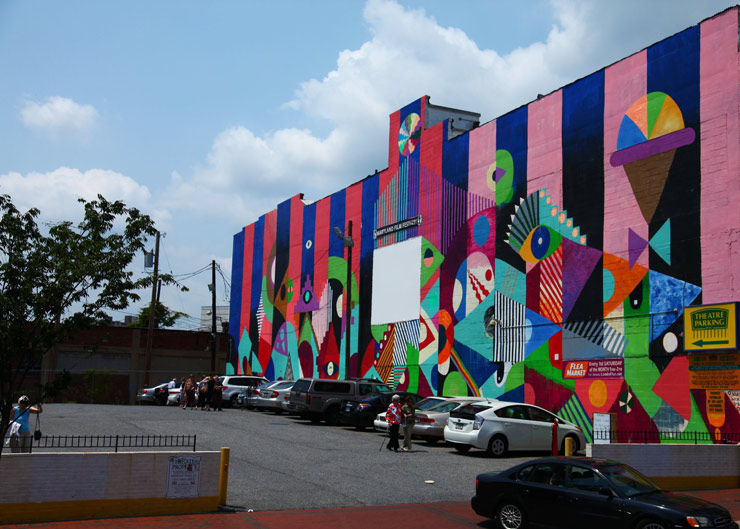 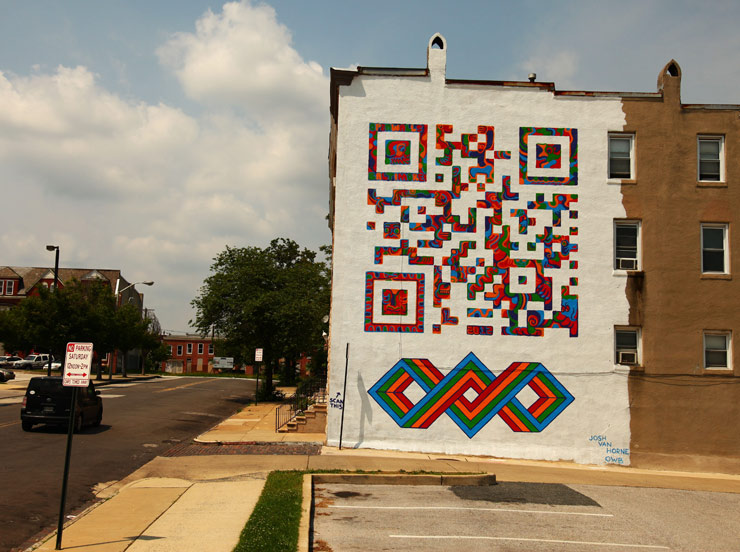 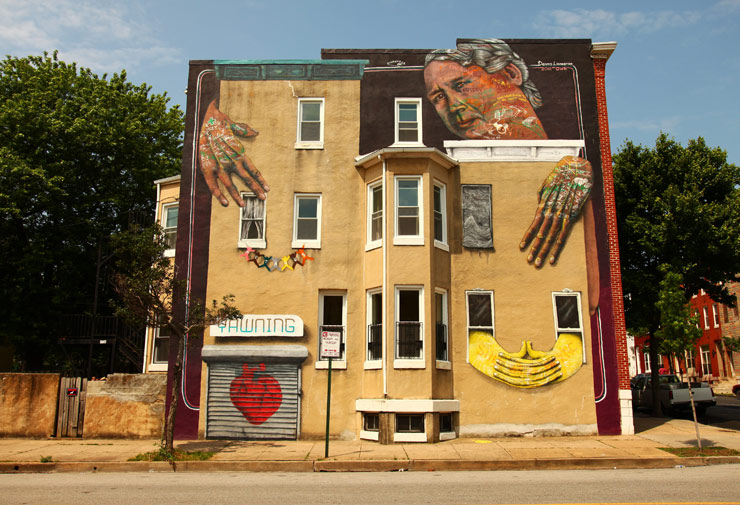 Overunder created a new facade within the facade of this building and a tribute to a local resident, Dennis Livingston. Says Gaia, “OverUnder is remarkably improvisational and really works well with children and people and is super engaging.” Open Walls Baltimore 2012. (photo © Jaime Rojo) 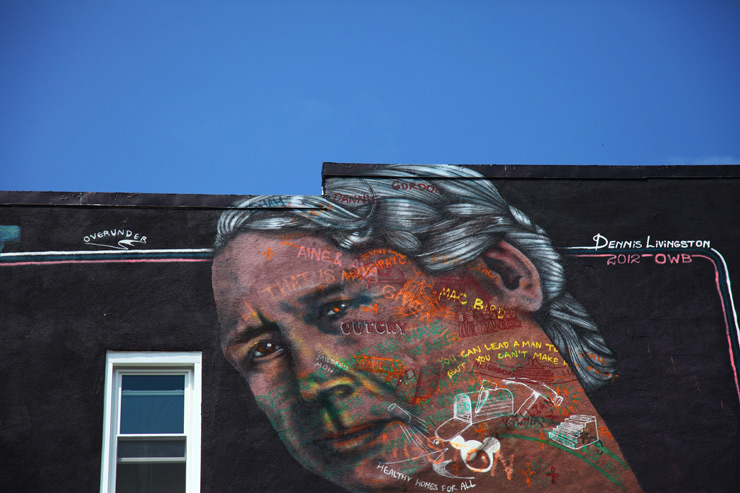 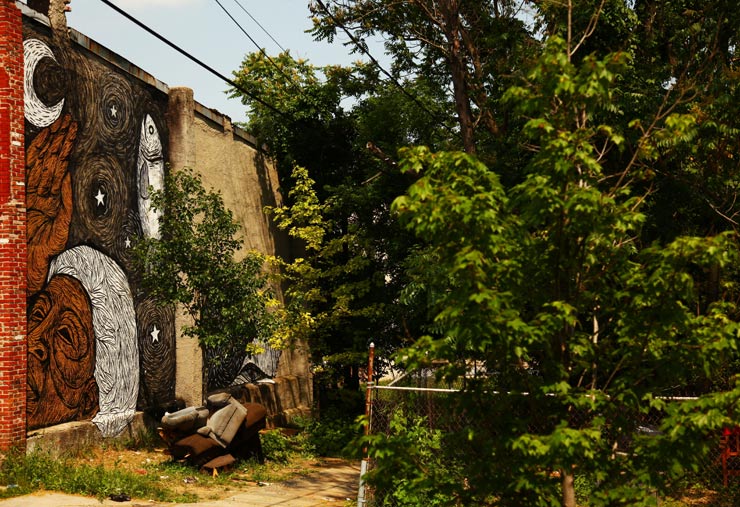 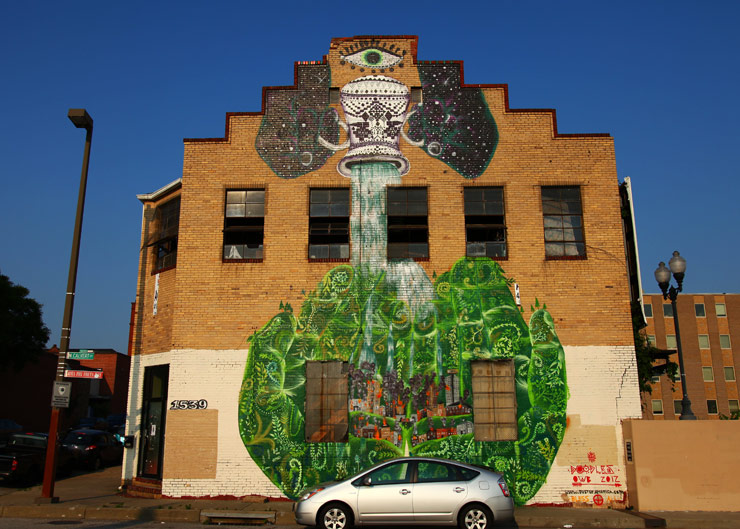 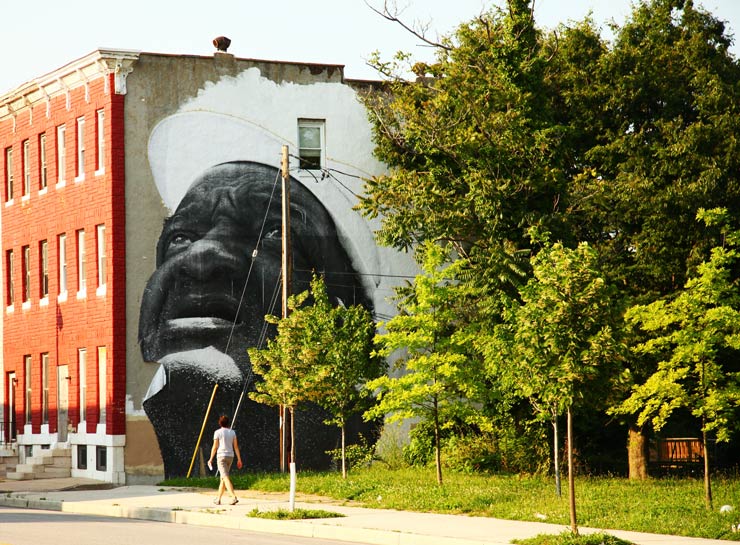 Jetsonorama’s portrait of Mr. Tony as he watches his pigeons in the sky. Open Walls Baltimore 2012. (photo © Jaime Rojo) 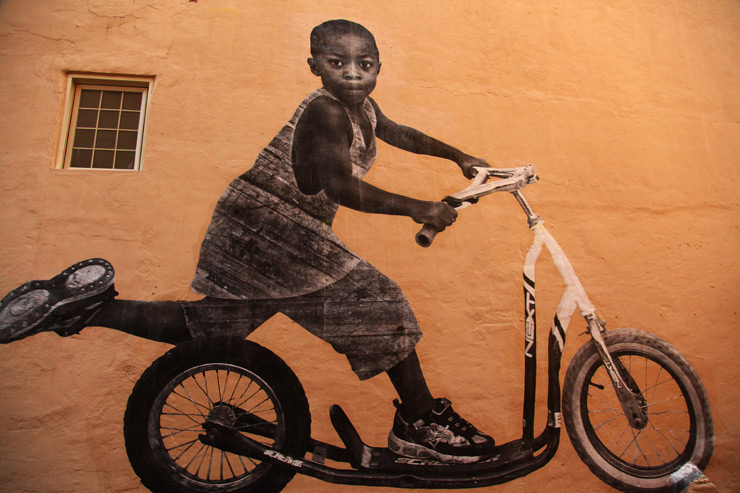 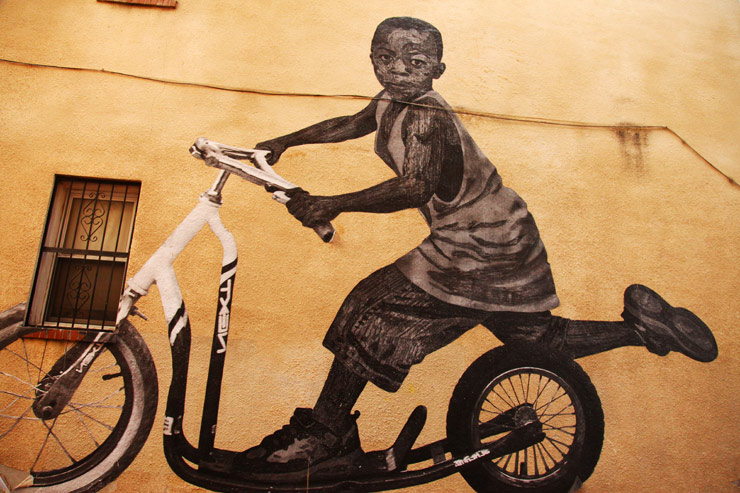 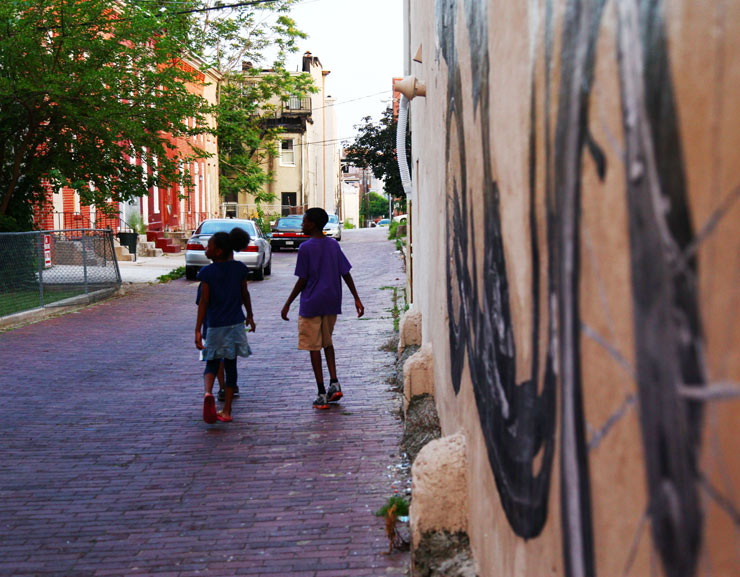 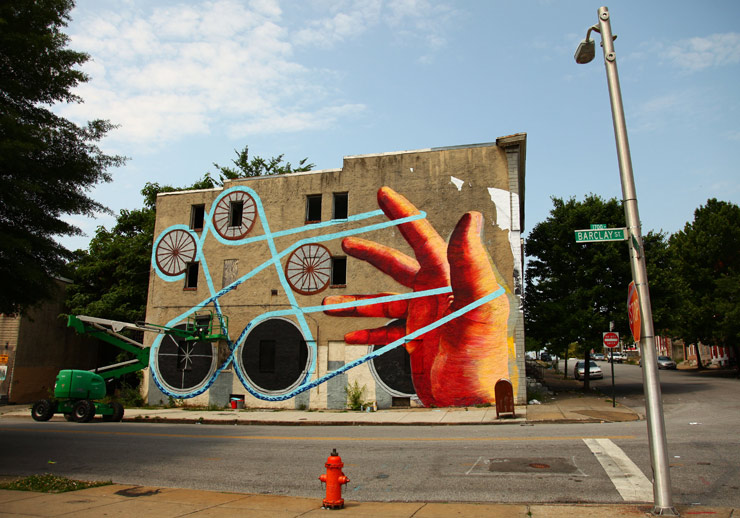