The Photographer Continues to Explore Storytelling With Video

Leading up to the Paul Insect exhibit over at Venice’s Post No Bills gallery, photographer Carlos Gonzalez continued to challenge his visual skills by creating a video to impart a visual narrative, a psychological grounding to the physical process of the artist preparing for the show. The discovery of what it takes to create the show and the prints that were to sold inspired Carlos to tell the story in a new way, using video more than he has before.

Careful observation of movement, pattern, subtleties of technique – all underlaid with a sophistication in audio selections – reveals a talent in the storyteller that keeps unfolding before our eyes even as he endeavors to tell us about Paul Insect the artist and the Ramon De Larosa, the print master. As De Larosa mans the 2oo year old machine to create pieces for the U.K. based artist, bobbing and rolling and pulling and pressing play out as dance over a bed of electronic music and mechanical beats,  succinctly merging two centuries into one.

And in this newest video the screen printing process is explained in 80 seconds to the quick cuts and fluttering drum meter of a motor city inflected rockabilly beat as De Larosa gently applies rich patches of color to a new Insect portrait. It feels like we are all learning at one time – artist, master, videographer, observer.

The Barracuda Wall in Los Angeles is a safe outlet for Street Artists and graffiti artists to try out ideas without worrying that they have to look over their shoulder.  The boxing club inside is owned by Miguel De La Barracuda, thus it’s name and it’s a good spot to get seen, if only for minute before it’s replaced. 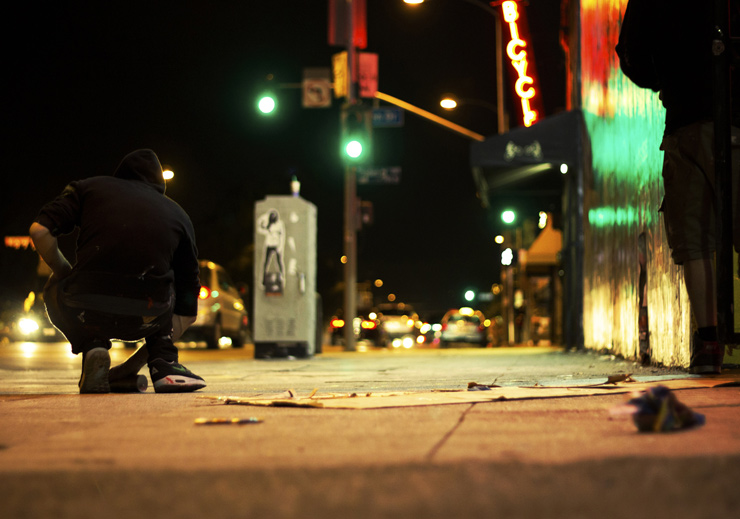 What this fight club gives the lie to is that Street and graff artists are somehow at odds with one another, a mythology propagated by young hot heads sometimes. In fact, this high profile wall in LA shows that most peeps are big enough to allow everybody to get a chance to express the creative spirit, and often they collaborate. A quick bit of Googling will show you a diverse list of work on the Barracuda wall over the last couple of years, including people like Ron English, Gabe and OG. Defer, Prime, Gabe88, Anthony Lister, Escif, Sanir, Gregory Siff, Shepard Fairey and AWR MSK, Hush, Chad Muska, Cyrcle, Free Humanity, and David Flores. It’s a never ending reinvention for the never ending traffic on Melrose Avenue, a gift from a business owner to his community and the artists.

Photographer and BSA collaborator Carlos Gonzalez captured some excellent night shots of  Street Artist Paul Insect at work on the wall one night last week. Masking out the portions of the wall for painting with a roll of masking tape, alternating sharp lines with drippy, Insect put up a pair of eyes to keep track of a piece by Risk below. 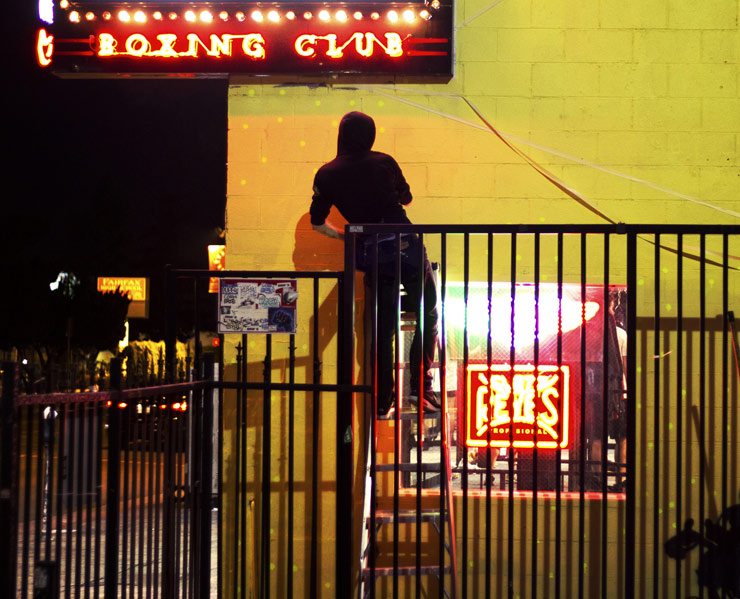 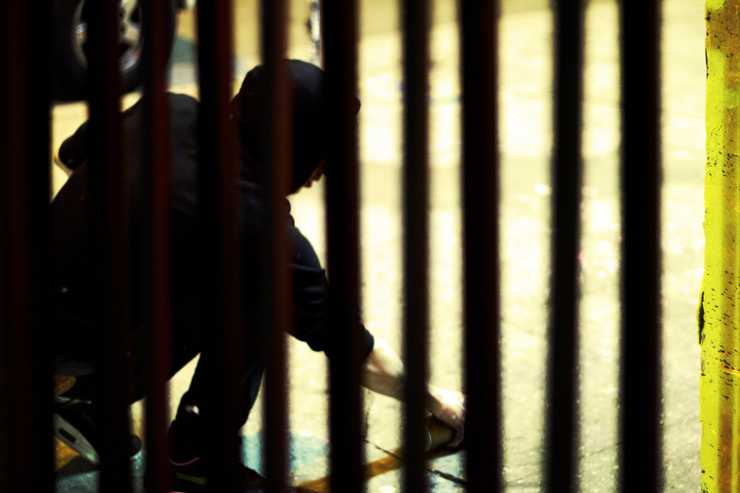 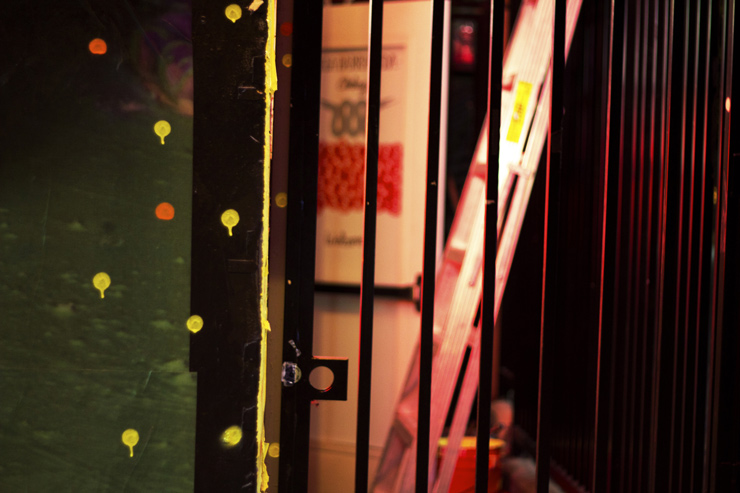 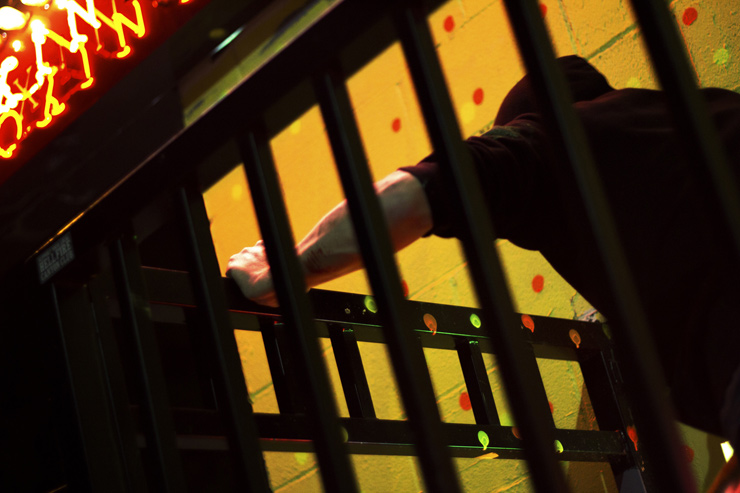 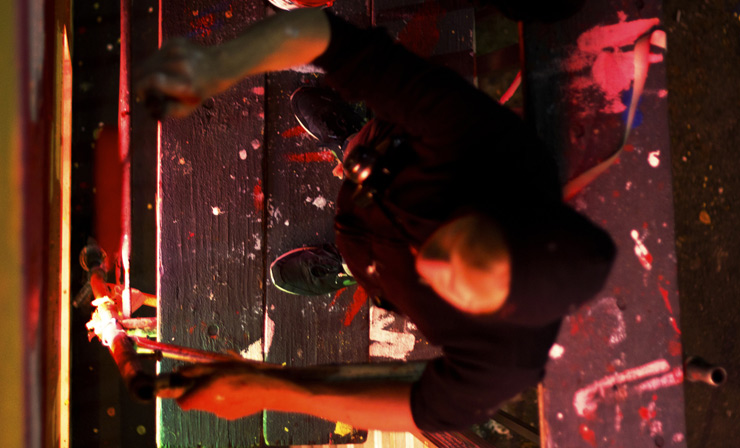 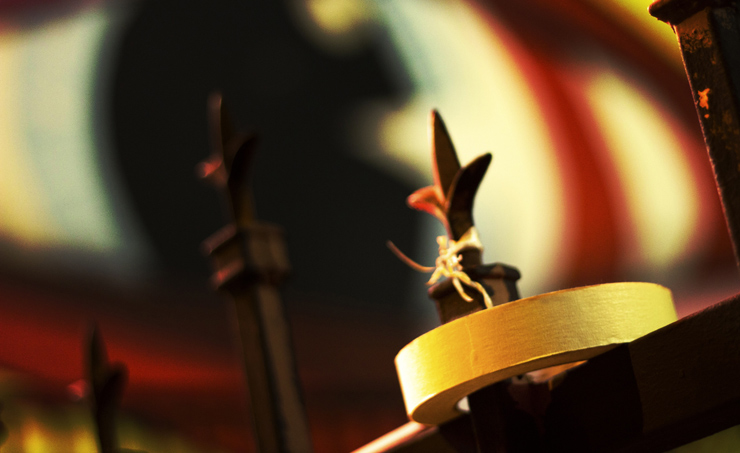 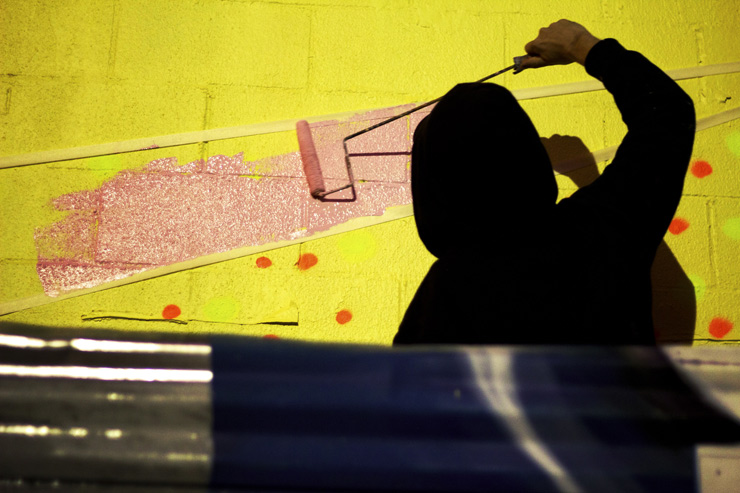 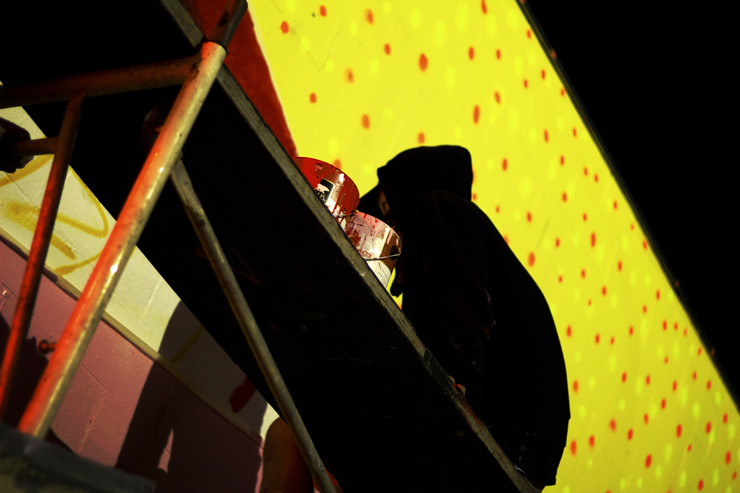 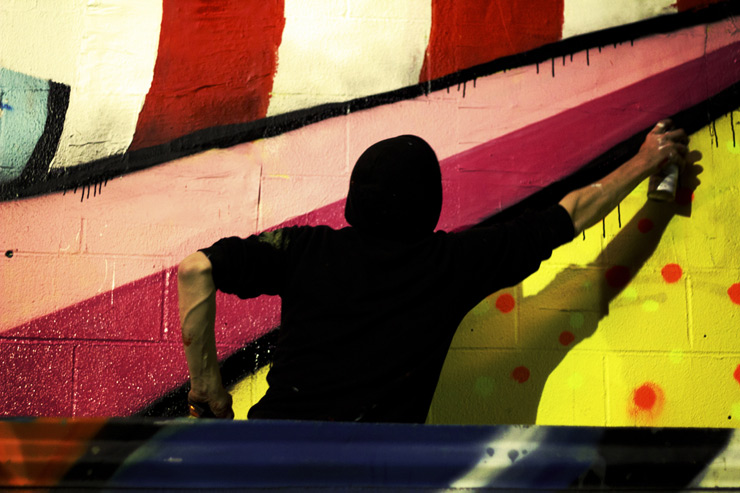 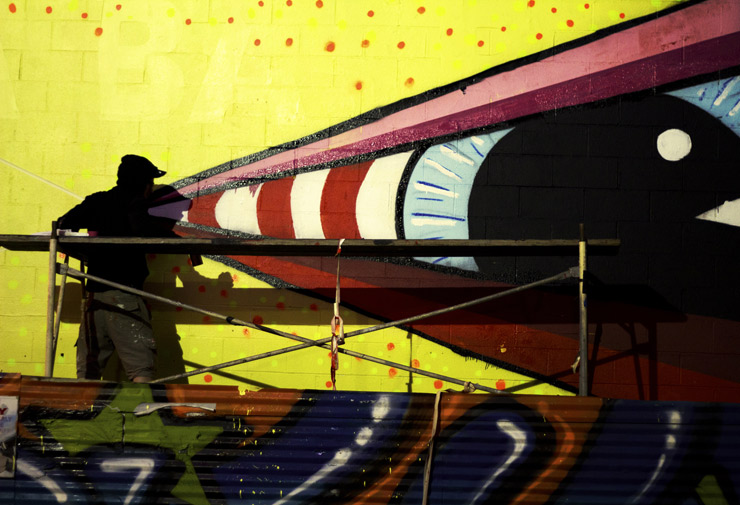 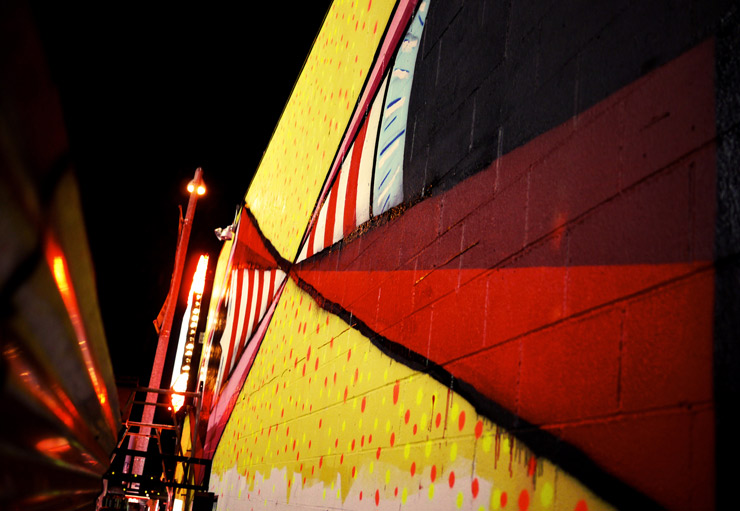 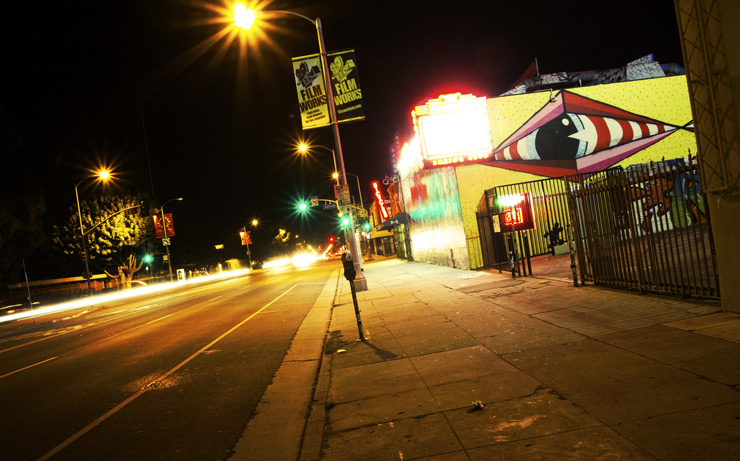 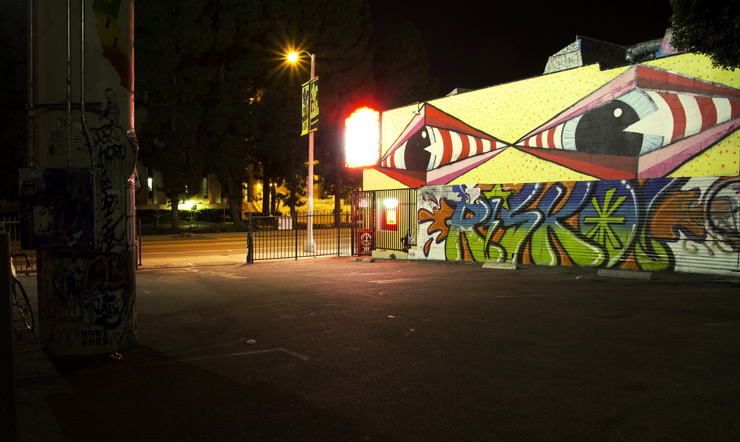 Paul Insect’s solo show “Triptease Revue” opens this Thursday at Post No Bills Gallery . For further information click on the link below: 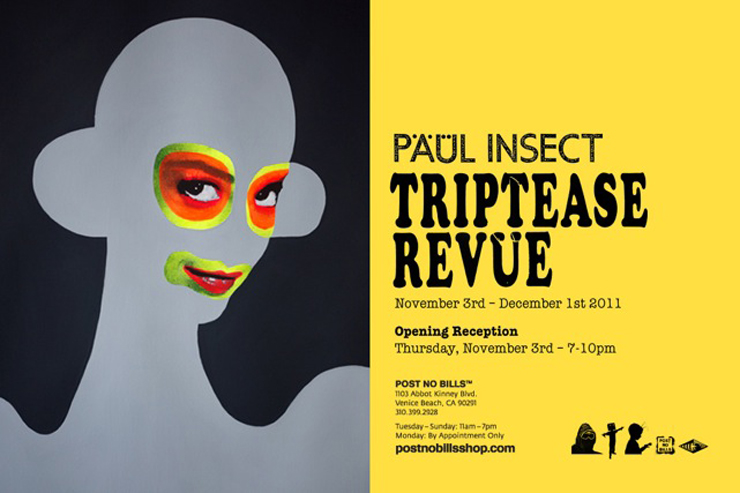 In celebration of the show, the gallery will host

An Opening Reception on Thursday, November 3rd from 7-10 PM

The show will introduce a new body of work featuring masked voyeurs, explicit thematic paintings, plus signature babyheads, and a wide array of other sensory surprises.  TRIPTEASE REVUE represents a new stage in the evolution of Insect’s art.

Paul started the renowned design collective “Insect” in 1995.  He quickly found himself outgrowing the design industry and began placing his work on the streets. 2003 saw his first show “The Hills Have Eyes”, and in 2007, Paul exhibited at the famed Pictures On Walls (POW) Christmas show “Santa’s Ghetto” in Bethlehem, which saw him paint alongside Banksy and other POW artists on the separation wall in Palestine.  Insect also gained notoriety for creating definitive album artwork for San Francisco hip-hop producer DJ Shadow.

“Bullion”, Paul’s first major solo show in 2007 at the Lazarides Gallery, saw him inconspicuously place real gold bars with bite marks on the streets of London. Before the show opened, Damien Hirst reportedly spent £500,000 buying up the entire show. His breakout follow-up show, “Poison” with Lazarides in 2008, took place in an abandoned sex shop in London’s Kings Cross and featured his iconic bronze Playboy Bunny skulls and his beloved babyheads – which have become some of the most recognisable images on the streets today.