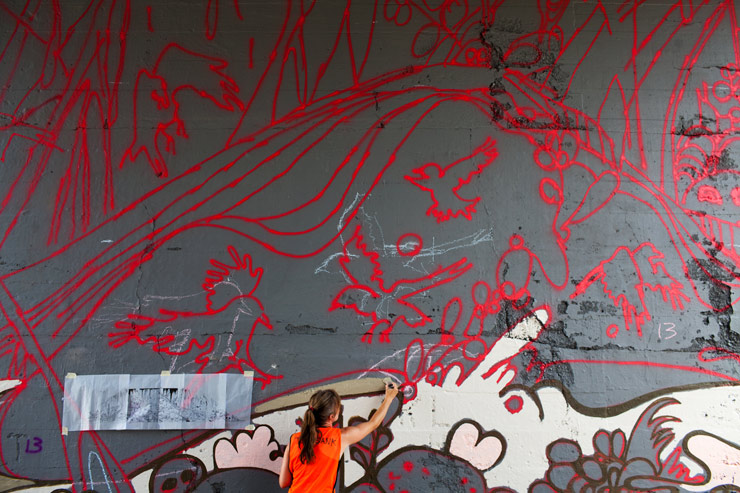 The third installment of the conference for Living Walls, The City Speaks, starting today and running through the 19th, will build on the comaraderie established since then and on the lessons learned by those organizers who dared to mount this huge Street Art event on a shoe string budget and a dream. The number one change this year is that there is a bit of funding. Thanks to diligent fundraising and the donations of generous people like BSA readers who clicked a banner and gave, the Street Artists and other participants this year are actually staying in hotel rooms and everyone has a bed.

“All of the out of town artists are here, Hyuro just got in last night,” excitedly reports Living Walls organizer and BSA contributor Alexandra Parrish. So everybody is rested and ready to go.

The second important change this year is that it is all about the women.

In a completely unheard of and shocking move, the organizers/curators have invited only female Street Artists to participate this time, making this the World’s First All Female Paint Fest!  It’s a remarkable achievement in a scene that has been dominated by the male of the species, almost by definition, since the graffiti scene began in US cities about a half century ago. In most people’s opinion, it’s about time too. Speculation abounds about how the atmosphere and the output will be affected. For one thing, there will probably be fewer toilet seats thoughtlessly left up.  Also, better hair care products (no offense Gaia). 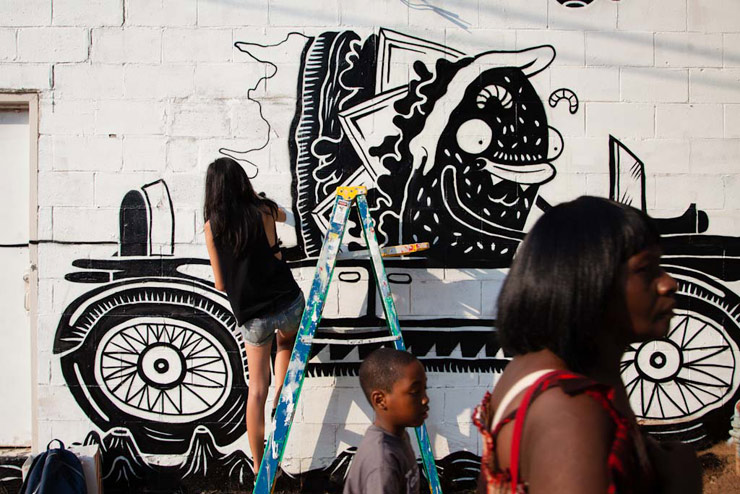 “Over the past two years, 50 artists have participated – only two were female, and neither of them had a chance to paint a wall,” remarks Parrish as she illustrates the imbalance.

Of course there are already new pieces up to greet the participants that were done since March leading up to today’s opening that were not done expressly by females. Readers of BSA have seen an array of international artists from all over the world that came to paint big murals every month since including Gaia, Nanook, La Pandilla, Trek Matthews, Interesni Kazki, Evereman and Neuzz.

Here’s a Teaser for DAY 1

See the BSA posts this year for all of the installations leading up to this day: