Brooklyn based Street Artist Over Under opens his first solo show in “Building on Building” opening at XYandZ Gallery in Minneapolis, transporting his architectural fever dreams to Minnesota for a hot minute.  It’s all about relationships. 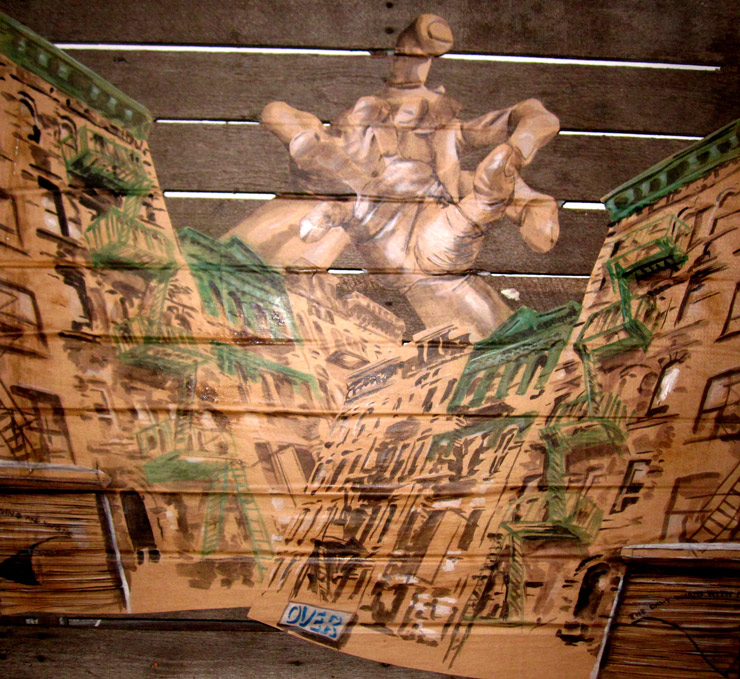 Artists who run in the streets of dense cities have a special relationship with buildings, seeing them as potential canvas, laboratory, love affair, and sometimes their perdition. In Over Under’s case, the very structures he was painting and pasting upon got recycled through his mind as worthy of caricature and portrait.

Approximately a year ago when the artist’s prolific output was hard to miss, his fascination with our built environment went on a full REM cycle with a continual metamorphose of architectural elements bending and bundled together with lyrically disembodied limbs. During his nearly two weeks in Minneapolis making work with his buddies Broken Crow, the arms and legs continue to poke into and out of roofs, windows and walls like so many orifices and protuberances entangled in one stately mass. 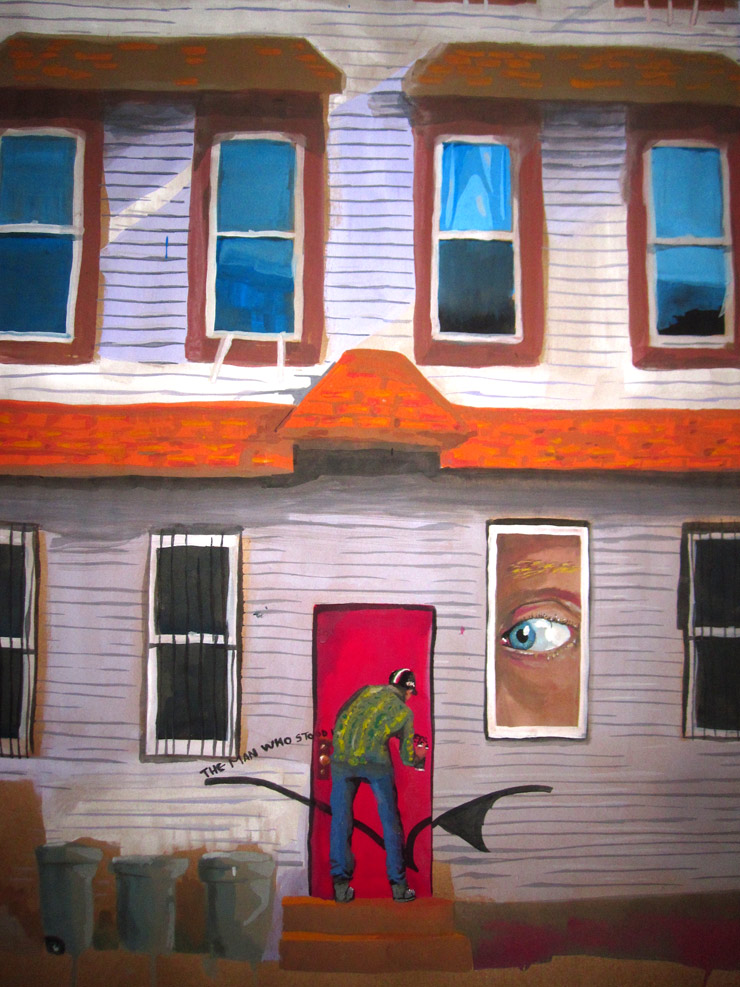 Over Under (detail of a piece for “Building on Building”) features a painting of a figure spraying across the door way, clearly under a watchful eye. (photo © courtesy of the artist)

Passersby here are sometimes astonished, and filled with questions. Is he exploring the relationship between space and personal relationships or is he examining the construct/construction that creates inside and outside, or is he reacting to the ongoing overtaking of Williamsburg and Bushwick real estate by dullard developers? Or is he just in love?

And what about this iconic flying plane with a stream-of-consciousness line of haiku diary entry arching over it? Is it a bird? Is it graffiti, a tag, Street Art or vandalism? Maybe these questions are at play because Over Under is still playing with them, or maybe because there are not clear answers.  To us it’s all part of the conversation on the street, which never stops. Tonight, however, the conversation goes in through the doors as Over Under brings the buildings and bridges and foundations and superstructures and rolldown gates and lithe limbs inside for the night. We’ll see what sticks out. 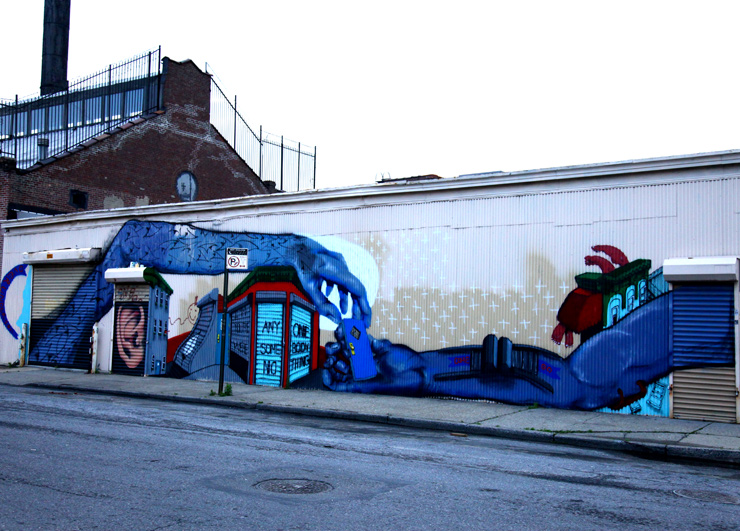 A recently completed large scale wall in Bushwick, Brooklyn by Over Under (photo © Jaime Rojo) 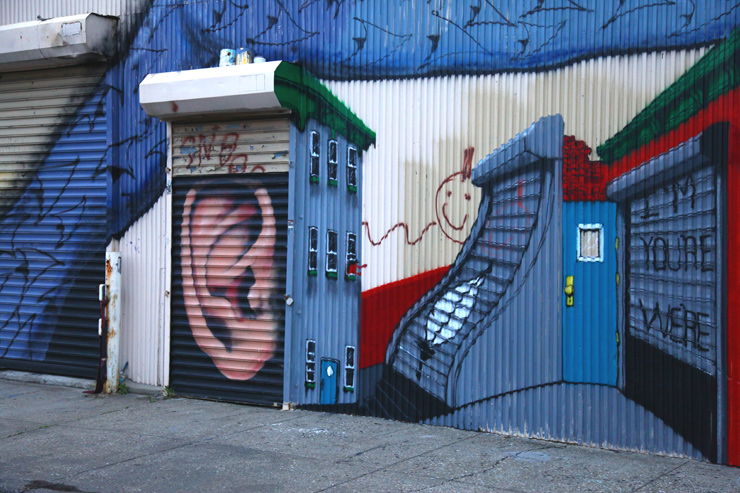 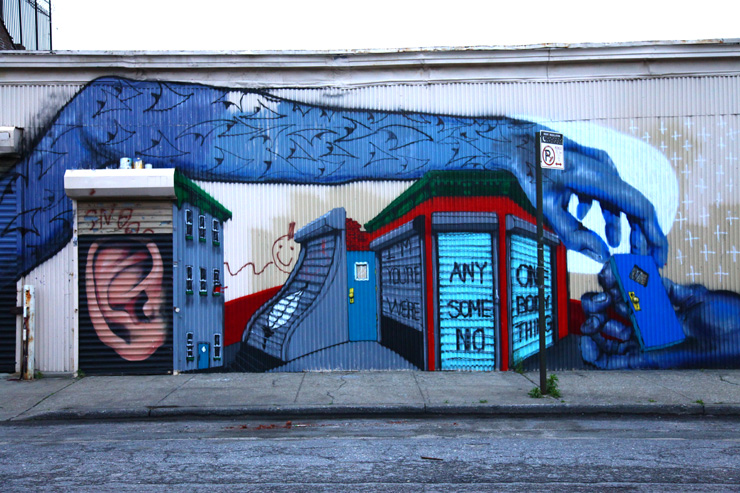 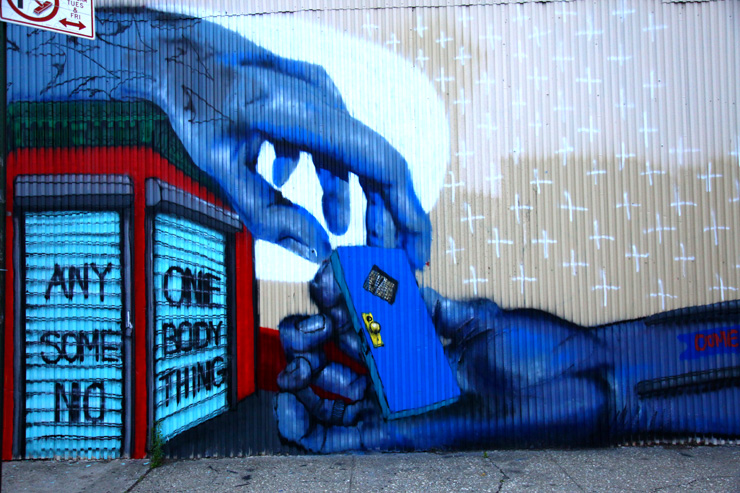 A Video Completed Yesterday by Over Under