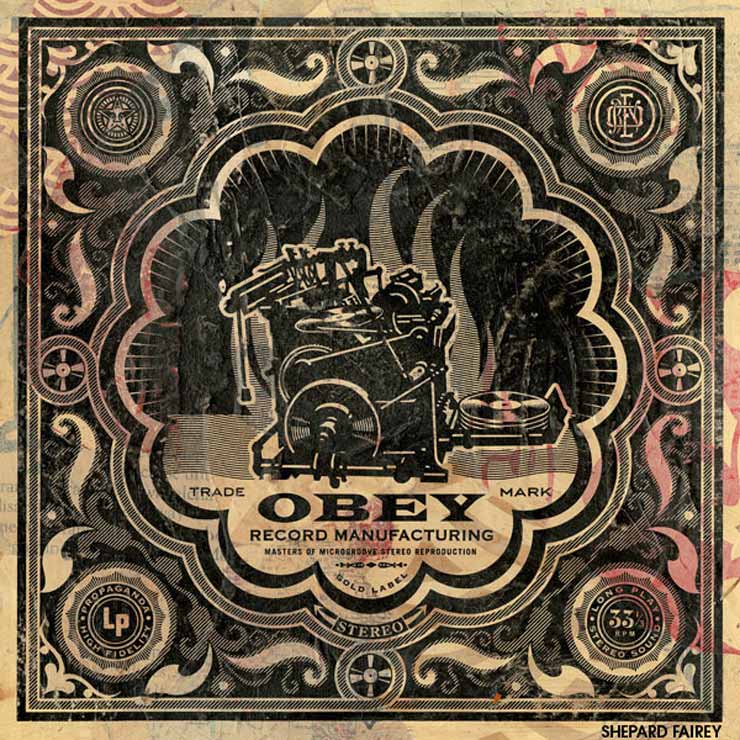 Anchoring this year’s exhibition schedule, Black Book Gallery in Denver will be welcoming powerhouses, Shepard Fairey, Even Hecox and Jim Houser together in a group show during the month of August. Denver is a common place to meet for the three artists, who all have held significant exhibitions in 2012. Houser’s artwork appeared at LeBasse Projects in Culver City back in April, Hecox was at Joshua Liner Gallery in June and was also featured in Juxtapoz last month and Fairey showed work at Pace Prints in the spring.

One of Shepard’s most noteworthy visits to Denver was for Manifest Hope during the 2008 Democratic National Convention. Fairey, of course, is known for his repetitious images. Two of his most prominent images include, “Andre The Giant Has A Posse” and Obama “Hope” he created during the 2008 election, which became a national icon of an era. The Manifest Hope art show marked a turning point in Denver art appreciation, which continues to expand today.

Siting Marshall McLuhan, a well-known media and communications theorist, Fairey uses the slogan, “the medium is the message,” which can be found throughout his work. Fascinated by philosophy in general, Fairey also draws influence from the notion of consciously structuring the subjective experience, known as phenomenology. In this way, Fairey’s work can be seen as a study of using media and artwork to create personal realities.

Hecox, who is based in Denver, records the detail of his surroundings in snapshots and moments in time. These frozen frames depict layers of the urban environments that Hecox is so curious to know. Cities radiate their own unique energy, when even a walk down the street can present a feast for the senses. By precisely and diligently placing the details of day-to-day urban life, Hecox recreates the beauty of simply existing in this space. Working from his own photographs of cities around the world, Hecox maps these scenes in a multimedia fashion. Gouache and acrylics, pencil drawings and ink washes are consistent medium choices for the artist. Having shown internationally, Hecox’s work resonates across a wide audience base, perhaps because of their diversity in nature.

This will be Houser’s second show at Black Book Gallery. Houser brings his familiar lines, colors and mix of props. Emphasizing the arrangement of his mixed media work, including installation, to create a unique exhibit each time, Houser tells stories and stacks hidden meaning throughout. Each individual piece Houser creates is carefully made and can stand alone, but it is the sum of these parts that make up Houser’s larger statement.

The opening for the Black Book Gallery exhibit, titled, “Fairey | Hecox | Houser,” is August 3rd. This will be a great way to begin the descent into the fall gallery season. If you’re in the area, be sure to swing through for a glimpse at the combined efforts of these three prime artists who have not only grown up along with, but also have significantly contributed to the contemporary canon of street-influenced art today.

OPENING RECEPTION:
Friday, August 3rd 6pm-11pm
Artists will be in attendance
Open and free to the public

MURAL INSTALLATION:
Shepard Fairey and Evan Hecox will be installing murals on the Metropolitan State College of Denver CVA (Center for Visual Arts) We will have more information soon.

PANEL DISCUSSION AND BOOK SIGNING:
On Friday, August 3rd there will be an invite only panel discussion with all 3 artists at the Metropolitan State College of Denver CVA (Center for Visual Arts) – More information coming soon.