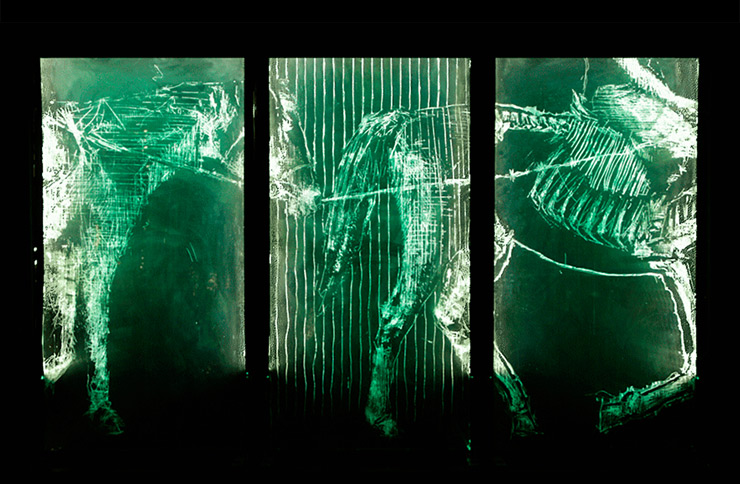 The Norwegian visual, public and conceptual artist DOT DOT DOT continues to define and explore his voice in his stencil works, whether solo or in collaboration. This year his detailed illustrations of vintage spray cans drew attention to his bonifides as an aerosol culture preservationist and his indoor/outdoor installations with the Urban Nation Museum for Urban Contemporary Art (UN) exposed him and his work to new audiences. For a 90s graff writer growing up outside Oslo, the move to an international stage continues, as does his taste for discovery. Today, at the beginning of the New Year, DOT DOT DOT says he is inspired by the work of another Street Artist/fine artist, Borondo, and his animated multi-layered glass installation on the art mile at Urban Nation this September- encouraging each of us to move forward.

We all have ended up in a certain safe path, and when something works it’s difficult to step back and break out.

“Hierarchie” by Gonzalo Borondo at the opening of the new Urban Nation Museum for Urban Contemporary Art (UN) in Berlin, is a proof that we evolve.

“I wish the best to everyone out there to never stop growing, never be the same, make room for the possible and to believe in creating infinity… Happy New Year!

Towering Gallery Full of Art to Be Demolished : "La Tour Paris 13"
The numbers are astounding; 105 artists, 9 floors, 36 apartments, 30,000 visitors. One hour. That is how much time Street Art enthusiast Spencer Elzey had to himself inside the largest galle...
Jerkface: "Saturday Mornings" Deconstructed, Reconstructed, Repeated
“We all draw from memory,” says Futura 2000 in the introduction, “and default to past experiences, finding associations to the various cast of characters. In some cases the faces have been changed to ...
BSA Images Of The Week: 06.28.15
Yo sis the joint was rockin this week in the USA with public healthcare snatched from the jaws of defeat, Same Sex Marriage approved by the Supreme Court coast to coast, and Obama singing Amazin...
Joereal Takes Painting to the Roof top and Beyond (Video)
Joereal in Los Angeles likes to paint up on his roof and think about yoga and the spiritual life. He sends this brief video for you to contemplate many such things as you travel through this Saturday....
NYC Subway Cars: From Rolling Canvasses to Rolling Billboards
“If I had my way, I wouldn’t put in dogs, but wolves,” New York mayor Ed Koch suggested famously as a facetious proposal for loosing ferocious animals on graffiti writers in the train yards in the ear...
Brooklyn Sreet Art DC Dot Dot Dot Eli Reed Jaime Rojo Million Man March 1995 Steven P. Harrington Washington