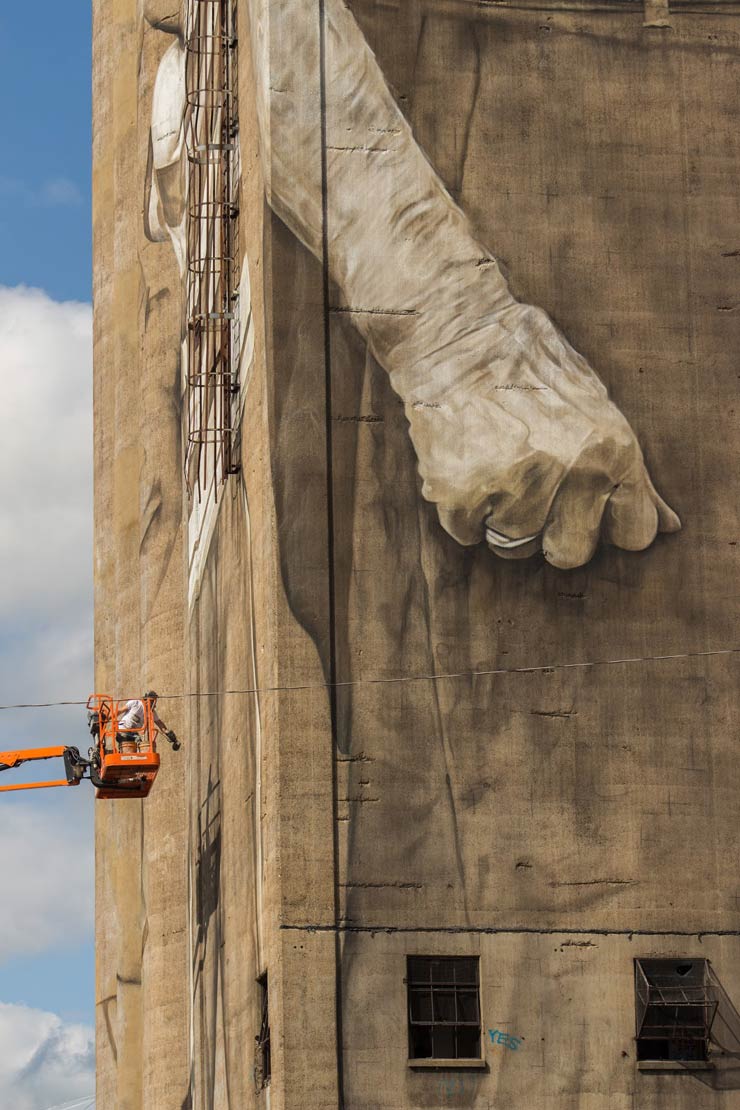 The up and coming, soon-to-be-hip Nashville neighborhood christened “The Nations” will undoubtedly presently have an ironically old-timey barbershop with Millenially bearded men wearing pocket watches and tattoos as trendy arts neighborhoods often do at the moment.

“You know I grew up on Pennsylvania Ave,” says local Vickie Gilliam Keeton on a Facebook post that addresses the new massive mural by Australian Street Artist Guido Van Helten. “But I’d never heard this area called ‘the nations’ till just in the past 10 years. It was always just West Nashville.” It may be a case of re-branding a former industrial zone for future development. 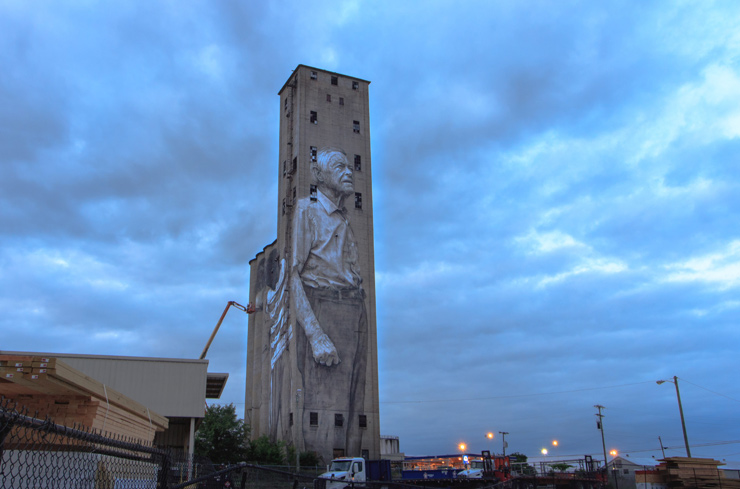 “It used to be Gilette grainery,” says the man who is the subject in the new soaring portrait, 91 year old Lee Estes, who has lived in the neighborhood since the 1920s – a time when houses like his didn’t have indoor plumbing. In an interview with Amy Eskind of Nashville Public Radio he continued “And we had another, Purina grainery, that was demolished years ago, but they left this one as a historical part of the Nations.”

It is a stand out for sure, this old silo, raising into the sky above all the others nearby. With the dignified Mr. Estes representing the past history of the area in almost sepia tones, it is a reassuring reminder of the areas character and working class industrial roots. Three Corners Coffee on Centennial Boulevard may already indicate the changing character of the area that the new mural joins. Describing itself as “a homey coffee shop specializing in great brews, friendly baristas, and vintage charm,” it also sells vintage furnishings, baby onesies, and dish towels and provides a retro 1970s domestic warmth for visitors. Nevertheless it appeared to let down one customer writing on Yelp recently who could not give it five stars. “Deducted one star because they were out of brioche breakfast sandwiches at 9am on a Friday morning.”  From no indoor plumbing to no $5.95 brioche breakfast sandwiches is a bit of a jump. 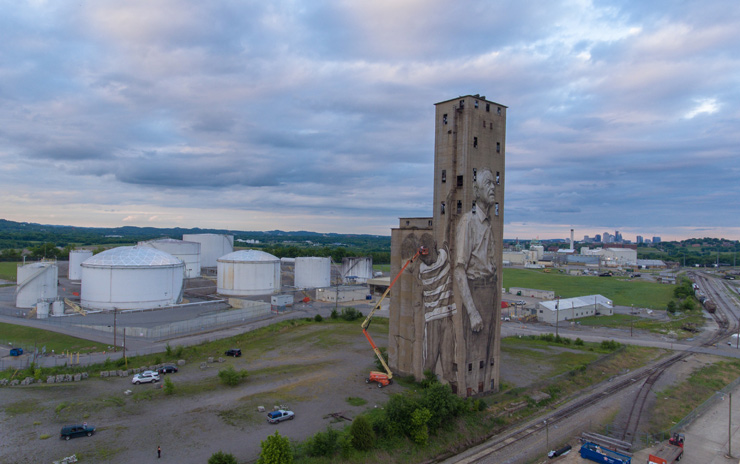 This is all part of a mural project called Nashville Walls Project that has brought a number of Street Artists to the city to paint in the last couple of years, including Herakut, Louis Masai, Curiot, Niels “Shoe” Meulman, Rone, and Tavar “Above” Zawacki. Co-founded by Street Art gallerist and art collector Brian Greif, who produced the movie “Saving Banksy” in which he personally recovers an original Banksy from a wall in San Francisco, the Nashville Walls Project is adding a new excitement and character to the area that is approximately bounded by Charlotte Avenue, the Cumberland River, Richland Creek and the CSX railroad tracks.

We’ve contemplated it in our writings, debated it on panels around the world, listened to impassioned conversations about it in bars, this gentrifying cycle and the accusations lobbed at artists; this cycle of gentrification that the creative community unwittingly aids sometimes through its own industry. There appears to be a direct relationship between the positive aspects of reviving a moribund sector of a town or city with murals and the eventual rise in rents and costs of services that invariably push out the poor and working class. 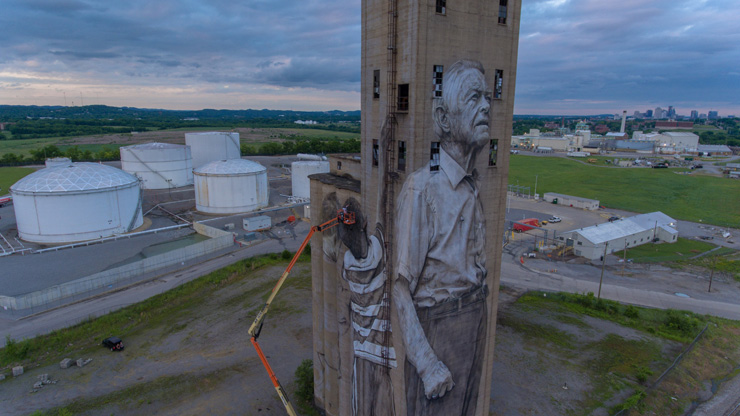 Not surprisingly, the artist who created this beacon of warmth and humanity has the same observations that he has gained from his travels.

“I find the relationship between murals and gentrification conflicting, and in this work there is this conflicting yet harmonious composite of the two sides of social change,” says Van Helton in an interview with the other co-founder of Nashville Walls Project, Éva Boros, published on NashvilleArts.com “There is juxtaposition between a mural that discusses and commemorates the blue-collar demographic while at the same time being a powerful part of the change in the area. This is a dialogue and talking point that I hope this mural can create.” 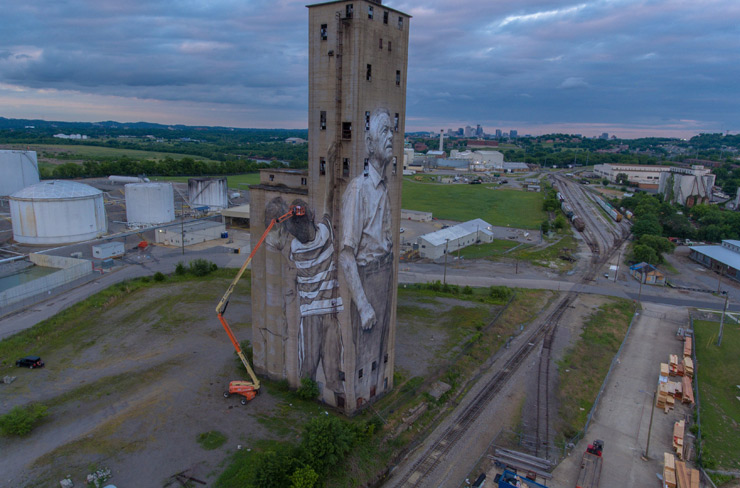 For the moment, this new looming portrait is a fine example of elevating a local citizen in his community and a focal point for neighborhood pride, and Mr. Estes has enjoyed a great amount of congratulations in person from folks who have known him for years. Mr. Van Helten has also received much praise and thanks from people in the area in postings on social media. The young kids painted on the mural around the corner are also local from the community center nearby, representing the future of the neighborhood that many are hopeful for.

Kelly Evans wrote in a Facebook posting to the artist a sentiment that combines the sentiments of many. “From the bottom of my native Nashvillian heart thank you so much for understanding. Before I even read the commentaries and articles, when I stood outside your unfinished work, I understood some of what you are trying to say. This so strongly moved me. Tears of love for our fathers that built this “big little city” poured. My prayer is that we are not priced out of our homes we so lovingly built and raised our families in.” 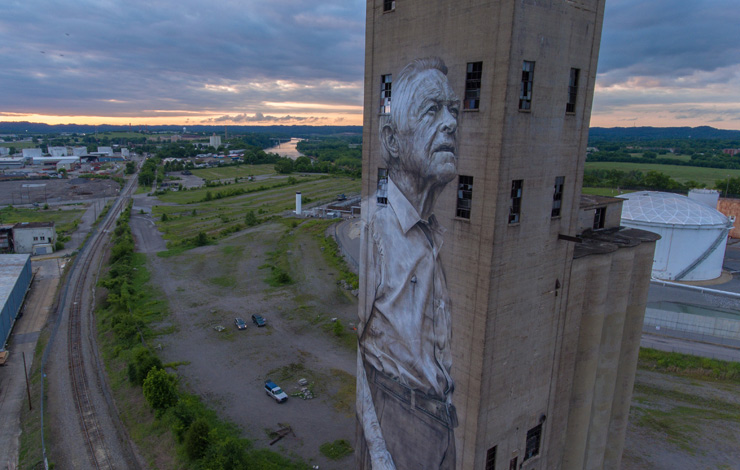 Brian Siskind documented on Guido Van Helton painting for 17 days to complete the enormous figures. This is his record the final day. Mr. Siskind says he will be combining all the videos into one complete overview of the project shortly. 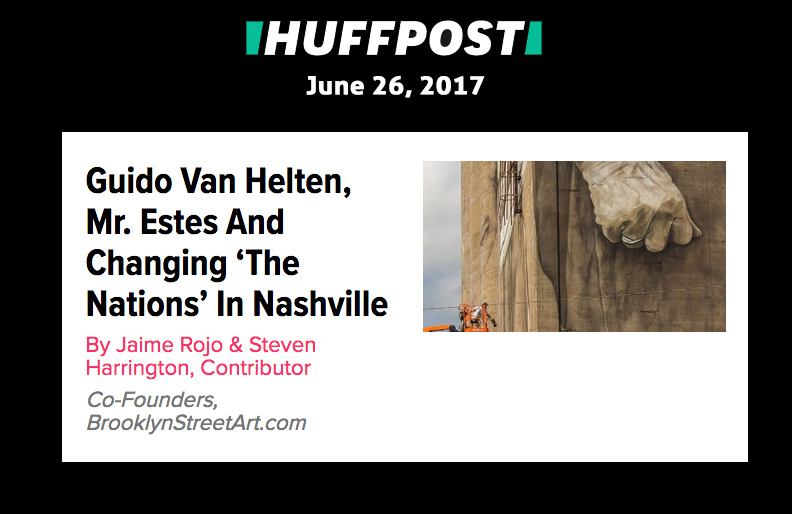 BSA Images Of The Week: 10.12.14
Here's our weekly interview with the street, this week featuring Bishop203, Blek le Rat, Caratoes, Cone SP, Cost, Dasic, Eelco "Virus" van den Berg, ENX, Enzo Sarto, Jerk Face, Nemo's, Ripo, and...
INO and "Broken" in Fortaleza, Brazil
The Greek Street Artist INO has been consistently observing the social and political factors that are at play in modern society and has been addressing these themes through his work painting large mur...
Berlin Dispatch: Spotted Berlin Kidz
If you know the Berlin Kidz you think about adrenaline every time you see their bi-color Pichação verticals on the side of a building – or smokestack. As foreigners, the official language is daunting...
BSA Images Of The Week: 07.05.20
Welcome to BSA Images of the Week. Hanging tough is what New York does, and the art in the street is 10X more potent than six months ago. It's almost cliche to say that Street Art and graffit...
OBEY MARTHA: Shepard Fairey Pays a Large Tribute to Martha Cooper and "Defiant Youth" in New York
Sidewalk Philosopher Fairey Talks about New York, LA, Hype, May Day and this country of immigrants while pasting a building-sized ovation to a photographer and her work. Shepard Fairey Shepard...
Brooklyn Street Art Eric E Johnson Guido van Helten HuffPost Jaime Rojo Nashville Nashville Walls Project Steven P. Harrington TN