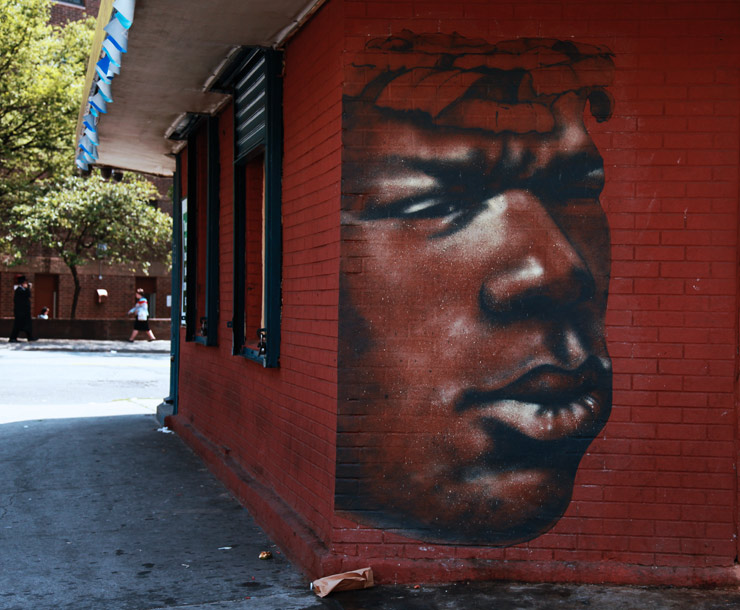 For this Sunday’s edition of BSA Images Of The Week we have decided to publish one image only. It’s a brand new piece and is a portrait of an anonymous African-American man painted by Street Artist Overunder and wheat-pasted somewhere on the streets of Brooklyn.

“It’s a portrait of an anonymous black man. So it very well could be a victim, or a future victim,” he told us in an email.

This week has been a horrific one on the streets in this country. Forgive us if we speak too much here or are out of our depth but we are on the street a lot obviously and we think the conversation among all of us needs to continue if we are going to find solutions. The new videos posted online of our citizenry being murdered, some at close range, others in ambush, tell a story of where we are as a nation right now.

After seeing the videos of Philando Castile dying of gun shots by a police officer in Falcon Heights, Minnesota and of Alton Sterling being shot at close range by a police officer while subdued and on the ground in Baton Rouge, Louisiana viewers can walk away from them feeling as if they were being witness of the shootings. Seeing police downed by sniper fire in Dallas has confirmed that violence is not the answer.

We are bigger than this, all of us.

One would have to be either racist or delusional or both to not be angered, outraged, horrified, worried and profoundly saddened by the images coming out of those videos and photographs.

But we’ve inherited the legacy of our past and no one should feign surprise that we are dealing with it nor deny its impact on us today. Americans used to send postcards bragging that they had attended a lynching of a black man or woman, and most of those acts were to punish imaginary transgressions. Picture postcards.

Suddenly the lyrics of “Strange Fruit” sang first by Billy Holiday and later by Nina Simone and others come to mind. Those disturbing, haunting words could be easily applied in today’s America. The “…Black bodies…” are not “…Swinging in the southern Breeze…” -they are being tossed around in the back of a van, or trampled upon, or choked, face down against the hard and dirty concrete of our cities’ sidewalks. They are slumped, bleeding inside their own cars. They are suffocated and piled upon while gasping for air. They are taken down while playing in the playgrounds or just walking down the street, any street. Now we are seeing them on our phones.

Sweep it under a rug for a while if you like, but it won’t go away.

The police officers who were murdered in Dallas while on duty and while protecting the people who had gathered peacefully to protest the killings in Baton Rouge and Falcon Heights didn’t deserve to die. Random or targeted killing of police is despicable. Their families were waiting for them to have dinner together and to do what families do at the end of the day. Instead their lives were cut short and now their families have to cope with the loss of their fathers, husbands, brothers, boyfriends, friends.

Violence against police is not going to solve any problems because it assigns collective guilt – and we know the majority of cops are good hard-working everyday people trying to do the right thing. It is also just as morally wrong as violence against citizens. We are collectively smart enough not to allow this complicated scene to be simplified by media needs to polarize us into separate camps like it is a sporting match. Some families have police and protesters sitting at the kitchen table and those families, like our greater American family, find a way to identify common ground.

Many have observed that brutality against people of color is not new – we just have cameras to record it in this modern moment and now the utter pain and injustice is available for us all to see and discuss with each other. It makes you wonder about the complicity of the news organizations over the last decades, doesn’t it? Now that we all are confronting it, let’s do the right thing and work toward a more just society.

It’s racism. It’s systemic. And we can fairly call it a broken system.

That’s why there are demonstrations system-wide;
across the country over the last few days in tens of cities like Philadelphia, Tucson, Oakland, Austin, Portsmouth, Norfolk, Portland, Nashville, New York, Chicago, St. Paul, Birmingham, West Palm Beach, Columbus, San Antonio, Los Angeles, Phoenix, – even Brixton in the UK. Our consciousness has been raised – and we realize there is work to be done.

We have to believe that the majority of people don’t want to go out on the streets and do this marching and yelling – most people would rather be at a swimming pool or in a movie theater or sitting under a tree with a cold drink. But the system is broken, has been for a long time, and the injustice, pain and fears are simply too great and people are demanding solutions.

We just collectively are realizing that we can’t be silent anymore about the evidence that blacks and other minorities are being subjected to the use of force disproportionately than any other group by many police officers around the country. According to The New York Times the data is there to support the assertion in a new study released on Friday titled “The science of Justice: Race, Arrests and Police Use Of Force”

“When force is used, a new study has found, the race of the person being stopped by officers is significant,” the Times says.

Let’s not blame anybody else, let’s not be cynics, or try to deflect. These problems belong to all of us and we have to accept responsibility for improving things in our own back yards, our front yards, our sidewalks, parks, stores, stadiums, museums, laundromats, offices, schools.

What people of color have to endure day-to-day in this country just to run an errand is everyone’s responsibility. Creating an environment where people live in a continuous low-level state of fear is immoral and it’s certainly not in alignment with Christian values, nor those of any organized religion we know of. We all are morally obliged to make certain that we all as people are treated equally and with fairness. That’s the real American way. When there is injustice, we all have to be accountable for a system that corrects the injustice.

We all deserve to go home at night to those whom we love and who are waiting for us to share dinner, to tell a story, say a prayer or be kissed goodnight.

And since it is July and it is hot in NYC and across the country; please brothers and sisters, protesters and police, let our cooler heads prevail. We can do this.

Judith Supine is "Too Much for One Man"
Bloated heads, severed limbs, plump and luscious lips; these are the fruits harvested from art, fashion, and porno magazines, carefully cut from their previous contexts and precisely reconfigured to r...
Wall\Therapy 2015 Day 3
In Rochester the weather has been warm but workable, as evidenced by the progress that all the artists have been making. You don't have a long summer in this city of Kodak so we happily have images ...
VNA Magazine #34 with BSA, Martha Cooper, Yasha Young, Selina Miles and More
A constant and influential voice on the contemporary urban art scene for one decade VNA (Very Nearly Almost) has been charting the magnificently murky waters of graffiti and Street Art and many of its...
Etnik Decontructs and Grows Acanto Leaves in Barcelona
Etnik continues his deconstructivist investigations, drawing upon his history as a graffiti writer and a student of architecture, on this new wall in Barcelona. An illustrator and toy designer in addi...
BSA Images Of The Week: 09.18.16
We debated whether or not to open today's edition of BSA Images Of The Week on a political note with new Donald Trump related art or with an uplifting image of an almost universally recognized s...
Brooklyn Street Art Jaime Rojo OverUnder Steven P. Harrington