BSA is in Berlin this month to present a new show of 12 important Brooklyn Street Artists at the Urban Nation haus as part of Project M/7. PERSONS OF INTEREST brings to our sister city a diverse collection of artists who use many mediums and styles in the street art scene of Brooklyn. By way of tribute to the special relationship that artist communities in both cities have shared for decades, each artist has chosen to create a portrait of a Germany-based cultural influencer from the past or present, highlighting someone who has played a role in inspiring the artist in a meaningful way.
Today we talk to El Sol 25 and ask him why he chose his person of interest, Hannah Höch.

A collage artist who often creates paintings of his original cut compositions and wheat-pastes them onto walls, El Sol 25 has been entertaining and perplexing passersby on the street with his theater of the absurd for the last half decade in New York.  Considered part of the new breed of Street Artists who are breaking conventions, for this show El Sol 25 looks back to a Berlin rebel and one of the most important collage artists of the 20th Century, Hannah Höch, for inspiration and as tribute.

Indeed there are many similarities in the works of both; a true fragmentation of elements that reflects a chaotic aspect of current society, an embracing of diversity and abstraction, the questioning of gender constructions, even the inclusion of elements that may have shown in Höch’s fictional “ethnographic museum”.  Where Höch was a singular woman in a Dada movement dominated by men, the former graff writer El Sol 25 has steadily constructed his unusual oeuvre in a sometimes sea of Street Art sameness.

El Sol 25 is creating a portrait of Höch for PERSONS OF INTEREST because she proved to be a leader and because he admires her different standards of composition and beauty. “She’s one of my all time favorites and also a native German so I really wanted to pay my respect by painting her portrait,” he says. “She was a key innovator in the original Dada movement and her collages are the strongest I’ve ever seen.”

Then he adds, “She is my hero for many reasons.” 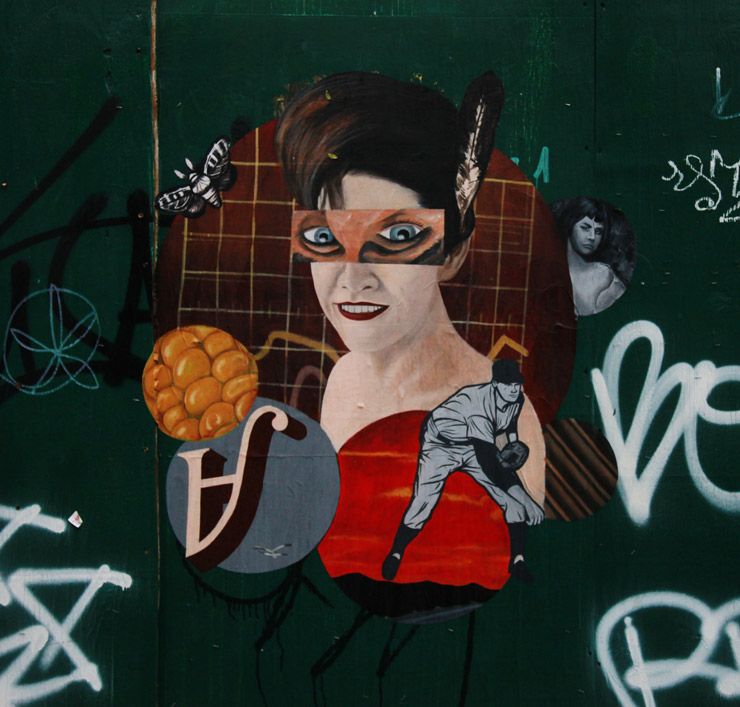 6 New City People on the Streets of Beijing from ROBBBB
"Cityscape" is a word that usually refers to the architecture and urban design but Robbbb refer’s to Beijing residents when he calls his ongoing series by that name. “These works reflect the real livi...
BSA + UPEA in Finland
BSA is excited to bringing you new works from Finland next week as we explore Helsinki and nearby cities that are part of the UPEA 2018 Festival. A unique model of mural festival that invites internat...
Bifido Takes Off Mask in Bonito, Italy
The inner world of kids. Bifido. "Basil Hallward". Collettivo Boca. Bonito, Italy. June 2018. (photo © Bifido) Bifido is frequently using his photography and wheatpastes to conjure a realistic vis...
Streets at the Table for Artists Ball at Brooklyn Museum
Five years into it, The Brooklyn Artists Ball has become a glittering spectacle that speaks to the traditional, the contemporary, and the beat on the street. This years greatest hits collection not on...
Nychos "Battlecat" and Lauren YZ "Night Flight" in Providence
Exclusive shots today for you from Nychos and Lauren Ys in with his “Battlecat” and her “Night Flight” in Providence, Rhode Island. With styles that are complimentarily in some of their fantasy based ...
Berlin Brooklyn Brooklyn Street Art BrooklynStreetArt.com collage El Sol 25 Hannah Hoch Jaime Rojo painting Steven P. Harrington Street Art UN Urban Nation Wheat paste