BSA is in Berlin this month to present a new show of 12 important Brooklyn Street Artists at the Urban Nation haus as part of Project M/7. PERSONS OF INTEREST brings to our sister city a diverse collection of artists who use many mediums and styles in the street art scene of Brooklyn. By way of tribute to the special relationship that artist communities in both cities have shared for decades, each artist has chosen to create a portrait of a Germany-based cultural influencer from the past or present, highlighting someone who has played a role in inspiring the artist in a meaningful way.
Today we talk to Chris Stain and ask him why he chose his person of interest, Charles Bukowski.

Street Artist Chris Stain picks German-born American poet, novelist, and short story writer Charles Bukowki as his Person of Interest and it’s not hard to tell why. In his stencils and projection paintings Stain has recalled the struggles of the working class in the US, a background similar to his own youth in Baltimore, Maryland. “I want to convey an authentic contemporary document that illustrates the triumph of the human spirit as experienced by those in underrepresented urban and rural environments,” he has said when describing his work.

Bukowski championed a grizzled hardscrabble unromantic depiction of everyday life that was informed by his own family dynamics upon moving to Los Angeles as a child with a funny accent and an abusive father. His stories gave an up-close view of ordinary lives of many of America’s poor, richly bleak with beauty in the ugliness, dread and drudgery – along with observations about coping mechanisms that could be self-destructive. In 1986 Time called Bukowski a “laureate of American lowlife”,[note]Wikipedia, Charles Bukowski[/note]  a typically dismissive and classist review of his work by mainstream press, but his multiple novels, short stories, and other writings were highly valued for giving voice to many fans who saw their own lives reflected in his art. He also showed that he had of a sense of tough humor.

“I guess the only time most people think about injustice is when it happens to them.” – from Ham on Rye

“If I bet on humanity, I’d never cash a ticket.”

“The problem with the world is that the intelligent people are full of doubts while the stupid one are full of confidence”.

“I started reading the works of Charles Bukowski about 20 years ago,” says Chris Stain. “I can’t say I agree with all of his opinions but what keeps me returning to his books is his sheer honesty as he relates to the common people. Throughout his literary embellishments he maintains a certain amount of hope that I believe everyone can relate to as they traverse life’s pain and wonder. I feel honored to be able to create a portrait of this German born American poet in his homeland. “ 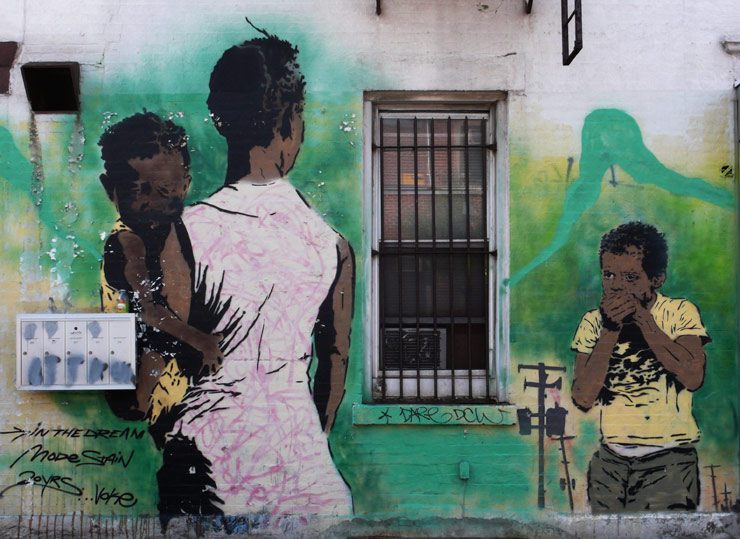 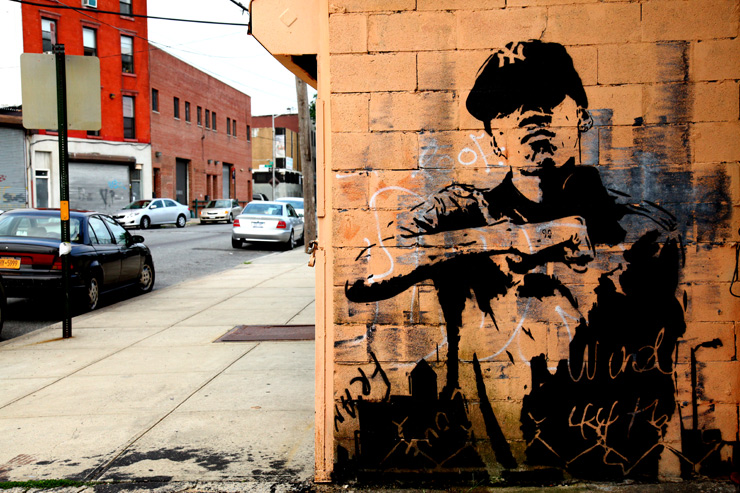 JACE in Grigny, France Brings the "Gouzou"
“Gouzou” are on the loose in Grigny, thanks to their creator, French graffiti writer and muralist JACE. JACE. Wall Street Art Festival 2019. Grigny, France. (photo © Galerie MathGoth) A childr...
Saype in Cape Town, South Africa with "Beyond Walls"
Three frescoes in Sea Point, Cape Town, South Africa are the latest installments of hands and arms joined with one another for the French large-scale land artist Saype. Saype. "Beyond Walls" 9th ...
Skount Levitates From Under an Overpass
Introverts of the World Unite! Brother, its hard out here. Not just the economy and the evaporating social net and the haters. But for the introverted types, and there are many in society, just havi...
A Street View From Inside the Doors of Mexico City ; Galleries, Studios, Museums, and the Metro
Street Art and graffiti and their relatives often go inside these days, including in Mexico City, where we recently found some interesting new intersections between urban art and contemporary art when...
BSA Images Of The Week: 03.04.18
We made it! But it was a rough few days just finished with storms and rain and snow and high winds and flooding and downed trees around New York and its environs. Similarly, as one surveys the c...
Berlin Brooklyn Street Art BrooklynStreetArt.com Charles Bukowski Chris Stain Jaime Rojo murals Persons of Interest Stencils Steven P. Harrington Street Art UN Urban Nation