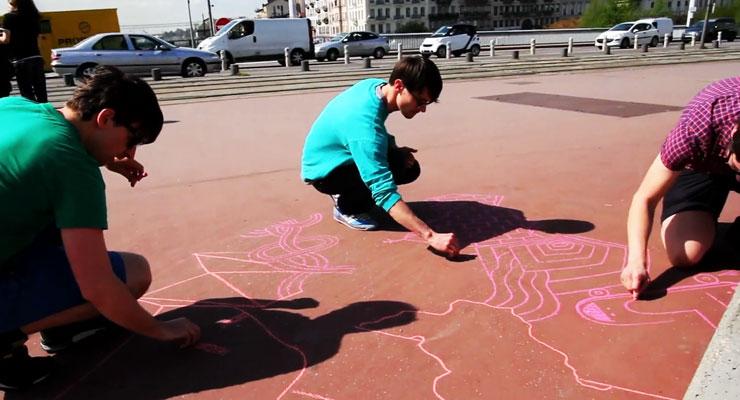 Now screening: KLUB7 “Sleepless in Lyon’, Black Flag and the Art of Punk, and The Ghost Army.

Klub7, who are not always 7 in number but who seem like there are 77 of them when in action, are a Berlin collective of illustrators who customize the built environment in two unusual ways that when combined put them in a very sparsely populated category of Street Artists; A. They use chalk a lot – and B. They draw on the ground.

These expandable/contractable, flowing blobs of geometry and symbols and cartoonish faces and text are made a the moment of inspiration in plazas, on steps,  on sidewalks – and are as close to harmless and as far from vandalism as one can get.

This little film was made during April on their trip to Lyon for a show at Le Bocal Galerie and it captures the collective exploring the city and leaving their mark along the way – in a manner that makes you hope they offer you to join in. Their gentle deliberate dedication to playing with the simplicity of lines and shapes and the imagination on every surface – walls, glass windows, big rolls of paper, and canvas – only encourages people to try it themselves, and at the opening they did.

Shout outs to Diskorobot, Kid Cash, Mike Okay, Frederic Leitzke, and Matthieu Perret for putting the trip together here for you to enjoy.

The Art of Punk – Black Flag

And now something 180 degrees different from our first film….

Keith Morris starts it out;

Then you are treated to a full exegesis of the art and environment that gave birth to the Black Flag logo designed by Raymond Pettibon. You will never ever ever ever wonder again where this most popular tattoo came from. Unless someone bashes your head in at a punk concert.

A PBS special that seems too weird and cool to be true. How an ARMY of Artists and their imaginations made illusions and saved lives in WWII.

Images of the Week 11.20.11
Our Weekly Interview with the Street, this week featuring Cash4, Dain, Dan Witz, Ment, Miyok, Never, Troy Lovegates AKA Other, Stikman, and Stinkfish. Troy Lovegates AKA Other (photo © Jaime Rojo) ...
"The Art Of Protest" Opens Today; A Heritage of Creative Dissent Traced
Director Colin M. Day is probably having a riotous one right now because his new film debuts on Rolling Stone today; as The Art of Protest takes you through a landscape of dissent and resistance ...
BSA Images Of The Week: 02.05.17
It's surreal to be on the south side of the US border when Trump has just signed an executive order to build a wall, decides to try to pick a fight with the President of Mexico and drops a travel ...
BSA Film Friday: 05.13.22
Our weekly focus on the moving image and art in the streets. And other oddities. Now screening:1. George Booth life at The New Yorker2. DOES X JORIT team up for a large mural in Napels, Italy....
BSA Images Of The Week: 11.17.19 / Dispatch From Berlin
With Roger Stone found guilty on all 7 counts this week in the US, Donny Tinyhands appears to have more associates in prison than John Gotti did. During his own impeachment hearings this week the...
Black Flag Brooklyn Street Art Jaime Rojo Klub7 MOCAtv Steven P. Harrington The Art of Punk The Ghost Army WWII