Brooklyn born contemporary realist painter Laura Schecter takes cityscapes and graffiti into consideration as a formalist and you may even say with an element of romanticism. With abstract painter and “father of minimalism” Ad Rhinehardt as a teacher at Brooklyn College in the 1960s, Schecter says she evolved a philosophy of aesthetics.

In these paintings of building facades that are covered with graffiti in an urban environment, Schecter gives realist attention to the detail so accurate that at first glance most viewers will believe they are looking at the work of a graffiti or Street Art photographer who jumps fences, climbs rooftops, and follows train tracks to capture a shot. In fact, she can be equally enthusiastic about her regard for some of her finds. “I particularly feel graffiti beautifies blighted areas, and gives them style and dignity,” she says. 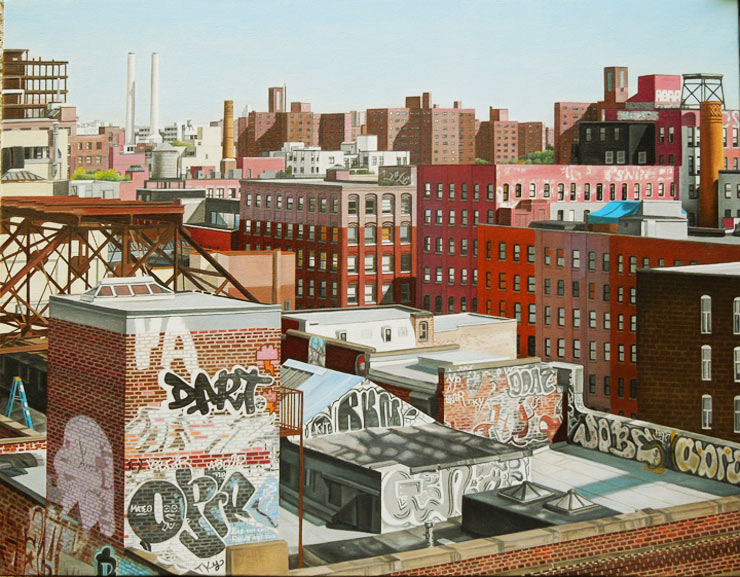 “Within contemporary realism, I consider myself a “perceptualist”, which I define as being more concerned with usual vision,” explains Schecter as she describes these paintings and her approach to the aerosol tattooed surfaces of the city. As most painters will tell you, it is about capturing the right moment when the sun and the ambient influences in the environment reveal character or a certain spirit.

“My cityscape paintings, which are photo-based, describe one moment of light. I have always been interested in decorative patterns and high key color.  So doing cityscapes with graffiti was a natural direction for my work to take. I render each graffiti artists’ work with the same care as I would a piece of satin or a handed painted 19th century porcelain piece.” 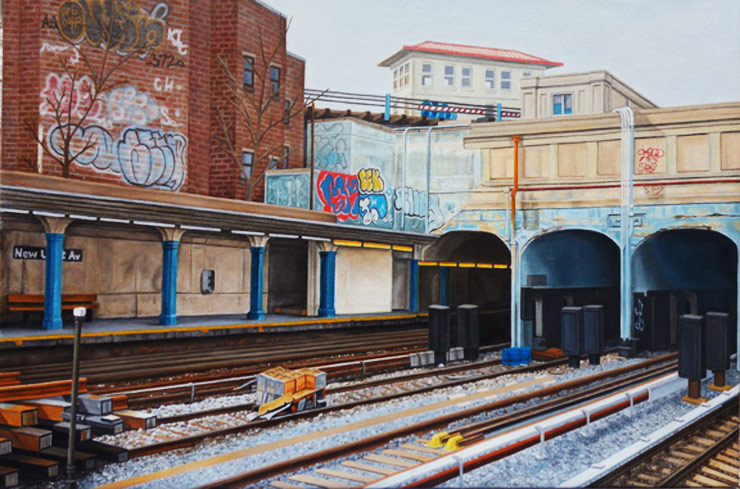 Schecter says her work evolved during the feminist art movement and she incorporated some of its ideas, but is also influenced by northern Renaissance art, Indian Miniatures, and interacting with other contemporary realists.  “I traveled around the world in the late 1960s and 70s and the experience added complexity to my art work which seems so rooted in western painting tradition, but also includes the aesthetics of the east, notably, India.” 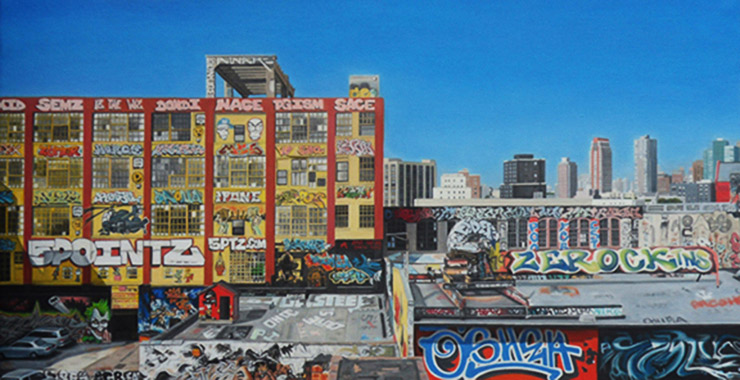 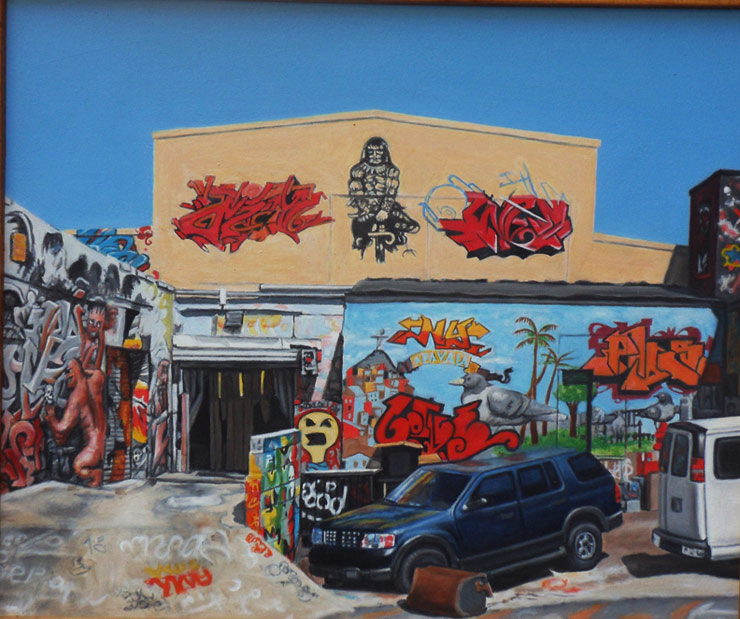 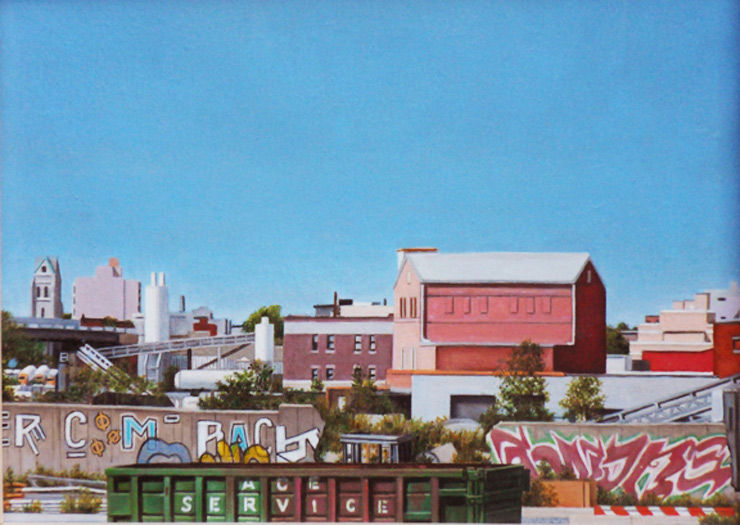 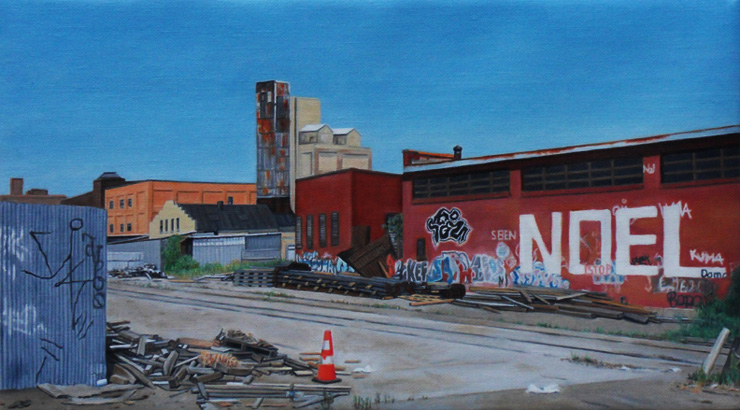 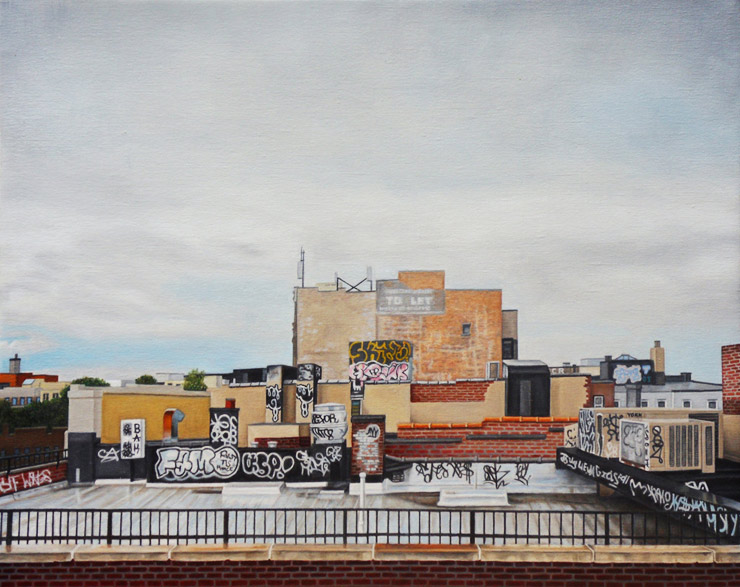 BSA Film Friday: 03.26.21
Our weekly focus on the moving image and art in the streets. And other oddities. Now screening: 1. DREAMER: Jahmal Williams Life n Art and Skateboarding.2. CASCADES: X L'Atlas x Emmaus x Art ...
A BLU Buffer Talks About the Grey Action in Bologna
Reality TV is usually completely devoid of reality. That isn’t the exact comparison Andreco said on his Facebook page but we thought it was a fitting analogy. Street Art in a museum or gallery can som...
Bishop203 and Laura Lee at HiChristina Gallery All Week: Get your Artfreak on!
Writers, Cartoonists, Nude Figure Drawing, Puppets, and Battlestar Galactica - you wouldn't think those things have much in common - although Puppetry of the Penis kind of ties many of them together,...
"The City As Canvas" Opens with the Collection of Martin Wong
Last night the graffiti and early Street Art history from New York’s 1970s and 80s was celebrated by the City of New York – at least in its museum. Criminals and outlaws then, art stars and legends to...
Spaik in Medellin, Colombia for "Pictopia"
The third edition of the Street Art and graffiti festival called Pictopia is taking place in Colombia right now and through November 19th in four cities; Cali, Medellín, Manizales, and Copacabana. Beg...
Brooklyn Street Art graffiti Jaime Rojo Laura Shechter NYC Steven P. Harrington