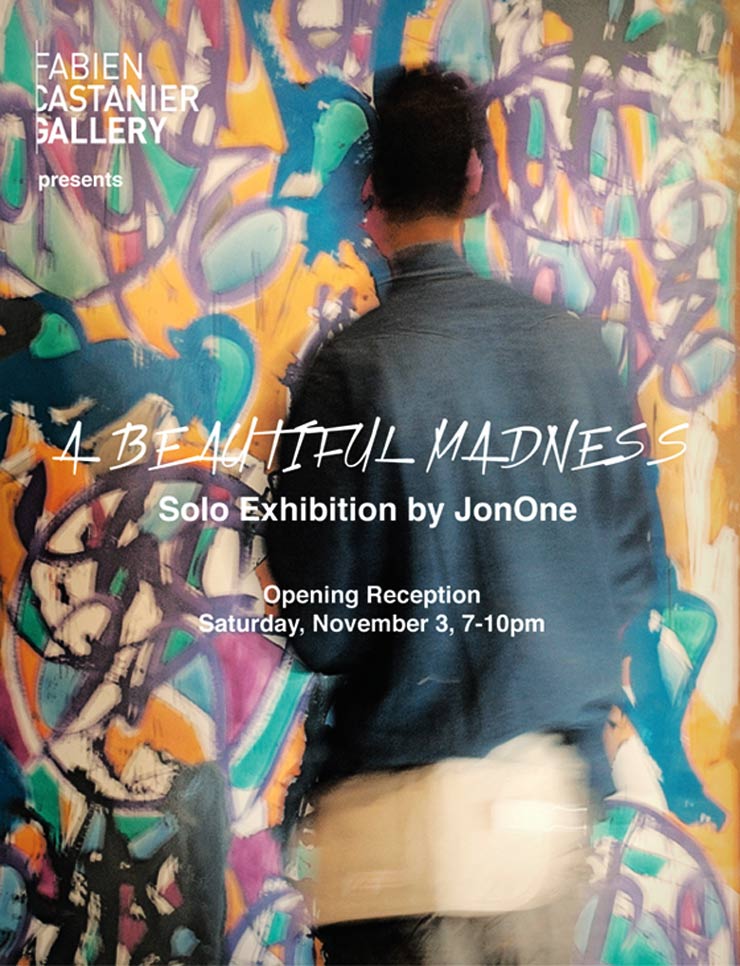 Fabien Castanier Gallery is proud to present A Beautiful Madness, the first solo exhibition in the USA by JonOne. Though raised in New York, JonOne has lived in Paris since the mid 1980’s where he has established himself as an artist, building a career that has spanned over 20 years.

From his early days as a youth, tagging the streets of Harlem, JonOne has always emphasized a painterly approach, bringing brushes instead of spray cans to tag subway trains. Drawing from the energy and freedom of painting in an urban landscape, he translates his roots as a graffiti artist into paintings that are a completely unique form of abstract expressionism. Akin to Jackson Pollock and Willem de Kooning, JonOne’s pieces exhibit an enormous sense of movement and color. His compositions combine freestyle, precise strokes, repetition and texture for a uniquely balanced yet dynamic visual experience.

“…my life is very fast-moving and intense, and I hope I convey that energy through my work. [My paintings] represent me but in a different dynamic from when they were linked to a street context.  The way I present my work has changed but I can’t deny my roots or my schooling. Even so, I don’t see myself as a street artist because I don’t feel that need to go out and do stuff. I’m not committed to a cause. I’m someone who’s converted the negative to positive and today my work is done in the studio.”    – JonOne, Transformations
(Interview with Marie Maertens, March 16, 2012)

JonOne’s paintings represent a new era of contemporary artists who have moved beyond their roots as graffiti writers to establish themselves as painters. Recognized internationally for his urban contemporary paintings, JonOne has stayed true to his artistic vision. From Paris to Shanghai, Casablanca to Hong-Kong, he has exhibited in galleries and art fairs around the world, resulting in a tremendous response from both the public and collectors as well as at auction.

Opening Reception will be Saturday, November 3rd, 7-10pm.
A Special Preview will take place on November 1st, 7-9pm.
Both are open to the public.

Images of the Week 12.05.10
Our weekly interview with the street, this week featuring: Alec, El Celso, Faile, Kenny Scharf, Kouk, Robots, and UFO The finished Kenny Scharf Houston Street wall has brought a jolt of flamboyant c...
"I'm In Miami Bitch", Andrew Kaufman photographs Wynwood
A. It has a good name, and B. It’s the way Wynwood feels every year during Art Basel and this self published book by photographer Andrew Kaufman captures the excitement unpretentiously. Andrew Kau...
DEITCH Masters, Coney Art Walls Part 2 : Coney With a Twist
Just because you are a spectator in Coney Island Shepard Fairey doesn’t want you to be a spectator at civic responsibility. His newly wheat-pasted Coney Art Wall is fashioned as a graphically designed...
BSA Film Friday: 10.23.15
Our weekly focus on the moving image and art in the streets. And other oddities. Now screening : 1. 3 Minutes in Brooklyn 2. NUART at 15 on 2015 3. Vegan Flava: Arms Factory in Lisbon ...
Racing Character : Jim Avignon in Palestine, Greece, Italy, Germany, Peru
A constantly accelerating world is hard to document in a static mural, but Berlin’s Jim Avignon has been racing around the world to do it for quite a while. His bending neo-pop-comic illustration styl...
Brooklyn Street Art CA Fabien Castanier Gallery JonOne Studio City