Chris Invites You Up to His Crib Near the Park

Art on the streets of New York extends to the over 300 sculptures on the streets and in parks across the New York metropolitan area, a great outdoor public art museum that includes works from such great sculptors as Augustus Saint-Gaudens, Daniel Chester French and John Quincy Adams Ward. Cultural and historically significant figures (usually men) are chosen to be enlarged and elevated above the masses like Confucius, Joan of Arc, Benjamin Franklin, Ludwig van Beethoven, even Jackie Gleason. 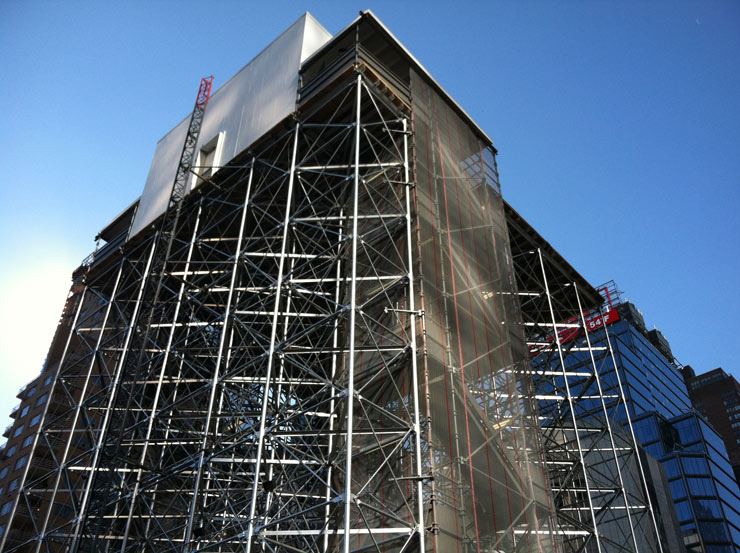 Right now you can get a good look at one sculpture that is usually six stories over your head with honking, speeding cars and trucks swirling around it 24 hours a day. The famous guy at the center of Columbus Circle is inviting you to hang out in his living room, and you won’t believe the views, bro. 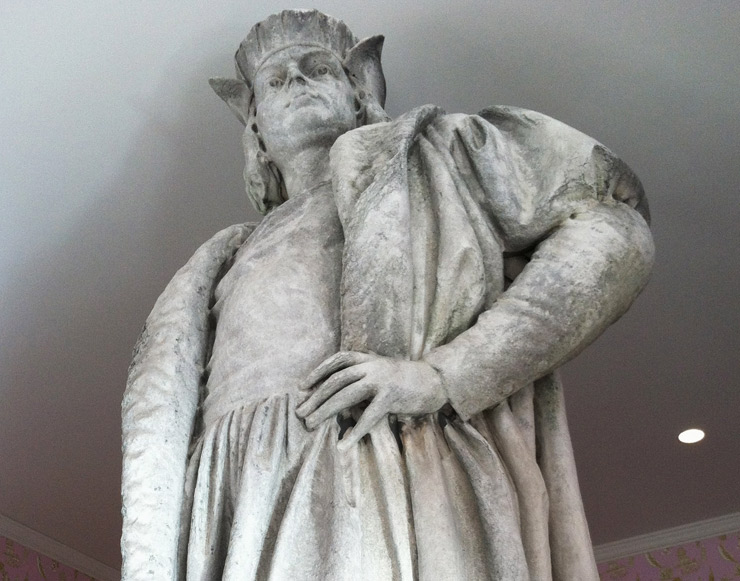 Part of a limited engagement, this project called “Discovering Columbus” by Japanese artist Tatzu Nishi enlivens a public art piece first erected in 1892 by Gaetano Russo. BSA guest contributor Cassandra Brinen stopped by Columbus’s penthouse and  tells us what it’s like to get up close with a 13-foot-high marble sculpture. Photos are by James Boo.

After ascending the six short flights (really it did seem short!) to reach the front door of what I will call Chris’ living room, we’re greeted by a volunteer who tells us that our time inside is allotted to 15 minutes. And please do not sit on the window seals.

We enter a short clean and modern hallway with hardwood floors and a large medium mirror on the right wall. The exit is in full view directly across from the entrance. As we walk to the center of the hall, it opens into the living room and the first glimpse of Columbus is from behind, in the middle of the room, surrounded by visitors. Oddly enough, he looks like he belongs there. This sculpture is what you could call a fitting “statement piece” for the modern New York apartment. 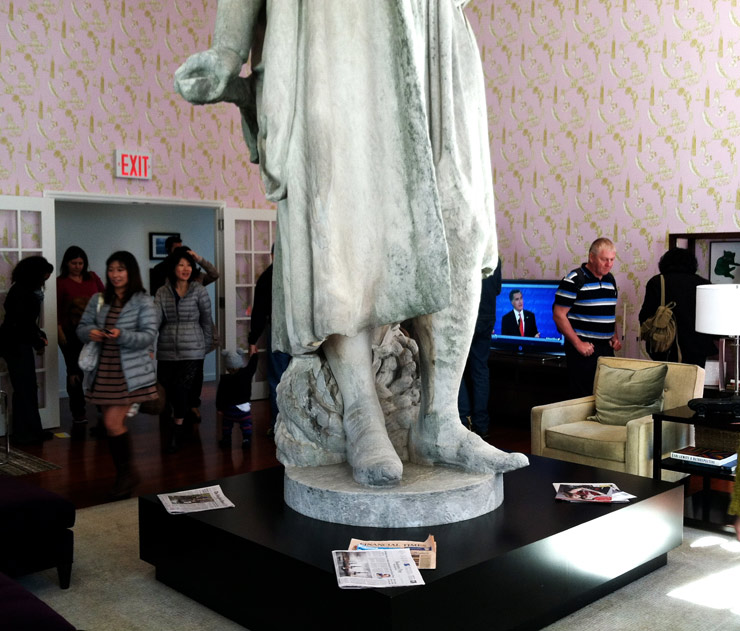 Almost as common as a column or a house plant, upon closer inspection and a front-facing view, this simple perspective is shattered. This piece of art was not meant for one apartment–it was meant for the vast New York public and was made to survive the years.

There’s no escaping Chris when you sit on the comfortable couches that flank him from three sides. Attempting to look at the furniture or people taking pictures requires a head (or full body) tilt. This is his house. He has lived here since before you were born and he will be here long after you leave. And he has good taste! The faded pink Americana wallpaper designed by the installations artist Tatzu Nishi, with illustrations of the Empire state building, Elvis, and hotdogs, creates a beautiful backdrop for the modern apartment furnishings and serves as a playful contrast to Columbus’ weathered exterior.

A detailed examination of that exterior shows wear and tear on the granite that calls out his daily existence. Questions arise; How did he get the tiny heart-shaped hole on his lower left cloak? How long did it take for whole chunks to fall off his leg? How is it possible that these are his only imperfections after he has lived here since the early 20th century? Only he knows and even though we are invited into his house, I don’t think he’s giving up his secrets anytime soon. 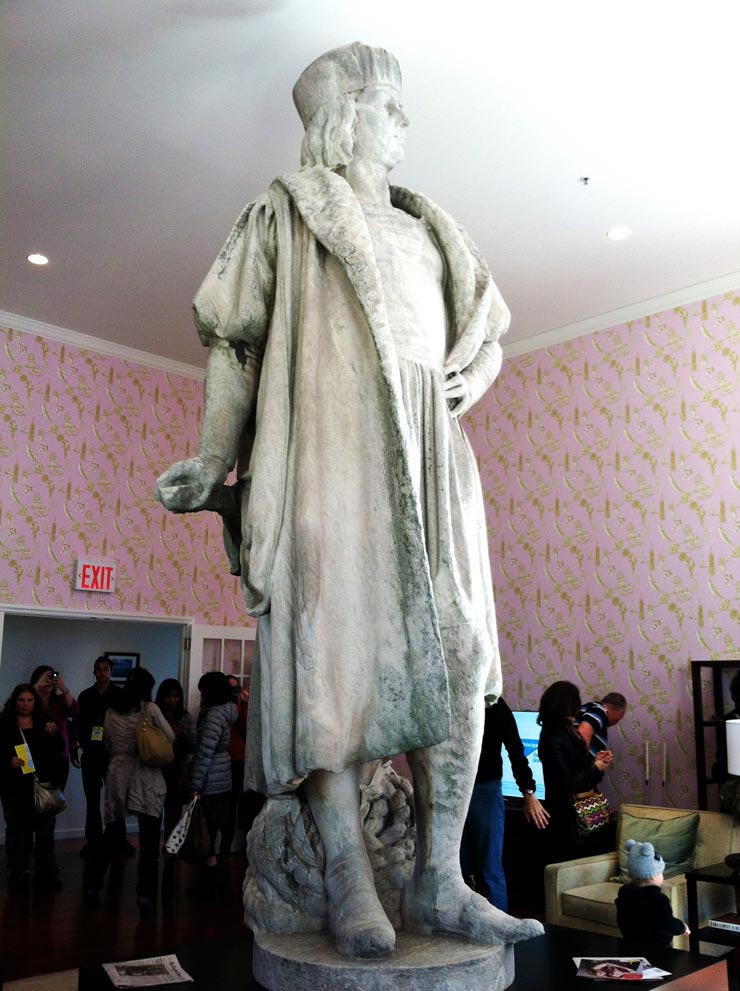 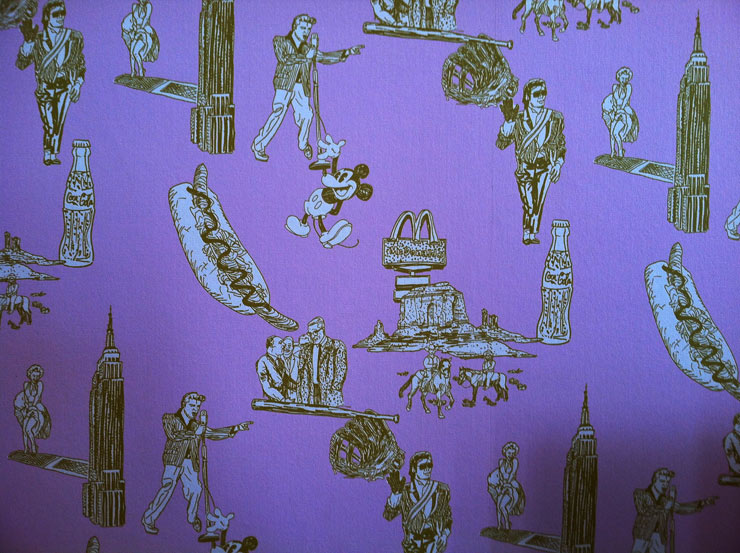 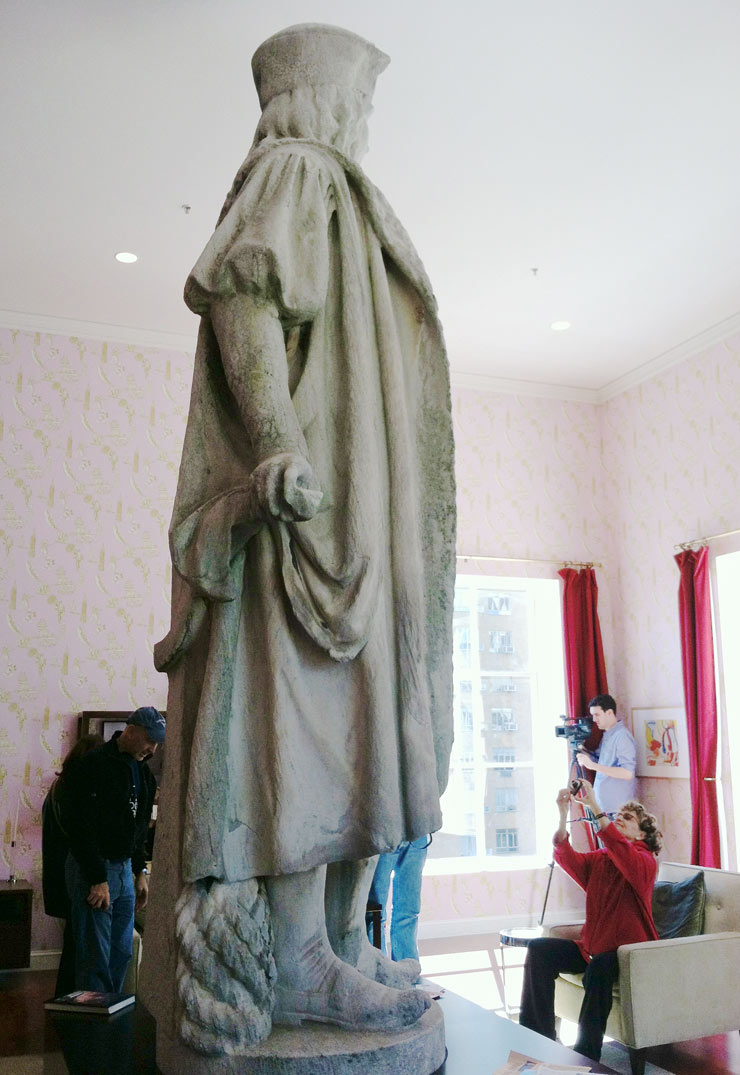 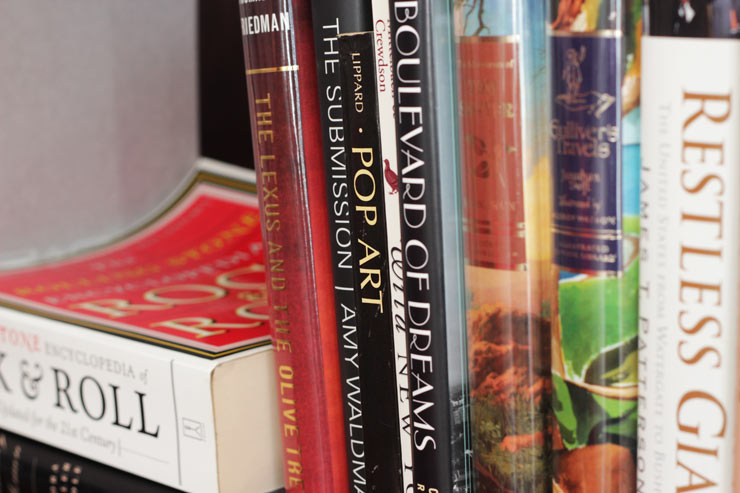 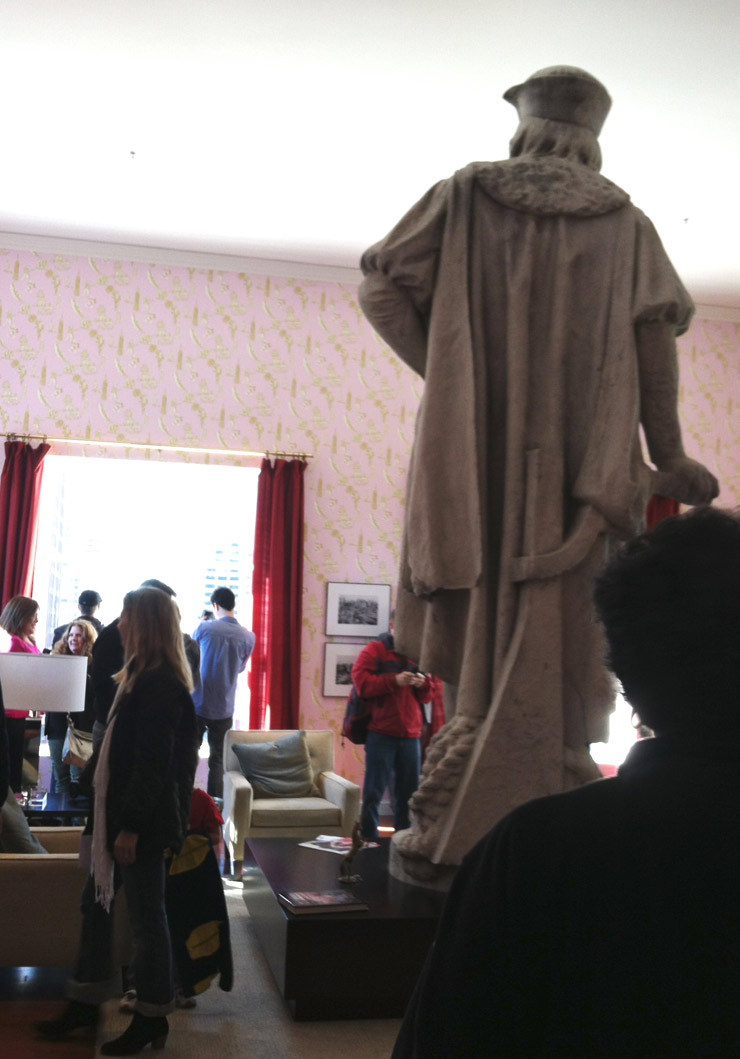 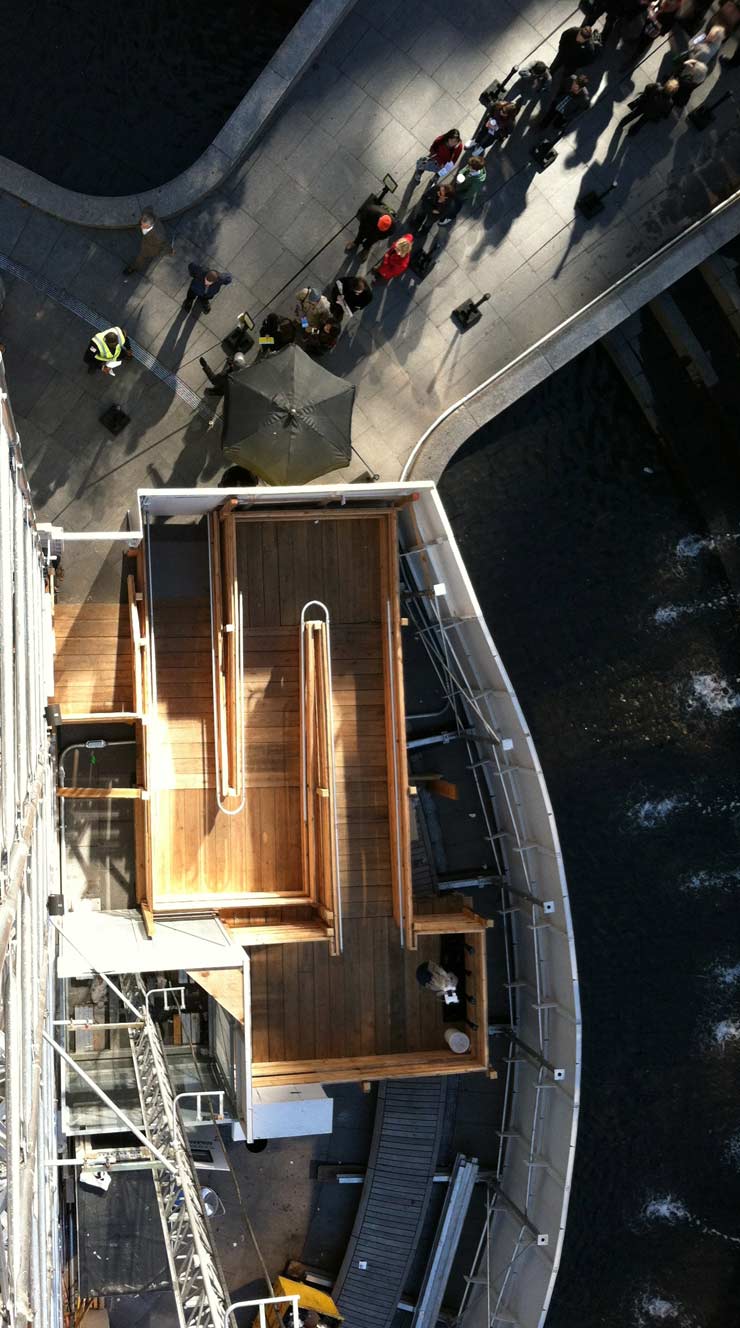 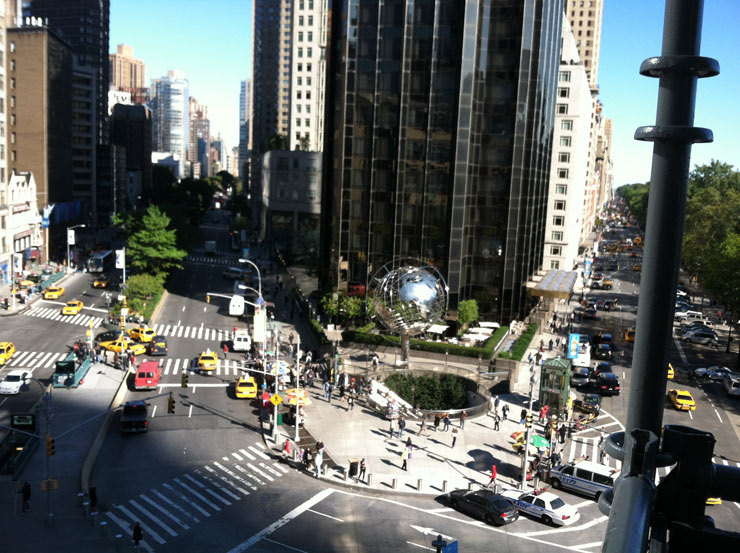 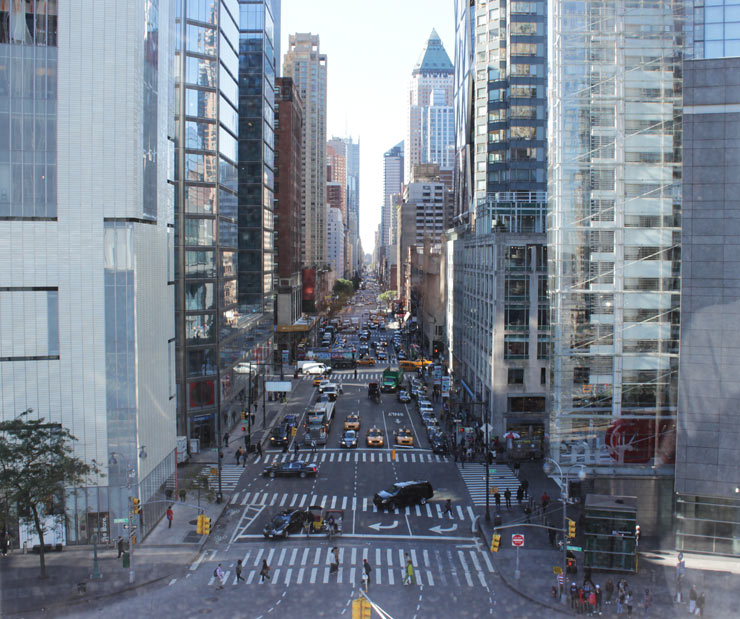 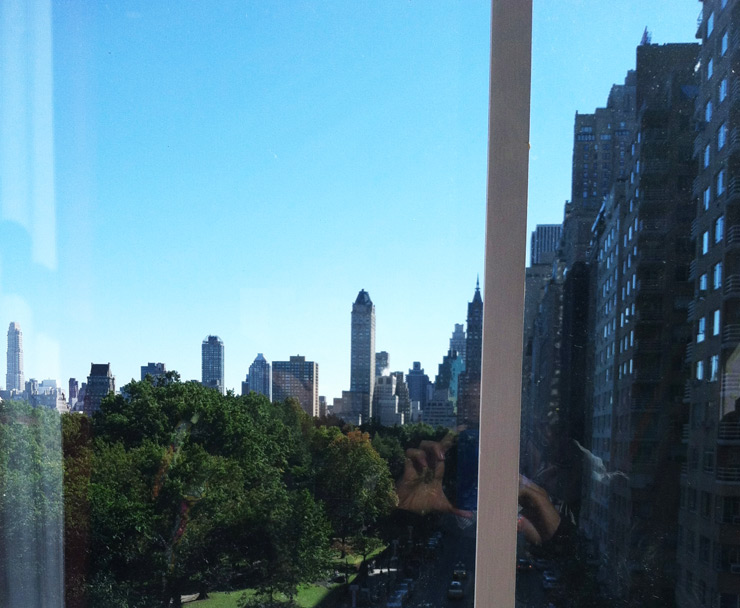 Special thanks to Cassandra Brinen and James Boo for their contributions!

Overunder: Key In Search Of A Home
Heading out to Nevada today to check out a mural on the plains that honors a cattle rancher and a freight-jumping graff legend cowboy as well. You may not think they have much in common but have you e...
BSA Images Of The Week: 02.22.15
Here's our weekly interview with the street, this week featuring Ador, Antonie Trouve, Brain Alfred, Clint Mario, Daco, Delphine Carre, Dran, EZK, Hiss, Icy & Sot, M Chat, ME, Meer Sau, Phil...
Roland Henry and Shark Toof : 15 For 2015
What are you celebrating this season? We’re celebrating BSA readers and fans with a holiday assorted chocolate box of 15 of the smartest and tastiest people we know. Each day until the new yea...
Jeremy Fish and "Happily Ever After"
If you missed his show this month with Jonathan Levine, you can comfort yourself with a copy of his book Happily Ever After, which gets you promptly inside the head the storytelling Jeremy Fish. Je...
Anna Taratiel and The Maps Inside of You
Geometric and organic compliment one another here in "Perspectivas y Vacíos" (Perspectives and Gaps) in this new public art by Anna Tartiel in the Centre Cívic Cotxeres Borrell in the center of Barce...
Brooklyn Street Art Cassandra Brinen Christopher Columbus Columbus Circle Jaime Rojo James Boo Manhattan NYC Public Art Fund Rediscovering Columbus Steven P. Harrington Tatzu Nishi