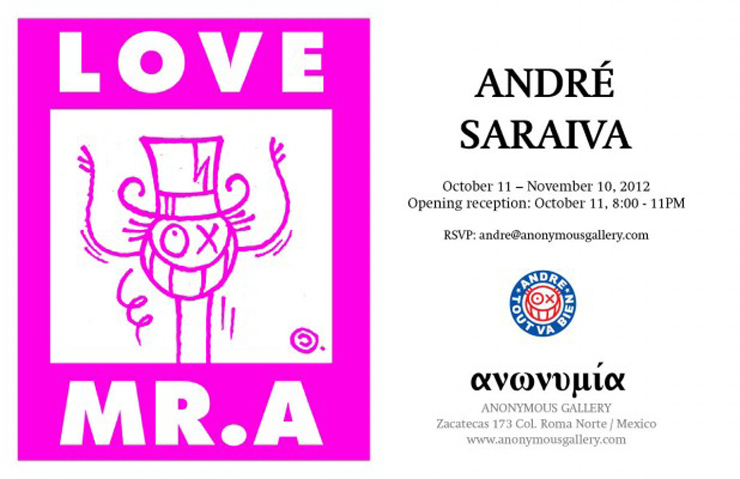 ANDRÉ SARAIVA
SOLO PROJECT
October 11 – November 10, 2012
Opening reception: October 11, 8-11 PM
MEXICO CITY:
173 Zacatecas
Col. Roma Norte, Cuauhtémoc
Ciudad de México, Mexico 06700
____________________________________________________
“Graffiti is not vandalism but a beautiful crime”
Monsieur A is known by his distinctive figures –  long lined characters with disturbing yet charismatic smiles. This Atelier de Production et de Création, develops precise execution in his deceptively naive contours or childish lines that depict more than we see.
Andre’s recognizable geography, cursive and dynamic hand style transforms his life into an oeuvre that carries his aesthetic values and fuses with his own stylistic criteria in a perfect constellation of art and fashion. Within the variable contexts, André oversize’s graffiti production to personalize spaces while constructing landscapes of identity and recognition. André could be described in Baudillard’s words “ingenious publicity in which each person becomes the impresario of his own existence”.
André Saraiva, has expanded the definition of art as itself, while re-defining “what an artist can do” – his new extended worlds manifest in production, process and exhibition. With this playful manifestation, André will take over the newly renovated project space of Anonymous Gallery, Mexico City. The space will surround the artist with his works on paper while this cross-cultural phenomena paints live in front of a viewing audience on the night of
October 11th.
ABOUT THE ARTIST:
André Saraiva, also known as Monsieur André or Monsieur A, is a French graffiti artist. Born as son of Portuguese parents in Uppsala, Sweden, he has been living in Paris since his childhood. Saraiva started doing graffiti in 1985, quickly acquiring notoriety in the late 90s with Mr. A, a cartoonish character with a top hat, big smile, long legs, and a cross and circle for his eyes that could be found all over the streets of Paris. A famous member of the early Parisian graffiti scene alongside Invader and Zevs, he also made an appearance in Banksy’s street art movie ‘Exit through the Giftshop’. Thanks to his distinctive poetic and joyful style and his use of pink colour, he became instantly recognizable – for example in his Love Graffiti series, which he created in the year 2000 – and expanded into various techniques such as wall paintings and sculpture from there. Even installations now count to his repertoire as seen in ‘Art in the Streets’, recently on display at the MOCA in Los Angeles that was curated by Jeffrey Deitch and Aaron Rose.

Grumpy Elf: Lapiz in Hamburg Says "Go Shopping!"
Are you finding it challenging to get excited about Christmas this year? Santa says “Go Shopping”! Lapiz says, "Alles für das BIP" or "All is for the GDP (Gross Domestic Product)" Lapiz. AllHai...
Meet Us in Artwork Alley; Artists Bring New Life to Downtown Salinas, Kansas
Hannah Scott & Tim Stone. Artwork Alley - Salina Arts and Humanities in collaboration with The Salina Kanvas Project. Salina, Kansas. (photo © Tanner Colvin) Those organic, often narrow and win...
BSA Film Friday: 10.29.21
Our weekly focus on the moving image and art in the streets. And other oddities. Now screening:1. Shepard Fairey Talks About New Collaboration with Martha Cooper During Studio Visit via New De...
BSA Images Of The Week: 08.09.20
Welcome to BSA Images of the Week. If you are not seeing opinions and theories being expressed on social media or raging cable, you can always go to the streets today, as the voice of the peo...
Canemorto (Dead Dog) Across Italy
Gutteral grunts of smeared color across lumpen or attenuated limbs akimbo, eye balls bulging and staring with body language and gestures happily inclusive, the Canemorto trio are grotesquely entertain...
ANDRÉ SARAIVA Anonymous Gallery Brooklyn Street Art Mexico Mexico City