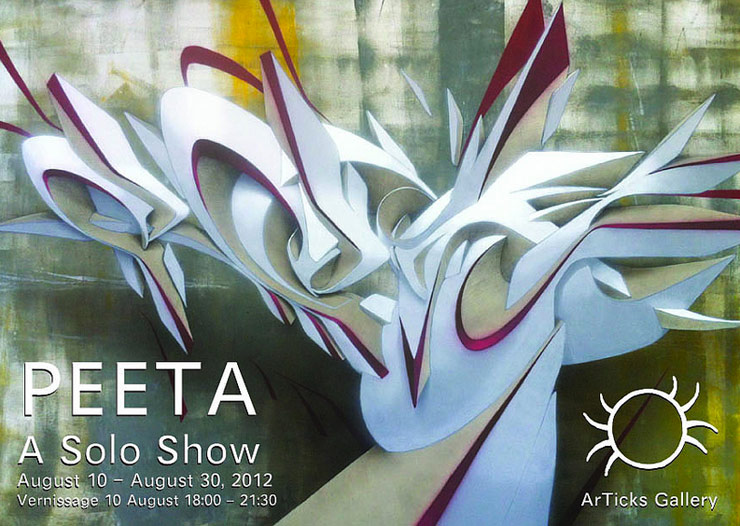 ArTicks Gallery is pleased to announce PEETA – A SOLO SHOW, a solo exhibition consisting of new paintings and sculptures by the Italian artist Peeta.

Peeta endeavours to realize the sculptural quality of individual letters, namely the ones that spell out his own name. Being aware of the Greco-Latin origins of today’s modern alphabet which give it a certain abstract, rather than figural, quality, his task departs from this graphical history to follow the formal methods of Chinese and Islamic calligraphy. With his works, the artist always selects the specific letters “P-E-E-T-A” and breaks them from their generic typographical form, stylizing them with shape and volume beyond their mere semantic function. Thus his lettering is brought into the fluidity of the urban, where words are continuously ruptured from their own histories, readapted into idiom and gestures learned from the street.

And it is this urban terrain that Peeta is always drawn to: street walls, trains, abandoned factories. In a way, his work is record of evolving inscription—not in its traditional sense, but in terms of a fluency acquired through the urban vernacular. Peeta calls this a “geometry of writing”, where the rules are changeable and words are modified, deconstructed and regenerated as they intersect with convention and the new.

Peeta, also known as Manuel Di Rita, has been active as a graffiti artist since 1993 and is currently living in Venice. He is a member of the EAD crew (Padova, Italy), FX and RWK crews (New York City) and has participated in graffiti jams and Meeting of Styles events in Europe and the Americas. His work explores the potential of sculptural lettering, both in painting and in three dimensions. Peeta has exhibited at the Santorini Biennale (2012); Megastore Gallery – The Hague (2007); Magazzini del Sale – Venice (2007-2008); Edgeart Gallery – Manchester (2008); PrettyPortal Gallery – Düsseldorf (2009); Baron Gallery and Ayden Gallery – Vancouver (2010-2011); Da Baker Gallery – New York (2010); and H+ Gallery – Lyon (2011), among many others.

Portraiture by Case Maclaim and Helen Bur in Madrid for Urvanity 2021
Frankfurt-based ultra-talent Case Maclaim is with the Urvanity Art Fair this week, and he has created a new mural in Madrid's old, historical city center. His work is being shown by Brussells Ruby Ga...
Icy & Sot "Let Her Be Free" Book Launch|Art Exhibition (Manhattan, NYC)
"We first met Icy and Sot the summer they arrived in New York. Their name was already preceding them on the Internet because even while still in Iran, they had developed a network of friends and colle...
Said Dokins in Queensland: Ghosts, Memories & Language
“This history represents the aboriginal ghostly inscription that circulates between the past and the present, says Mexican Street Artist and muralist Said Dokins as he describes his two new murals in ...
BSA Film Friday: 01.02.15
Our weekly focus on the moving image and art in the streets. And other oddities. Now screening : 1. Urban Forms 2014 in Łódź, Poland 2. Memorie Urbane 2014 3. Alice Pasquini: New Journey ...
Fanakapan Bubble Letters Flying High in Bushwick, BK
The UK’s Fanakapan popped by Brooklyn for some balloon lettered mural painting recently, something he has been doing for about five years — when not painting cakes, sweets, and phallic shaped balloon ...
Amsterdam ArTicks Gallery Brooklyn Street Art peeta The Netherlands