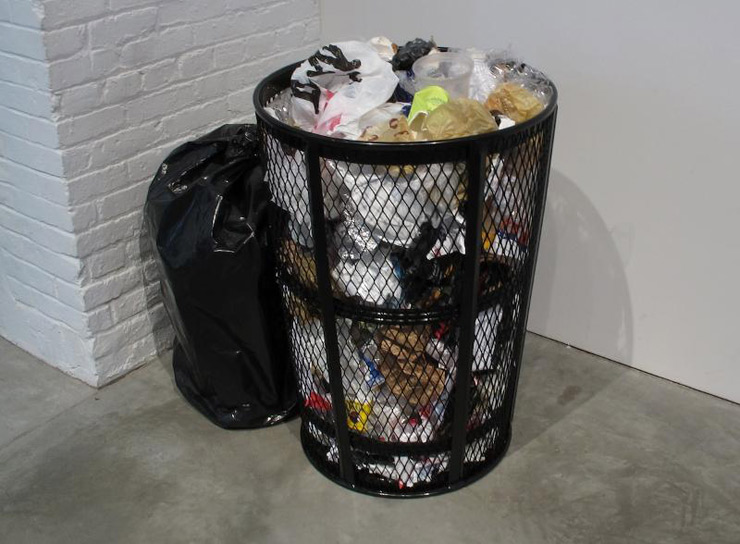 Drawing upon a formative childhood in a musical household, David Ellis composes syncopated rhythms, playful scores, and intricate beats with the most homespun of resources. Trash bags, empty paint pans, and crumpled papers shudder, crunch, and rustle in a meticulously programmed arrangement that emulates Ellis’ fondness for the authenticity of hip hop and improvisation of jazz. Showcasing his belief in the musical “flow” present in all aspects of daily life, 2011’s “Busted Plume” (previously exhibited at the Museum of Contemporary Art, San Diego) stages an audible but unassuming performance born of painstakingly placed springs, wires, and solenoids within a standard municipal trash can. Similarly, Ellis’ large-scale paintings feature the reoccurring presence of uninhibited motion as black swaths of paint bob and weave their way through an amalgamation of quotidian images, objects, and colors; elegantly forging a cadence analogous to the artist’s aural compositions. Kris Kuksi, featured in the Project Room, is also heralded for his scrupulous craftsmanship. Rife with the chaos of man’s struggle for survival and power, Kuksi’s sculptural wall works portray apocalyptic dioramas. Elaborate scenes of industrial-meets-Old-World pandemonium present miniature soldiers, skeletons, animals, factories, and military structures wreaking havoc in otherworldly ruins. Ornate in his depiction of “the fallacies of Man,” Kuksi’s three-dimensional works are not simply replicas of fantasy, but rather shape a macabre likeness to our ultimately futile quest for accumulation.

BSA Film Friday 05.01.15
Our weekly focus on the moving image and art in the streets. And other oddities. Now screening : 1. Richmond Mural Program 2014 2. Black ANZAC: Time Lapse of WW1 Soldier Wall 3. Adnate, Aske...
BSA LIVE with FAILE at Brooklyn Museum Today - Live Streaming 7pm EST
Join Steven P. Harrington and Jaime Rojo, co-founders of BrooklynStreetArt.com In Conversation with Patrick Miller and Patrick McNeil of FAILE today at the Brooklyn Museum. The event will be modera...
Photos Of BSA 2021: #10: Into the Fog
We’re celebrating the end of one year and the beginning of the next by thanking BSA Readers, Friends, and Family for your support in 2021. We have selected some of our favorite shots from the yea...
Josep Fernandez Margalef x Rice Create Connection: "Esperança" (Hope) in Barcelona
Today we go to Barcelona in Spain, where the country held a memorial ceremony July 16 to honor more than 28,000 people who have died there from COVID-19. This new mural contemplates what it means to ...
BSA Images Of The Week: 09.13.15
This Sunday's Images Of The Week seems to have an overriding theme which wasn't really planned. It just happened. A preponderance of stencils, many of them miniature and most placed without permi...
Brooklyn Street Art CA Culver City David Ellis Joshua Liner Gallery Kris Kuksi Mark Moore Gallery