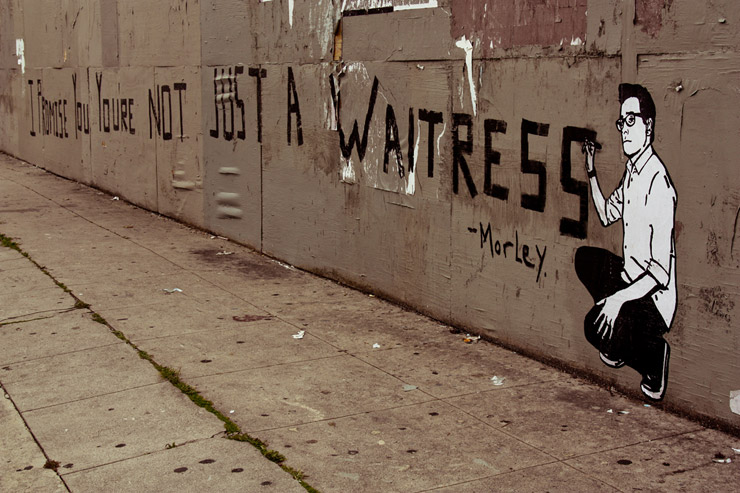 This July The Outsiders Newcastle will host the first ever solo exhibition by distinctive Los Angeles street artist Morley, ‘I Don’t Make Sense Without You’.

A “dreamer” originally from the quiet US state of Iowa, Morley began vandalising while at college in New York. “It wasn’t until I moved to New York that I got my first taste of street art,” he says. “While I was familiar with traditional graffiti, deep down I think I felt like a middle class white kid from the Iowa wouldn’t be able to muster the street cred needed to appreciate it. Street art seemed a bit more inclusive, had fewer established rules and aimed its messages at a more mainstream audience. Finding myself surrounded daily by a sea of anonymous strangers, each seeming to carry their own unique burden, left me with a desire to communicate some sort of message of hope. I started silk screening what I would later identify as ‘slogans’ onto Contact paper and sticking them around subway stations.

“Moving to Los Angeles made my mission a little more personal. Like most college graduates, I found myself confronted by the harsh reality that perhaps the future I had planned for myself wouldn’t stick to the blueprints.

“Los Angeles has an interesting populace. Dreamers, waiting patiently for their big break mingle with struggling immigrants, directionless children of privilege, and those too burnt out to remember why they moved out here in the first place. For me, the difference between LA and New York was that now I was truly one of them, not just observing from behind the protective shield of higher education.

“I also began including drawings of me because I wanted my audience to know who it was that was writing to them. Rather than a disembodied voice, I wanted them to see the words as coming from a kindred spirit and a comrade in arms. It took a while for me to convince myself that my words might have value as street art. Later I discovered that it was precisely what I was insecure about that set me apart from other artists. At first, black and white words on a page seemed too simple to be of any real value to anyone. What I had forgotten was that from a car driving 30 miles-an-hour down a city street, it’s difficult to retain much else.”

Post-postmodernism for the people, Morley’s work is touching, empowering and very refreshing. ‘I Don’t Make Sense Without You’ is the feel good show of the Summer.

LA in Berlin, Urban Nation Unveils Project M/4
Urban Nation in Berlin bellows quietly again as it partners with Andrew Hosner of Thinkspace in LA for an eclectic Project M/4 installation and group show. Dabs & Myla on the facade. Project M/...
BSA Images Of The Week: 10.02.16 : Spotlight on Climate Change
Faile. Detail. The Greenest Point Project. Greenpoint, Brooklyn. NYC. (photo © Jaime Rojo) He loves me, he loves me not. He loves me, he tells me I'm an idiot because I trust scientists about cli...
Luna Park's "(Un)Sanctioned" Book - Our Interview & This Weekend's Launch
When we invited Luna Park to the Brooklyn Museum to be onstage with us and Swoon (Callie Curry) a few years ago, she told us she was a bit nervous because of the size of the audience, but really she w...
BSA Images Of The Week: 02.05.17
It's surreal to be on the south side of the US border when Trump has just signed an executive order to build a wall, decides to try to pick a fight with the President of Mexico and drops a travel ...
Turbulent Waters In The Black Sea From Jake Aikman in Kiev
“Getting a feel for dramatically upscaling my process,” says London born Jake Aikman as he brings a foreboding and riling image of the Black Sea to Kiev in the Ukraine. Primarily a studio painter back...
Brooklyn Street Art Morley Newcastle upon Tyne The Outsiders Gallery