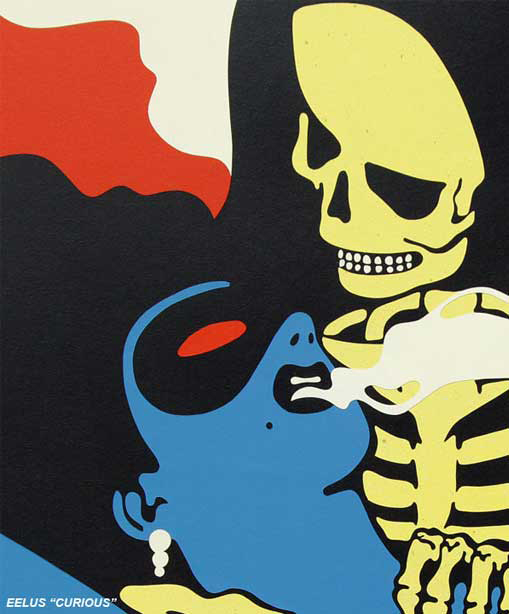 Curious – A new exhibit by Eelus.
Eelus lives in a very different world to most people; a world that is crawling with hidden magic and strange creatures. There are dinosaurs and strange beasts within the center of the Earth, Bigfoot is alive and well within the forests of many lands and the skies are full of beings from other worlds. There are gnomes in the mountains, secret bunkers in the desert, and always, ALWAYS monsters under the bed.

From within this world Eelus has carved a name for himself over the last ten years as one of the UK’s top graphic artists. He’s painted and exhibited around the world alongside some of the best contemporary and urban masters such as Banksy, D*Face, Eine, Tim Biskup and Shepard Fairey as well as having a number of highly successful solo shows in the U.K and U.S.

The curiosity cabinets of the 16th century onward were the starting point for Eelus’s inspiration for ‘Curious’. Within these strange collections you would find fantastic specimens from the natural world, fascinating studies on the human body, paintings and pictures from around the globe and even objects of great mystery and wonder that can’t be explained by science at all. For the first time in his artistic career, Eelus has moved away from his trademark medium of stencils to create a brand new body of work made entirely from hand cut paper, all of which fall within the categories usually found inside the cabinets of wonder.

Through ‘Curious’, Eelus is introducing us to the start of not only a new medium for him, but a new visual style. The fun he’s had making the work is obvious, he just hopes you enjoy it as much as he does.

Join us on June 1st starting at 6pm for the unveiling of Curious .

Free and open to the public
Artist will be in attendance

"Surface" Brings 6 New Murals to Copenhagen
New images of epic murals in Copenhagen today from Conor Harrington (UK), ROA (Belgium), Borondo (Spain), DALeast (China), Maya Hayuk (US) and HuskMitNavn (DK) on the occasion of the release of ...
A Preview Of "Mapping The City" at Somerset House (LONDON)
Until you get lost in a city, you really do not know its true nature. And possibly your own. Only at the moment of realization that you really have lost your way, your bearings, your inner compass, h...
Finishing Pieces in Rochester for Wall Therapy 2017: Dispatch 3
With a theme of "Art and Activism", the 2017 edition of Wall\Therapy is happening mid-summer in Rochester with local and national artists coming to complete murals that keep people in mind. More o...
“Castleman Tour” Leaves the Station, Hitting Madrid, Barcelona, Valencia, more
Official kick-of for release of the book "Get up again: Forty years later" by Craig Castleman Nearly Forty years after his seminal book “Getting Up: Subway Graffiti In New York” was released, ...
Djalouz “Peace in the World” in Paris
Graffiti artist Djalouz’s wildstyle 3-D shards look like multi-tentacled sea monsters climbing up walls, wrapping around telephone booths, creeping down stairwells and spreading across floors. By them...
Black Book Gallery Brooklyn Street Art CO Denver Eelus