The streets are alive again with all manner of styles from wheat-pastes to stencils, painting, murals, weaving, sticking, slapping, pop appropriation, comic parody, memorial outpouring, collectivism, mavericks, fantasy, pattern, geometry, photography, and yes, beef! Call it what you like, it looks like art is in the streets. 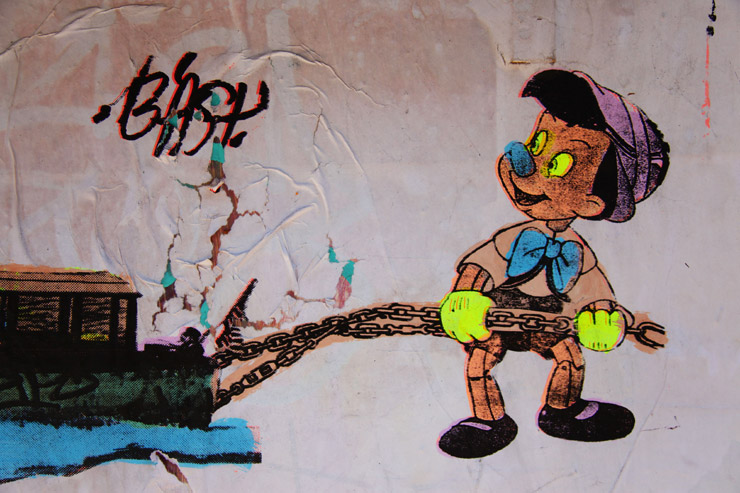 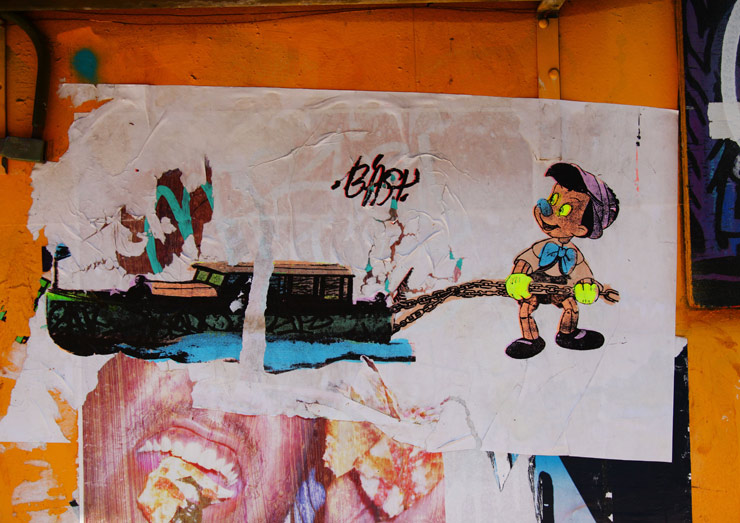 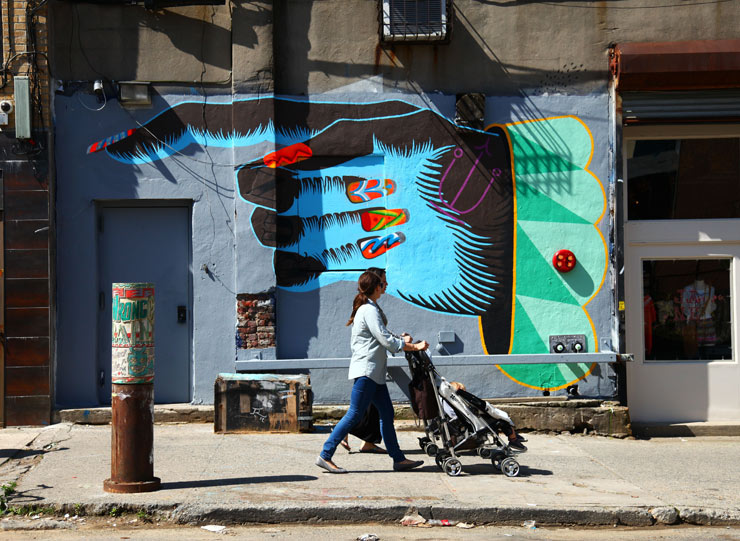 Ben Wolf and Heidi Tullmann. This is a work in progress and we’ll have more on this installation later in the week. Also, a Faile prayer wheel is in the foreground. (photo © Jaime Rojo) 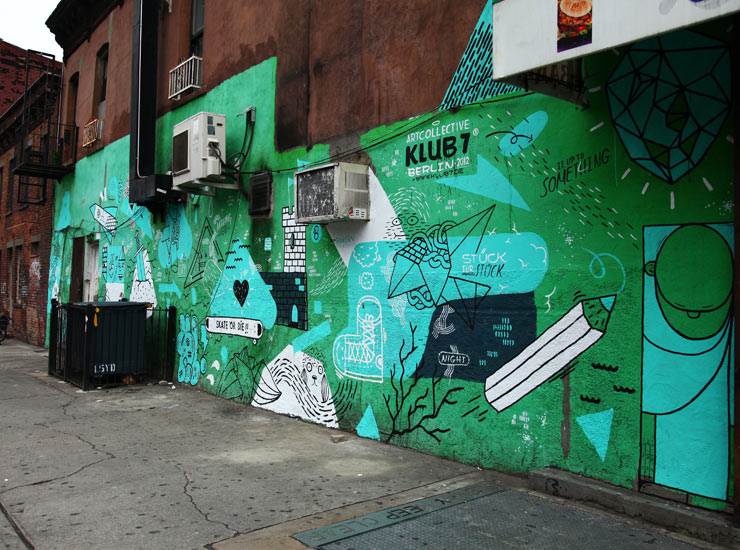 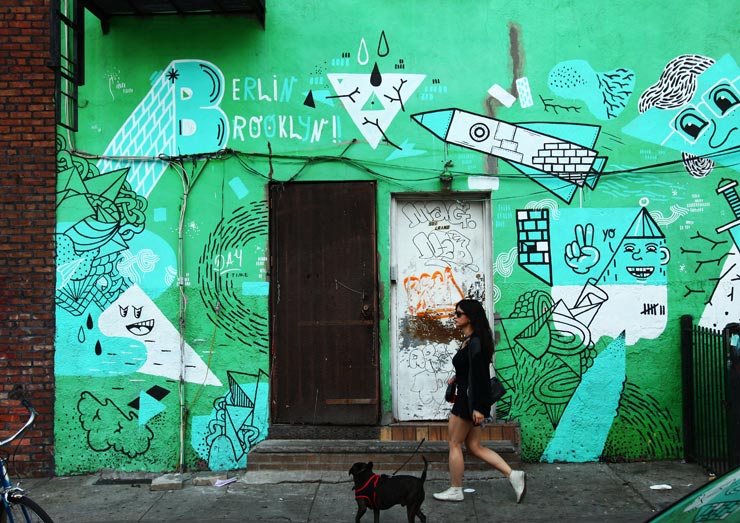 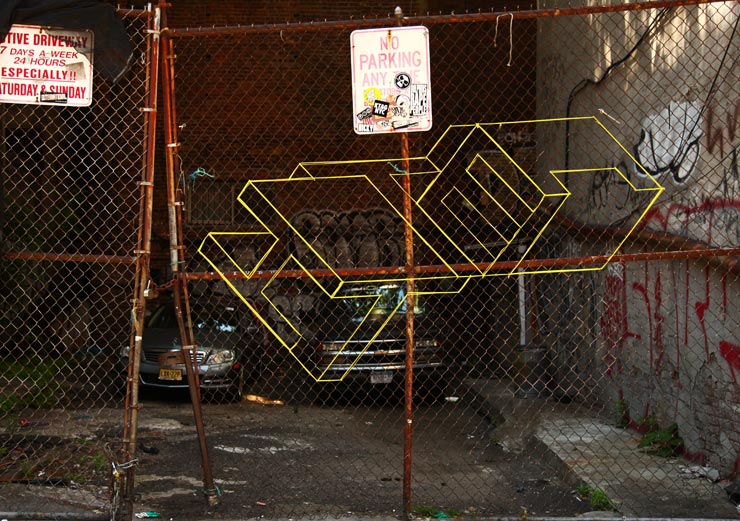 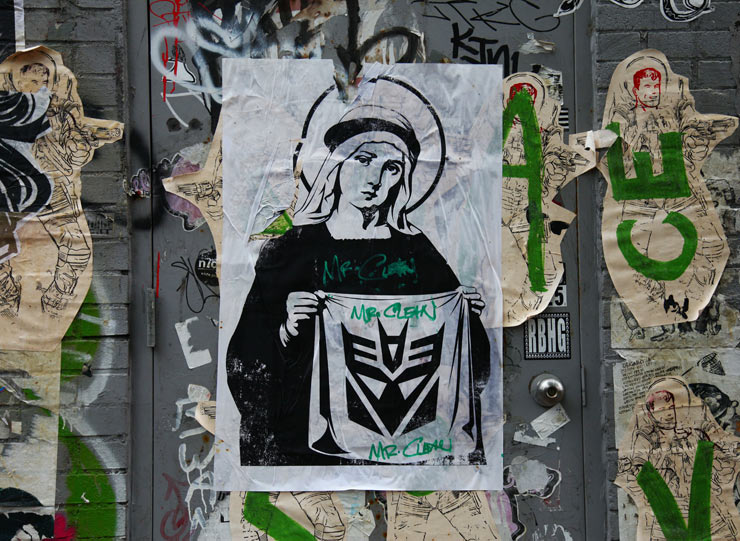 Mr. Clean. Mary is such a good spokesperson isn’t she? (photo © Jaime Rojo) 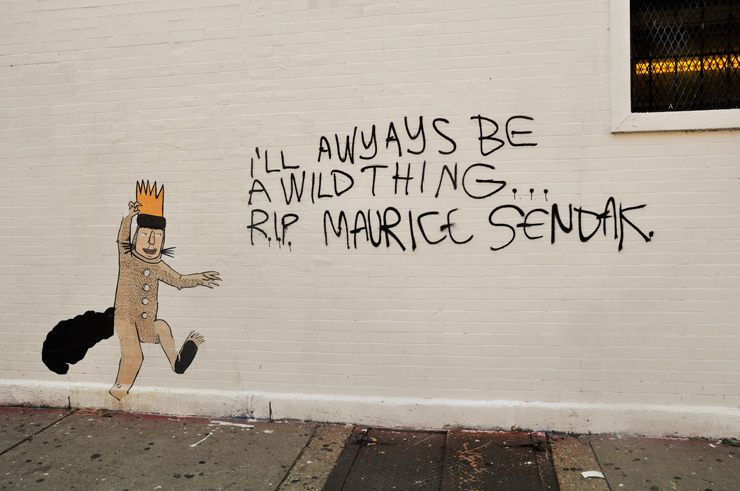 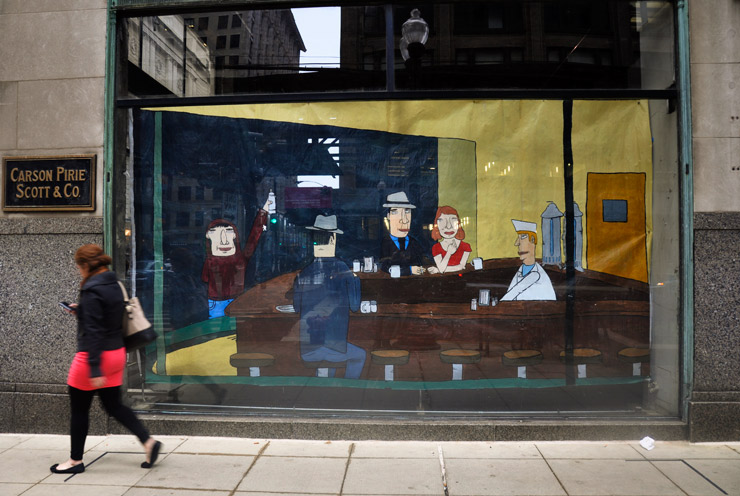 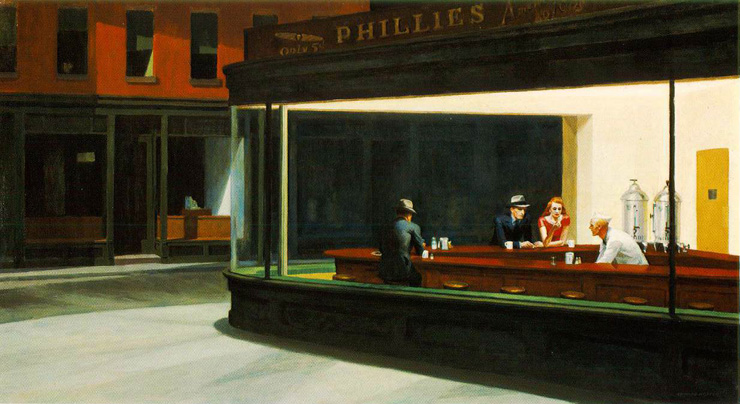 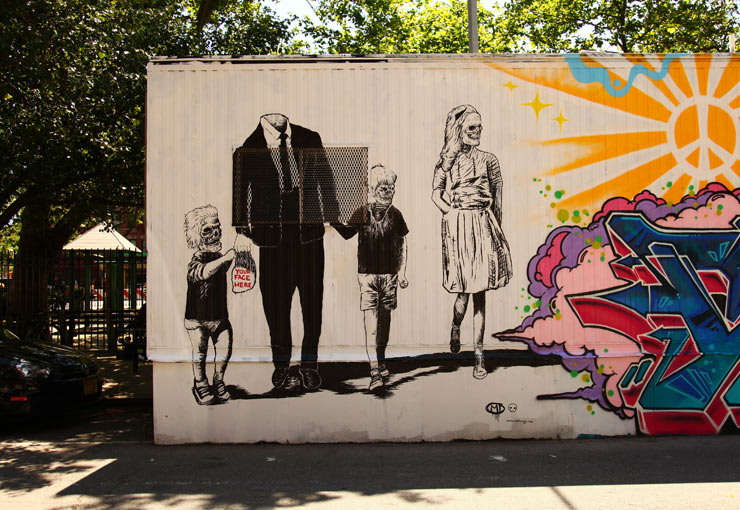 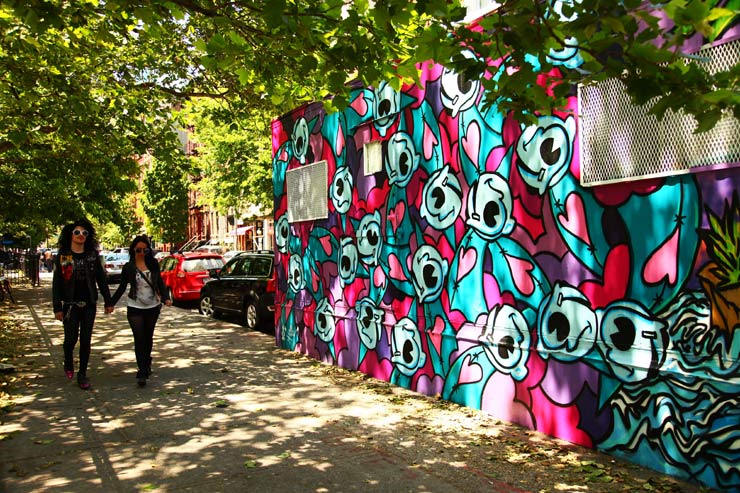 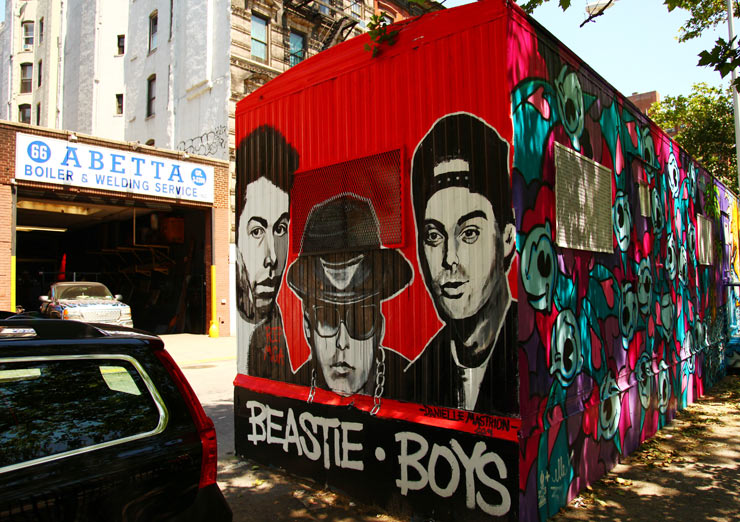 There have been a number of great tributes on the street to the Beastie Boys in reference to the painful loss of Brooklyn’s MCA on May 4th. This one is by Danielle Mastrion. If you’d like to send us others, maybe we can collect them all into one posting. (photo © Jaime Rojo) 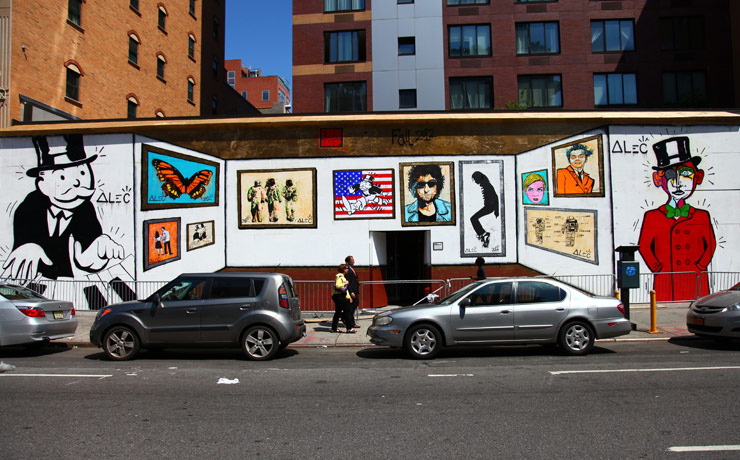 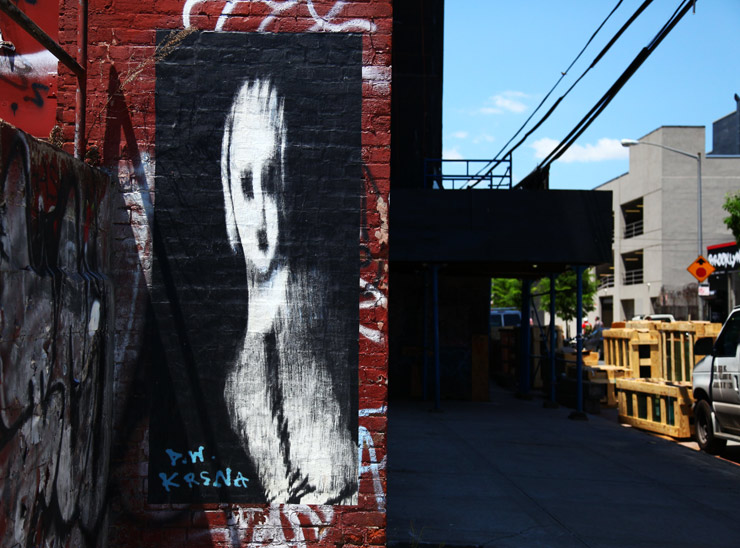 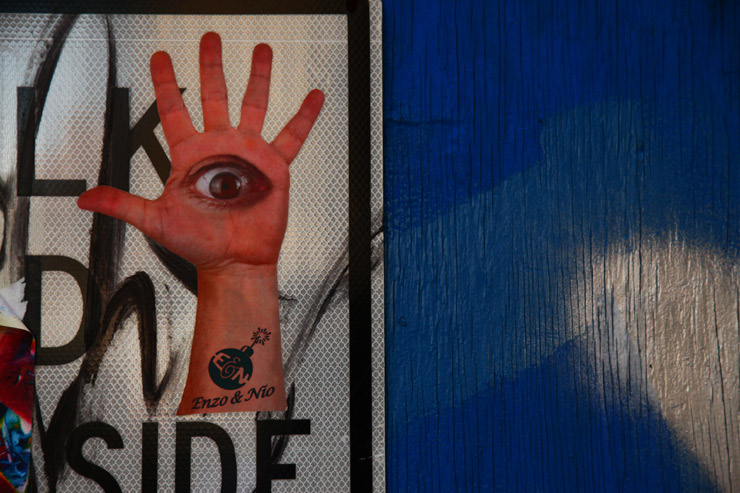 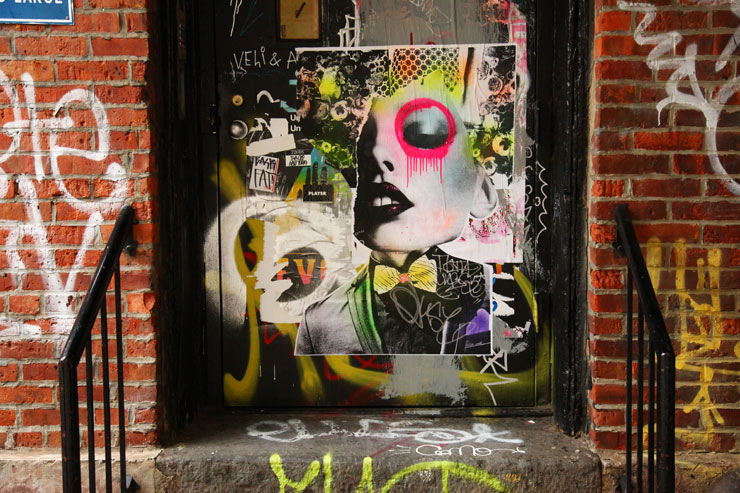 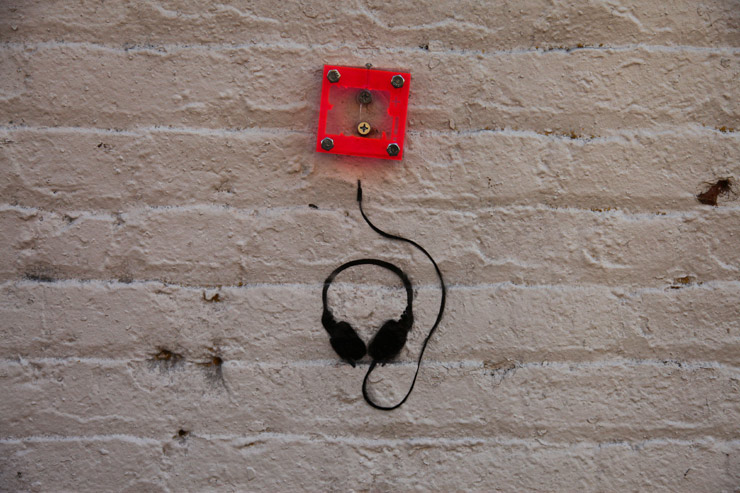 The acrylic box screwed onto the wall was originally an audio device for people to plug in their own earphones and learn more about Jason Woodside’s mural (shown here on last week BSA Images of the Week) in collaboration with the New Museum project titled CNNCTD+100. The box was partially destroyed and an unknown artist stenciled the earphones later.  (photo © Jaime Rojo) 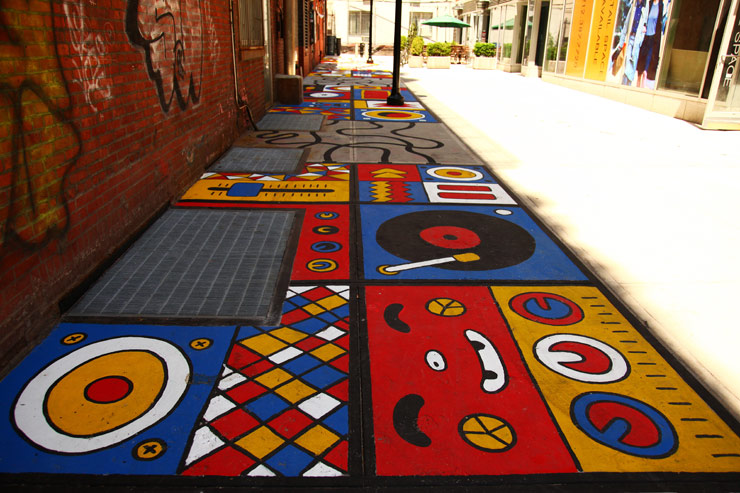 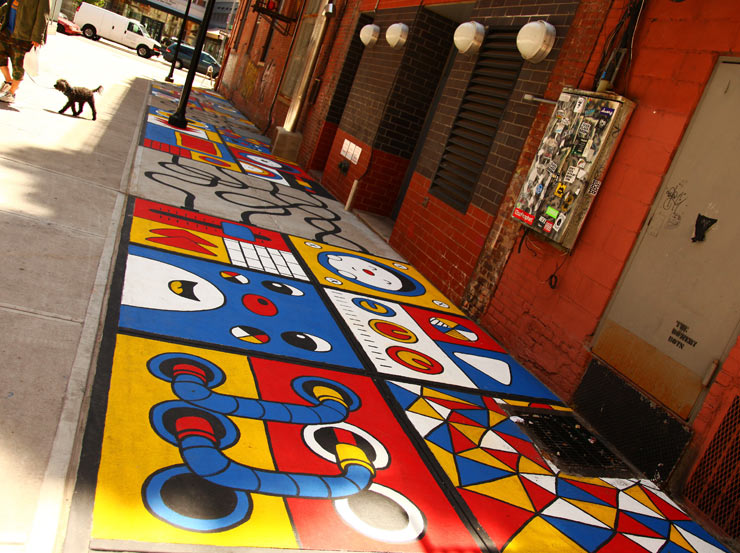 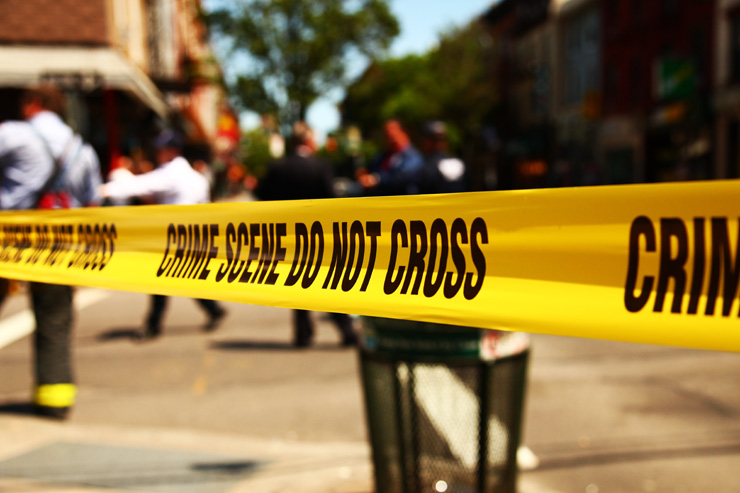 "Writing The Future": Basquiat , Broken Poetics, and the NYC Cultural Context
To accompany the exhibition “Writing the Future: Basquiat and the Hip-Hop Generation” at the Museum of Fine Arts in Boston, a substantial catalogue has been released to support the show and place the...
Nuart Day 5: Flying High in the Norwegian Sky
Live from Nuart as it’s happening folks, and the festival is proving to be a rather impressive small beast at this point - one with multiple heads and legs and hands waving paint brushes, aerosol ca...
Labrona and DB on the Road, Dispatch From Portugal
“I didn’t get invited to paint anywhere this winter so I made my own street art trip,” says Labrona of his new wheat-pastes in Portugal. “It’s sort of a throw back to before mural festivals, when we j...
Little Ricky Takes Ewe to the Streets of NYC with Anna, Keith and SHEEP
Little Ricky thinks Anna Wintour is someone important whom people consider significant or iconic in popular culture, which is already a humorous supposition. In his multiple street iterations of the ...
Mid-Summer Discovery: Burgeoning Magnet Wall in Manhattan Boasts Bounty
We like findings spots that feature walls slammed with street art in a most organic way, the aesthetic signature of a current ecosystem mid-evolution. These spots are often a magnet for street artist...
Alec Monopoly Bast Beatie Boys BEN WOLF Bishop 203 Brooklyn Brooklyn Street Art Chicago Dain Danielle Mastrion Don't Fret Enzo & Nio FABnyc Heidi Tullmann Hot Tea Jaime Rojo Jason Woodside Keith Schweitzer Klub7 KRSNA Manhattan MaNY Project Michael DeNicola Mr. Clean NYC Sonni Steven P. Harrington