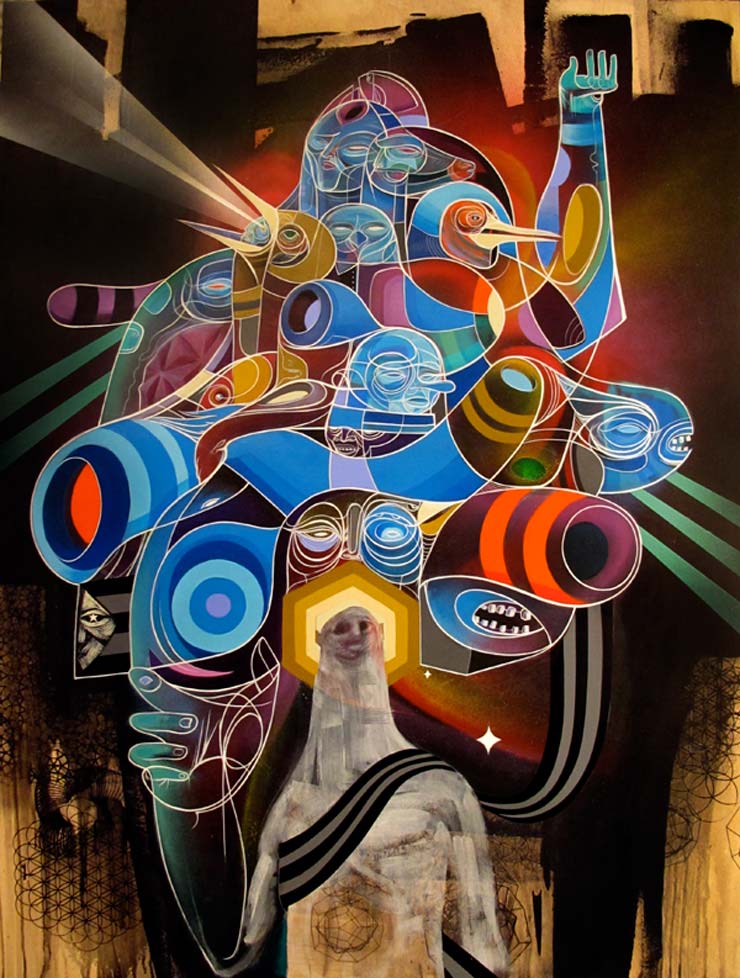 May 19—June 16, 2012
Opening Reception:
Saturday, May 19, 7—9pm
NEW YORK, NY (April 3, 2012) — Jonathan LeVine Gallery is pleased to present Luminosity in the Dark Rift, a series of mixed media works on canvas, panel and paper by New York-born, Northern California-based artist Doze Green, in what will be his fourth solo exhibition at the gallery.

Green describes his work as “a fusion of universal law and ethereal dreams.” His kinetic imagery conveys ever-changing narratives with infinite interpretations. Influenced by ancient civilizations, indigenous cultures and his own Afro-Caribbean roots, the artist’s totem-like human and animal figures represent polytheistic deities as well as the general populace of humanity, past and present. Through his paintings, Green explores a number of esoteric themes and metaphysical concepts including cosmology, mysticism, language, code systems, matter, anti-matter, the unseen and the void.

Doze Green’s artistic journey is an ongoing endeavor to act as a channel and conduit of energies. In his words, “to develop a better understanding of the natural and supernatural. Giving voice to those that usually went unheard. I always retain a sense of my origins, but am not wholly reliant on the past. This sparked my interest in metaphysics and the subconscious. I felt compelled to seek the inner root of expression and that’s where I began to discover the harmony within sacred geometry. I am trying to visualize vibration, sound and light.”

ABOUT THE ARTIST
Doze Green was born in 1964 in New York City to a creative family of artists and musicians. His urban background and involvement in the early hip-hop/graffiti movement of NYC in the late 70’s, early 80’s as one of the original b-boy members of the Rock Steady Crew, led him to transition from painting in the streets and subways to creating art for the gallery setting as well as public and private mural commissions. With early mentors such as Rammellzee, and a strong interest in creative exploration and experimentation, a wide range of influences have helped shape Green’s unique style, one that continues to evolve and engage. Audio of Green discussing his work along with a slideshow of his images were featured in a New York Times article about Jonathan LeVine Gallery in 2010. Recent projects include a large-scale mural during São Paulo fashion week in Brazil, as well as Crossroads of Humanity, a public mural commission measuring 20 x 80 feet, located at CityCenter in Las Vegas, Nevada.

BSA Images Of The Week: 05.24.20 / Dispatch From Isolation # 63
Welcome to BSA Images of the Week! Happy Memorial Day Weekend in the US. Happy Eid-ul-Fitr 2020 to all our friends celebrating it, wherever you are. Wash you hands, practice social distancing, do...
Escif: "The War Begins Here" in Valencia
Positions and opinions about war and conflict can be “mainstream” or they may be “fringe”, and historically they can switch positions after the wars are over. One thing is nearly always assured: Gene...
"Closed (In) for Inventory": FKDL Makes the Most of His Confinement, 10 Items at a Time
The world is slowly making movements toward the door as if to go outside and begin living again in a manner to which we had been accustomed before COVID made many of us become shut-ins. Parisian stre...
Irene Valiente at Contorno Urbano 12 + 1 in Sant Feliu de Llobregat
VALIENTE CREATIONS launches the 12+1 project in Sant Feliu - Proyect 12+1, urban art in Sant Feliu de Llobregat, Barcelona, Spain A teacher of drawing from Barcelona, Irene Valiente loves...
"Urban Skills" in Alcoy, Spain brings Nuria Mora, Sebas Velasco, Demsky, Smithe and Dulk
A multiplicity of patterns and colors and fills and histories on intersecting planes that gore, cleave, hack through art and popular culture – this appears as a harbinger for the generation after Y. F...
Brooklyn Street Art Doze Green Jonathan Levine Gallery Manhattan NYC