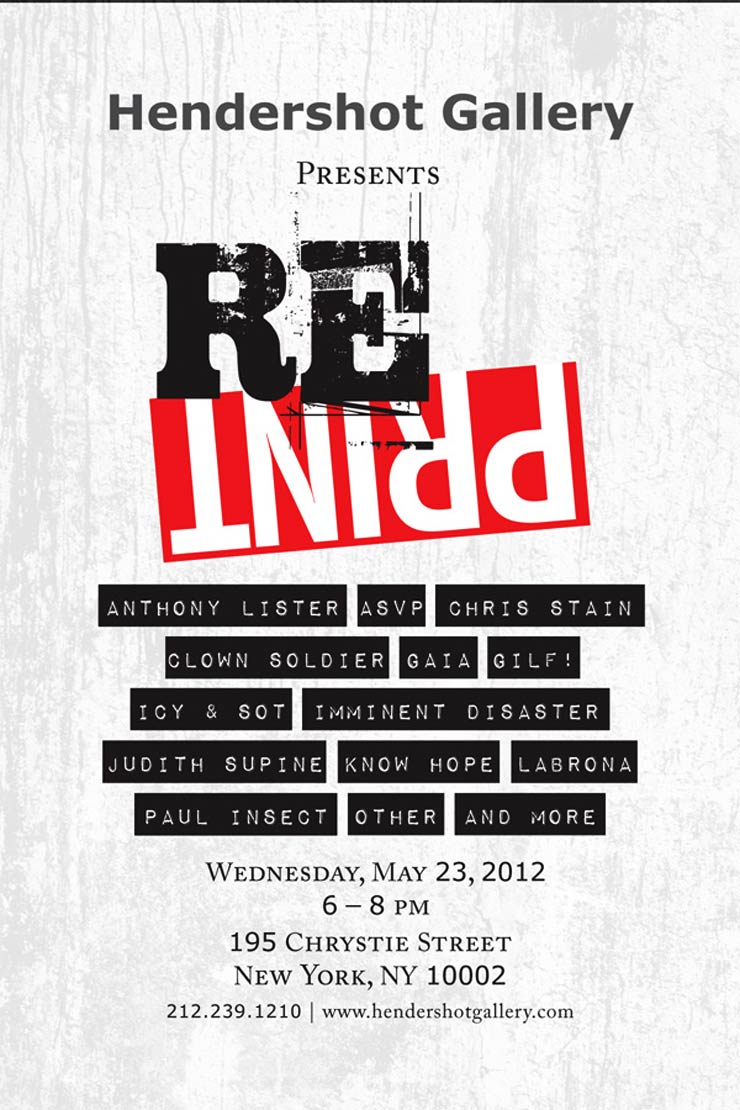 Hendershot Gallery
195 Chrystie Street • New York, NY 10002 • 212.239.1210 • www.hendershotgallery.com
Gallery Hours: Tues-Sat, 11am-6pm and by appointment
FOR IMMEDIATE RELEASE
May 23rd to August 15th, 2012
Opening Reception: Wednesday, May 23 from 6–8pm
195 Chrystie Street, New York, NY 10002 • 212.239.1210 • www.hendershotgallery.com
Anthony Lister, ASVP, Chris Stain, Clown Soldier, Gaia, gilf!, Icy & Sot, Imminent Disaster, Judith Supine, Know Hope, Labrona, Other, Paul Insect and more
New York, NY — Hendershot Gallery is pleased to announce the opening of (Re)Print, a group exhibition open to the public from May 23rd to August 15th, 2012, with an opening reception on Wednesday, May 23rd from 6 to 8 pm. This exhibition will transform Hendershot Gallery into a print shop and project space during the summer months, offering a place to see and purchase limited edition works by street artists from cities around the world. Throughout the course of the exhibition, (Re)Print will come to feature the work of over a dozen street artists, including Anthony Lister, ASVP, Chris Stain, Clown Soldier, Gaia, gilf!, Icy & Sot, Imminent Disaster, Judith Supine, Know Hope, Labrona, Other, Paul Insect and more.
While street art is increasing in popularity among the contemporary art world, the unique relationship between these artists’ public and print work is often overlooked.  In their attempt to reclaim public space, street artists apply repetition with a multiplicity of familiar aesthetics or imagery, allowing anonymous artists to create an easily recognizable identity for themselves. Printmaking’s potential for reproduction and circulation offers an alternative vehicle for the artists in this show to make their work more accessible to the public. (Re)Print celebrates the connection found between these salient aspects of both street art and printmaking.
Often limited to an online market, (Re)Print aims to create a more direct interaction for street art lovers and buyers alike. While not always known by name, familiar motifs found in both their prints and street work are what popularize these artists and enable them to create a visual identity. The exhibition will evolve as the work on view changes and grows throughout the twelve week run, creating an informal experience that offers an alternative to the typical gallery environment.
In conjunction with the exhibition, a select group of artists have been invited to create temporary, site-specific installations at an undisclosed location and will be open to the public for the duration of the show. However, the location will be kept a secret, attempting to preserve the excitement experienced when one unexpectedly discovers a work of street art.
While the rest of the art world may slow down for the summer, Hendershot Gallery will be hosting a program of parties and events to celebrate new additions to the show, special performances and projects around the Bowery. For more information, check www.hendershotgallery.com or follow us on Facebook and Twitter.

"PasteUp Festival" Brings 130 Voices to Berlin Walls
We start here with a fresh paste-up directly from Iran. It depicts the entrance to a mosque bathed in a jewel reddish haze. The lower half of the door contains a cryptic message in the three-dimensi...
Julien De Casabianca, Angry Gods, and Hacking Disaster in Kathmandu
If you are not going into the museum to see art, Julien De Casabianca is happy to bring it out to the street for you. Additionally, if the museum has been closed by an earthquake, he’ll make sure the ...
Os Gemeos Photographed by Geoff Hargadon
We’re counting down the last 12 days of 2012 with Street Art photos chosen by BSA readers. Each one was nominated because it has special meaning to a reader or is simply a photograph from 2012 that th...
Flying Squirrels and Houston Toads : Louis Masai in Texas and Tennessee
Austin, Texas Austin is proud to plead, “Keep Austin Weird.” Street Artist Louis Masai felt like his recent visit to that Texas city was not the only part of the US that one could call weird – it...
Mr. Fijodor: New Works Include People, a Bird, a Tiger and the Natural World
Italy’s Mr. Fijodor has three new projects to share with BSA readers that he recently completed, despite the obstructions that have affected “normal” life. “Some works have been interrupted, some...
Anthony Lister ASVP Brooklyn Street Art Chris Stain Clown Soldier Gaia Gilf Hendershot Gallery Icy & Sot Imminent Disaster Judith Supine Know Hope Labrona Manhattan NYC Other Paul Insect