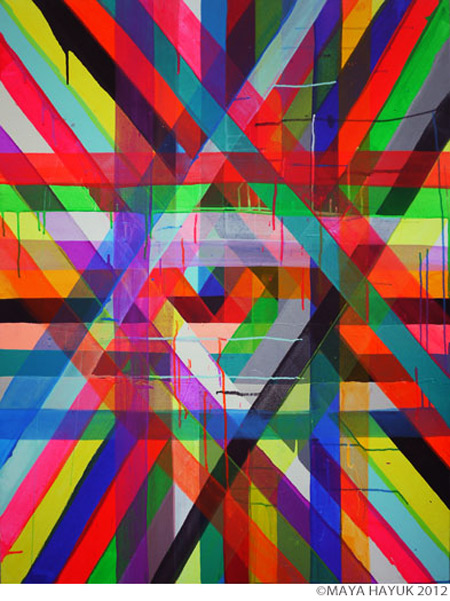 MAYA HAYUK obsesses with symmetry and nourishing color played out in what might be viewed from a kaleidoscope, an aura, or visual mantra. Embracing sexuality and spirituality via symbolism evocative of radiantly woven geometries and parted orifices of the body, her work tries to decode a process towards continuity and wholeness while striking chords of an almost pathological optimism.

Apocalypse: the end of the universe, the collapse of civilization. Bliss: euphoria, peace and joy. The marriage of these 2 words is Apocabliss. With the turn of the New Year, 2012 brought with it prophesies of disaster based on interpretations of the Mayan calendar. Maya Hayuk’s solo exhibition, 2012 APOCABLISS embraces this theme but instead reflects on the possibility of the beginning – the desire to accept positive visions of a future renewed, rather than those of death and destruction. Since ancient times the end of world has brought a haunting pessimism. However Hayuk understands the meaning of these forecasts instead as a transformation in the order of the world as we know it. The real journey of evolution results in the spirit of what remains. Apocabliss is the end of an era beckoning euphoria, peace, and the joy of change.

From her large-scale murals to works on canvas, Maya Hayuk uses bold, explosive colors that often double and refract abstract shapes in proportioned patterns that literally vibrate off the canvas and walls. Layers of electric colors organically bleed and drip into new ones, creating psychedelic zones where space and time collide and form new visual wormholes. Influences abound from Madras patterns and Mexican hand woven blankets, Ukrainian crafts and holograms. Maya Hayuk explores concepts of light, space, fractals and symmetry. Painted diptychs, mirrored versions of each other, like rorschach tests or the two hemispheres of the mind, perfectly flawed in their symmetry. A visual utopia is created through the perfect state of geometric abstraction and subjective composition.

Maya Hayuk is a muralist, painter, and photographer, who’s been living in Brooklyn for the past decade. Her work has been shown internationally, including at New Image Art in LA, Gallery 16 in San Francisco, A.L.IC.E. Gallery in Brussels, and MU, Eindhoven, in the Netherlands, as well as large-scale murals in Brazil, Bejing, the Bahamas, Chile. Maya frequently collaborates with other artists and musicians. She has been a member of the artist collective BARNSTORMERS since 2002 alongside artists including Swoon, David Ellis, Doze Green and Ryan Mc Ginness. She has also produced work for musicians such as M.I.A., TV on the Radio, The Flaming Lips, Devendra Banhardt, Seun Kuti, Prefuse 73, Awesome Color, Oakley Hall, Home, Animal Collective, Dan Deacon and The Beastie Boys, amongst others.

The exhibition 2012 APOCABLISS at Anonymous Gallery in Mexico City marks Maya Hayuk’s first SOLO exhibition with the Gallery. In April Hayuk is also participating in HIGH FIVE, a group show at New Image Art Gallery in Los Angeles. In June she will launch a 2-person show with Paul Wackers at A.L.I.C.E. Gallery in Brussels and will be publishing another series of screen prints with Pictures on Walls.

Overunder Searching for Gold in Northern Nevada
“It's refreshing to work in a very un-urban environment especially when making what is commonly called Street Art,” says OverUnder as he gazes across the gruff and patchy terrain here in northern Neva...
First Monograph by Germany's ECB is "Blurring Boundaries"
Hendrik ECB Beikirch "Blurring Boundaries" (photo of book spread by Jaime Rojo) A respectable and rich first monograph by German Street Artist Hendrik Beikirch, known on the street as ECB, Blurring...
Photos Of BSA 2021: #1: NFT Pirates Ahoy!
We’re celebrating the end of one year and the beginning of the next by thanking BSA Readers, Friends, and Family for your support in 2021. We have selected some of our favorite shots from the yea...
Add Fuel: "Youth Eternal" at Subliminal In Los Angeles
Ripped tiles. Wait, you can’t do that. Not traditional Portuguese Azulejo ceramic tiles… Add Fuel. “Youth Eternal” at Subliminal Projects. Echo Park, Los Angeles. (photo courtesy of Subliminal Pro...
Urban Art and Science, Twee Muizen in Barcelona
Artist couple Twee Muizen (Two Mice) complete a new mural for a scientific environmental organization. 20 meters of the mural has just been completed that organizers say celebrates science, art, and t...
Anonymous Gallery Brooklyn Street Art D.F. Maya Hayuk Mexico City