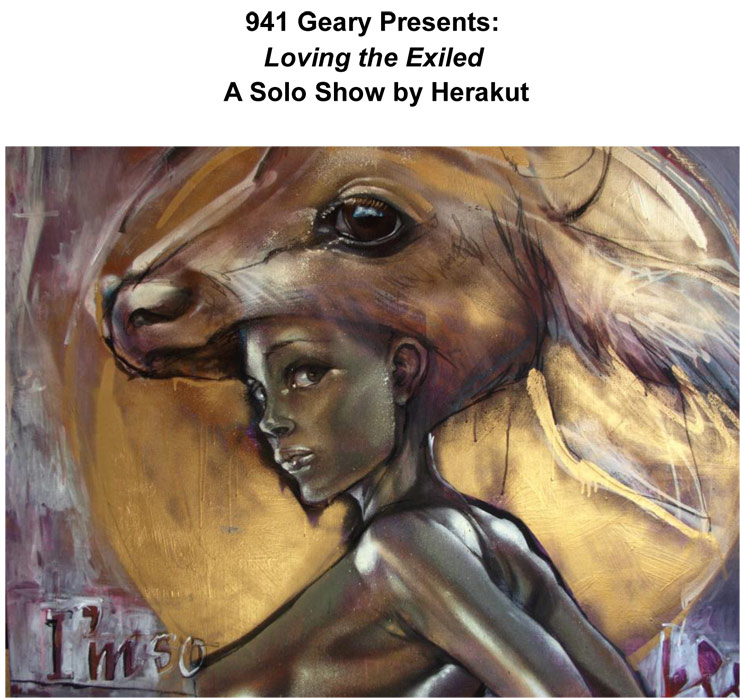 gaze out at us with eyes both sad and resigned, asking nothing of us but a basic empathy.

We like to see each Herakut piece as the sum of a dialogue between Hera and Akut, a synthesis, a conclusion. And often this final thought is the first line of a new discussion, a new dialogue that will lead up to a new piece of art. That is how we have worked ever since we teamed up in 2004. Over the past years of collaborating, our palette has changed, of course, and we have learned to blend our different techniques, my sketchy lines and Akut ́s realism, ever smoother. It’s actually pretty funny that we do not even talk about the actual painting process. We only talk about the content. Our discussions take place in the world of reason and philosophy. What our hands actually do with our spray-paint is left up to them really. We just focus on telling a story. If the piece turns out pretty or not, is just a side-effect. The thoughts they carry are what we worry about. The messages are what we spend our days on.

To the San Francisco show we will be bringing characters that have fallen from grace. We took a look to the banned and exiled, the abandoned child that first cries of fear and then of rage, flocks of scapegoats, a choir of arch enemies, the outlawed, the out- numbered, the ones that know they are very last of their kind, the extinguished. When will we end up in their place?

Herakut is an artist duo made of Jasmin Siddiqui, born 1981 in Frankfurt, West Germany, and Falk Lehmann, born 1977 in Schmalkalden, East Germany. Their artistic style is as symbiotic as their name, which in itself is the symbiosis of the two individual graffiti synonyms Hera and Akut. A love for traveling and painting for the public eye are just a few of the things of the things Akut and Hera have in common. Their work, however, is based on bringing together contrasting elements: masculine vs. feminine, Eastern vs. Western, the roughness of Street Arts vs. the detail of Fine Arts.

Since 2004, Herakut has painted and exhibited in prestigious big cities like London, Berlin, New York and Paris, but have also spent a lot of valuable time painting the dirty sides of less glamorous cities such as Ekaterinburg, Russia or Campeche, Mexico. Both of Herakut ́s publications, The Perfect Merge published in 2009 and 2011’s After the Laughter have received great success, with the two books selling over 10,000 copies worldwide.

Alternate entrance through the alleyway:

MARTHA: A Picture Story. Shots from the Premiere and Movie Review
First things first - Full disclosure; we are featured in the movie and we are close friends with both the subject of the doc and the director and we first suggested to the director that she was the p...
Martha Cooper Library Presents: From Street to Canvas. Martha Cooper, MadC and Nika Kramer
With the foundation’s Dr. Hans-Michael Brey doing the intro, with YAP’s Sam Walter in the audience along with our show catalog contributor Christian Omodeo, and us in the front row – it was a great w...
URVANITY 2018: 3 Days in Madrid
Today we go to the Urvanity New Contemporary Art Fair in Madrid to see some art inside and outside the fair and to hear about some of the programming happening there, courtesy of Fernando Alcalá Losa....
Bordalo II and Polar Bears in Nancy, France
Bear with us, it’s a new installation by Bordallo II Bordalo II. Nancy, France. February 2020. (photo courtesy of Mathgoth Gallery) "This is the first time I've made a polar bear,” says Street ...
"Cash Is King II" is Rolling In It at Saatchi in London
Now that corporate and global debt has surged to an all-time high, posing unprecedented risk to the value of all money, it’s a sweet and sour nostalgia that drives you into your purse or wallet to pl...
941 Geary Gallery Brooklyn Street Art CA Herakut San Francisco