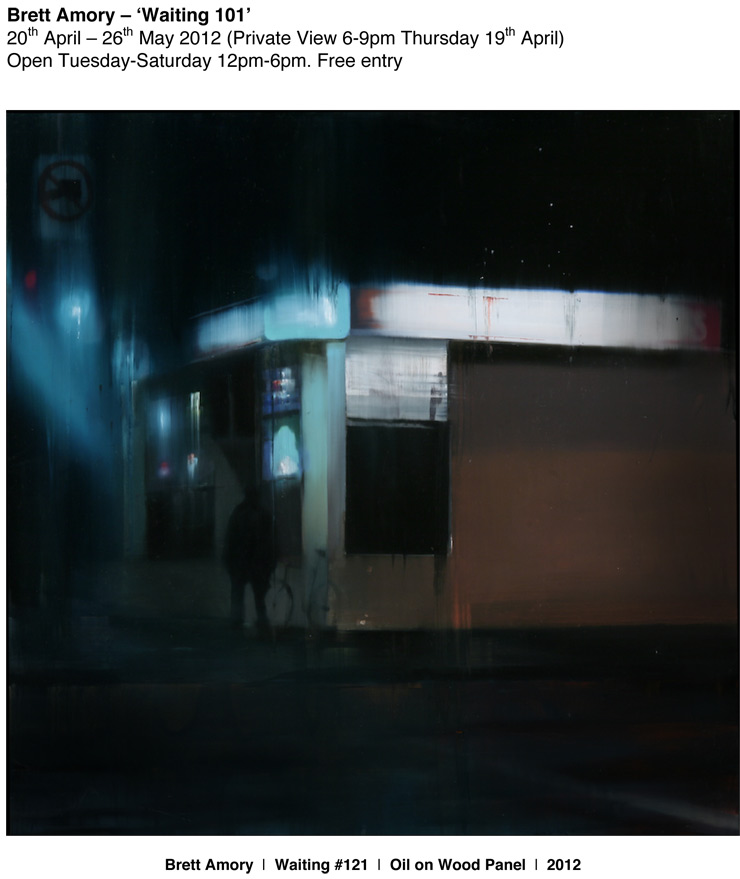 American contemporary painter Brett Amory is widely considered one of the breakthrough artistic talents of the past year. He is best known for his Waiting paintings, a body of work that has spanned the last decade documenting figures and landscapes in the Bay Area. The new collection ʻWaiting 101ʼ debuts at Outsiders Gallery in Newcastle, UK on April 19th 2012.

The compositions in the exhibition focus on Amoryʼs newfound relationship with technology, and the implicit freedom it allows in his work. Delving into documentation methods which new modes of ambulatory technology offer, Amory experienced a metamorphosis in his painting preparation and application. With intimate, firsthand knowledge of the many ways that technology can affect the lives of those it touches, Amory explores the avenues itʼs opened up for him as an artist in ʻWaiting 101ʼ.

Photography applications with sophisticated software (such as Instagram) have allowed Amory to expand the scope of his series. Heʼs now able to capture critical moments that strike him as they unfold. “With my iPhone, I always have a camera on hand. Iʼm able to capture what I experience day in day out,” he says. “Every morning I wake up and walk to the café for a cup of coffee. On the way I see the same people following their own routines. New technology allows me to document these people as they go about their lives. Capturing the people I see in my neighbourhood on film and later on canvas, is really a documentation of what I do and see on a daily basis. This body of work aims to give the viewer a look into my own experience. Hopefully it opens up a deeper personal exchange between myself and the viewer.”

Inspiration has never been so easy to manipulate and document. Amory expertly wields the tools available to him, with the intent of maintaining and evolving the series that has garnered him international acclaim. Prior to Amoryʼs use of the camera phone, his process involved painstaking research and meticulous stake-outs at chosen locations. This was always with the hope of capturing a moment and individual suitable to his artistic vision. With the modern software now in his employ, Amory has the world at his fingertips _ as evidenced in ʻWaiting 101ʼ. His compositions show a radical departure from his historical works in their obvious spontaneity, yet remain true to his unequivocally distinct technique.

Panteón and Watchavato "No Esto No Es Lo Que Fue" Opens In Mexico City
This week BSA is in Mexico City in collaboration with Urban Nation Museum of Urban Contemporary Art (UN) to see what is steering the scene on the street, meet artists, visit artist compounds, muse...
BSA Film Friday: 07.15.22
Our weekly focus on the moving image and art in the streets. And other oddities. Now screening:1. Turnout - Michael Van Swearingen2. ENTER via Graffiti TV 3. Carlos Mare - 12 Levels of Graffit...
BSA Images Of The Week: 02.20.17
We have a lot to show you this week of art from the street, museum, and studio. This horrid and chaotic political environment is proving to be fertile soil for the growth of politically themed w...
Spaik Goes Seaside in Quintana Roo
Mexican Street Artist Spaik continues to combine his love of urban art with the historic mural art of his country, mixing folk elements and cultural symbols to tell stories both real and imagined. Her...
Nuart 2016: 'Post Street-Art' and Our Changing Terminologies
For a considerable time now at BSA we’ve been discussing with authors, artists, academics, writers, historians, political scientists, sociologists, criminologists the topics of Street Art, graffiti, U...
Brett Amory Brooklyn Street Art Newcastle The Outisders Gallery U.K.