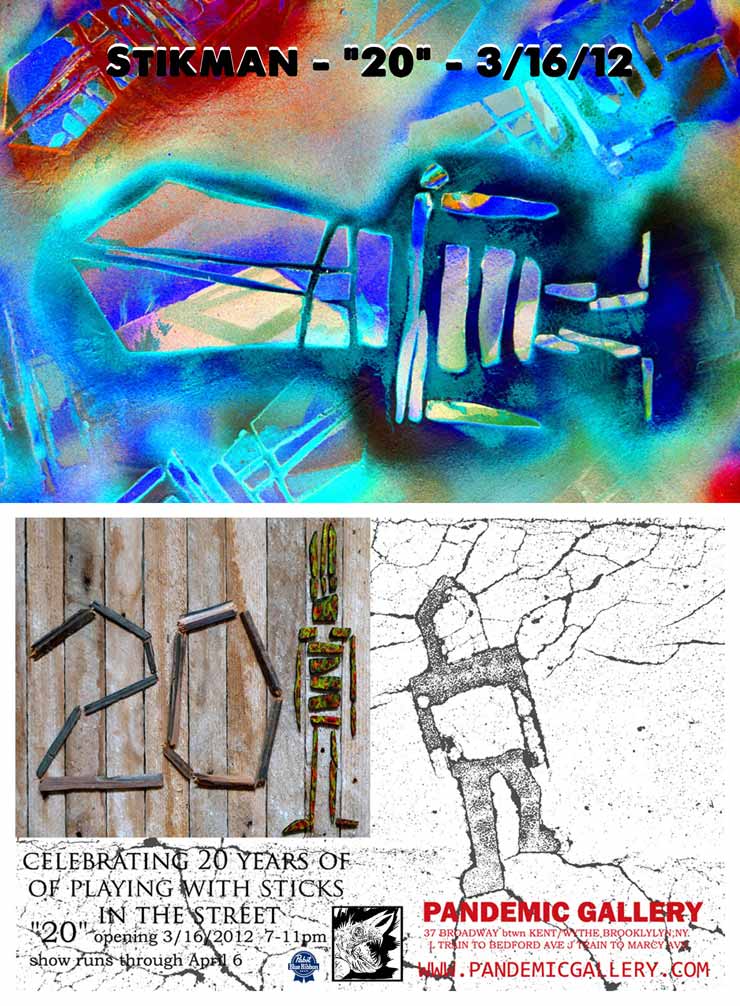 “20” a solo exhibition by Stikman

What more can be said about the mysterious artist known only as “Stikman” that hasn’t been uttered hundreds of times by passersby all over the city? His work is sneaky, incredibly thought provoking and uncommonly satisfying to come across, and if you have been living on the east coast or, well, basically anywhere in the states you no doubt have discovered it in some aspect. It could be in the form of 3D men made of small sticks to figures hidden in iconic imagery pasted to doors, or literally under your feet, smashed into the concrete. The range of mediums used and the calculated creativity given to each piece is overshadowed only by the sheer amount of work he has affixed to our cities surfaces. Tireless efforts aside, his stick formed character remains one of the most recognizable images in urban art culture. So, on that note we are proud and excited to announce the first solo exhibition of our favorite and New York’s most elusive street artist: Stikman.

It was the summer of 1992 that I deployed my first stikman in the East Village. In the early years the sticks were not painted, It took me much longer to make them at the time because I was always changing the way they were constructed. In the first year I don’t think I made more than 50 of them, they were between 5 and 6 inches tall and made of basswood. By 1996 I had started painting them and begun producing many more per year.

Once I started painting the 3-D stikmen I also started to paint stickers. Combining the 2 dimensional graphic element expanded my view of the ever changing stikman form, and the project took off in unforeseen directions. I was finding many different materials and processes with which to explore the realm of stikman.  Over the years I have affixed and painted the stikman on numerous LP record covers, prints, book pages, cut paper paste-ups, hollow core doors and a variety of metal, wood, cloth and plastic objects. Some of my favorite pieces include stenciling images on ping pong balls, bricks, tiny slide viewers, and playing cards. And of course there were always little wooden men made of sticks.

My pieces start their lives as static objects, but they come to life when I place them in a public place where they are subject to the forces of time, interactions with humans and climate. I share this transient form of art to connect with a viewer whom I will never meet, in hopes that the joy of finding the unexpected has altered their consciousness. It finds an indigenous space in our surroundings like a flower escaping from the crack in a sidewalk. Continuously altered by time and circumstance.

To celebrate twenty years of playing in the street with sticks I have created a special battalion of twenty figures to send out into the world with the hope that the friends of stikman will take him along on new journeys to places he has not yet been. I have also created twenty works on paper to commemorate the paper element associated with stikman.Ten of these are PAINTBLAST, which is a form of automatic painting that occurs when I paint the wood figures.

BSA’s 15 Most Popular Murals Of 2017 – A “Social” Survey
How do you measure the success of a street piece? Foot traffic? How long it runs before being dissed? The Internet revolutionized our lives and our definition of community and along with that we ex...
Shepard Fairey says "Action is worth more than words" with Marianne in Paris
“I actually side with people who oppose injustice,” says Shepard Fairey, “especially when it comes to human rights.” He’s speaking about the recently vandalized mural of the famous Marianne produ...
Berlin Diary. Day #4 / Berlin Visuell
Imagine landing in a new city where you don't know the language. Signs make no sense, people speaking around you are a puzzle. Looking out the window of the bus or plodding along the sidewalk you...
Jetsonorama Wraps a House with Pots in Penland, North Carolina
When one thinks of pots and pottery and clay urns, you may imagine them with patterns and motifs wrapped around their exterior. Botanicals, animal life, figures, even architecture, all become decorati...
SpY: AI and "Data" For Light Show at LUZMADRID
Every time you hear “artificial intelligence” you think of Becky Thompson from you 9th –grade Earth Science class. Admit it. But this is an entirely different interpretation of artificial intelli...
Brooklyn Brooklyn Street Art NYC Pandemic Gallery Stikman