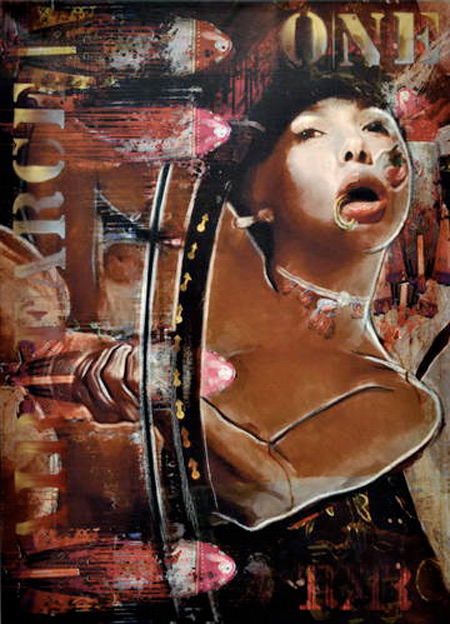 The artist known as Trxtr has been building himself a very strong reputation on the Urban Art scene over the past five years, the evidence for this success being some recent notable auction results. He has shown his work in around the Bristol area and also in group shows in London and Los Angeles. This will be his first solo show in London

Trxtr believes that in using a wide variety of techniques, he can create the effect of spontaneity and freedom that he is aiming for. His own (incomplete) list of techniques used ‘Chemical, digital and Polaroid photography, high resolution scans, large format archival printing, collage, painting, drawing’ says a lot about where he is coming from. This is not an artist who is wedded to any particular medium, but for him a rather more Machiavellian ‘ends justifies the means’ approach is favoured. He sees purist attitudes to techniques and mediums as ‘Ludditism’.

The work Trxtr has produced for the ‘Pretty Lethal’ show at Signal is the culmination of this period of experimentation and creative self-discovery. The works will show us as an eclectic mix of atmospheres and emotions, as the techniques he uses to produce them. Their overall effect is disturbing and alluring in equal measure. Concerns about exploitation, globalization and corruption appear over and over again, but the tone is ambivalent. He is not preaching to us, but reproducing some of the sickly sweet images of commercialism in a way that it is genuinely hard to tell if he is celebrating them or railing against them. This interesting and unsettling approach has something of effect of Jeff Koons work.

The works Trxtr has produced for the ‘Pretty Lethal’ will make a very strong introduction to his work for London audiences. Like Koons, we may find that audiences are split, between those who can and those who can’t see beyond the surface seductiveness of the work.

BSA Film Friday: 07.11.14
Our weekly focus on the moving image and art in the streets. And other oddities. Now screening : 1. Auckland's Al Fresco Festival 2."Where The Food Grows" by Noah Throop 3. Herakut: ...
BSA Images Of The Week: 07.01.18
This week's edition of BSA Images Of The Week is heavy with messages, especially on the subject of refugee children and our responsibility to keep them safe. Family Values, as we once heard on a...
Fabio Petani Inspired by the Alps in Grenoble, France
Indeed, the Grenoble Street Art Festival in France doesn’t care about you unless you parlez français – at least that's the impression you'll get from their website and social media. Nevertheless, they...
BSA Images Of The Week: 02.17.19
New York kicked Bezos out on his keester this week on Valentines Day - although Amazon will depict their withdrawal as a breakup with NYC. You should never feel bad about leaving an abusive relat...
"The Rebel Bear" Self-Publishes Surveillance Critique on Streets of Edinburgh
"Browser history stored and made available to authorities.""Phone records collected en mass through NSA""Facial recognition being rolled out in the UK." The Rebel Bear. Edinburgh, Scotland. (photo...
Brooklyn Street Art London Signal Gallery TRXTR U.K.