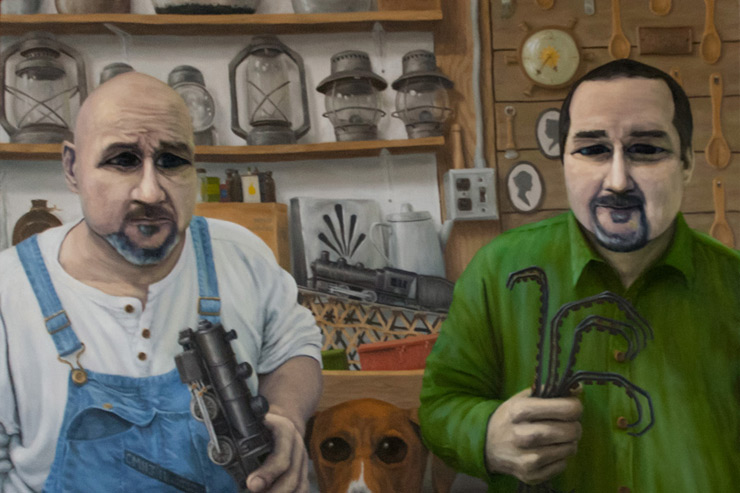 The Active Space opens an all-new exhibition space
in its Bushwick facility with a reception for “Dreaming Without
Sleeping,” a presentation of new works by Criminy Johnson | QRST, on
February 24, 2012.

“Dreaming Without Sleeping” allows viewers to glimpse the artist’s
view of our waking world: a bent, slightly pessimistic and
occasionally hostile place populated by animals and people who are
often reluctant to be interrupted by the viewer.

“Criminy makes oil paintings in his studio but often makes wheatpastes
that relate to these in some way. Many people are familiar with
Criminy’s work but may have seen it outside of a gallery setting, and
QRST fans might be discovering Criminy Johnson’s paintings for the
first time,” says curator Robin Grearson, who worked with Johnson last
year on a group show at the Active Space. “Criminy has been in
Bushwick for a few years, and QRST’s street work often shows up here,
so the Active Space is an ideal location to present the two styles
together.”

“We opened in February of last year, so I’m happy that the first show
in our building’s brand-new gallery space falls on our first
anniversary,” says Ashley Zelinskie, director of The Active Space.
“Robin is an accomplished writer, yet this is the third show she has
curated here. Last year we discovered that we really work well
together, and one thing I appreciate about my role as director of a
Bushwick art space is the opportunity I have to support emerging
artists and curators I believe in.” Zelinskie says.

The opening reception for “Dreaming Without Sleeping” takes place
February 24, 2012, from 7-10 PM. The show will be open to the public
by appointment through April 20, 2012. Email ashley@566johnsonave.com.

BSA Film Friday: 12.04.20
Our weekly focus on the moving image and art in the streets. And other oddities. Now screening : 1. Fintan Magee / Nothing Make Sense Anymore / A Selina Miles Film2. Aufstieg (Rise) by Eginha...
Horror, Humor and Tiny Interventions from Sara Lynne Leo
Alter egos of the common fiend. Many Street Artists and graffiti writers create a new character to inhabit – as actor or director.  New on NYC streets, illustrator Sara Lynne Leo seeks to capture...
Jellyfish and Sharks and Octopi, Oh My! Tahiti’s ONO'U, Part Deux
Our intrepid Ms. Cooper had to island-hop to snap photos of the rest of these colorful murals in Tahiti for the ONO’U Festival. Raiatea is the name of the island and Martha was told that it was known ...
#Tag Street Art in Tel Aviv / Dispatch From Isolation # 9
Here are new pieces on street walls from the Street Artist named #Tag in Israel, who is interpreting art-world and TV icons through the lense of the current Covid-19 crises. With new pieces on the st...
Giacomo RUN x Basik Wrestle with the Renaissance and Modern Economics in Florence
The Church of Santa Maria Novella, The Opera del Duomo Museum, the Uffizi Gallery. Florence is forever tied to Renaissance art history and shares its cultural riches with the world daily, including a...
Brooklyn Brooklyn Street Art Criminy Johnson NYC QRST The Active Space