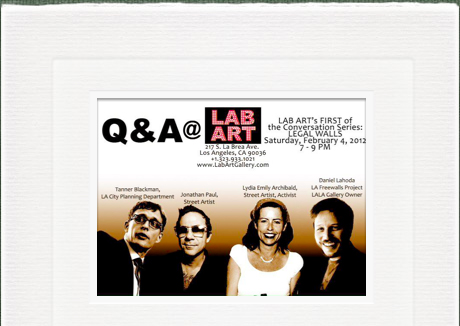 A CONVERSATION BETWEEN STREET ARTISTS AND LA CITY OFFICIALS

January 27th, 2012, Los Angeles, CA – LAB ART, the largest art gallery in North America dedicated to Street Art, opens up a new era in the Los Angeles art scene by creating a dialog between LA City Officials and Street Artists with their new panel discussion ‘Q&A – LEGAL WALLS.’ LAB ART is thrilled to bring a new conversation to the LA art scene where LA City Officials sit down with Street Artists and discuss how the policies they created really affect the Artist.

Representing the City of Los Angeles is ‘Tanner the Planner’ the well known Los Angeles city planning official who is cited by LA Weekly as single-handedly raising the issue of the 2007 controversial public mural moratorium and helping to rewrite the Mural Policy to lift the moratorium. Showing the support of the Los Angeles City Counsel for public art will be Council Member John Darnell of District 5.

Lydiaemily, Activist & Street Artist who was arrested by the LAPD and made an example of by the District Attorney for practicing her craft on the streets of LA, now gets a chance to create a practical dialog with the City that arrested her. Not something to miss.

“Our society seems to have a difficult time accepting responsibility, and as a guy who paints on walls I guess that means that I do as well.  As our attention span shortens from our sugar high, democracy has been replaced by capitalism. Rome is falling again. Hold on. Meanwhile let’s play in the streets and have a good laugh.” – DOC

Exclusive Street Artist DESIRE OBTAIN CHERISH (DOC) will be rounding out the panel as an artist who straddles both the urban world of street art and the high concept world of advertising as a graduate of Parsons. He recently contributed to the international Street Art scene by taking part in the Madrid Street Advertising Takeover (MaSAT) in Spain.

– The Question of Materials : Who creates the official guide for muralists?

– Subject Matter : Who sets the ‘acceptable standards’ for independent walls?

– Existing ‘illegal’ Murals : How does the new policy effect existing murals? Will there be a ‘grandfather’ clause?

– Sponsor Art : What are the guidelines to distinguish ad from art? Where does sponsored art fall?

LAB ART Los Angeles is dedicated to an alternative exhibition of street art and installation. The gallery features works of more than 30 of the most prominent and up-and-coming names of the Los Angeles Street Art scene and beyond. Spanning 6,500 square feet of gallery space, LAB ART offers art collectors and art lovers a dynamic roster of vibrant and thought-provoking exhibitions.
Tanner Blackman –
Tanner Blackman is a planner for the Code Studies Section of the City of LA’s Department of City Planning and an adjunct professor of urban planning at USC’s Price School of Public Policy.  He has taught in the Future Initiatives Program (SCIFI) at the Southern California Institute of Architecture.  He is responsible for drafting LA’s citywide mural ordinance.
Lydiaemily –
Lydiaemily Archibald is a political activist, and both a street and fine artist. Her fine art has been shown in galleries world wide. She has produced murals throughout California, including Los Angeles and San Francisco.

DESIRE OBTAIN CHERISH lives and creates in Los Angeles. He graduated from Parsons and has won awards creating advertising campaigns, composing music, and art directing fashion magazines. DOC has gained respect for his sharp wit and graphic style on both the streets and in galleries. He has been attracting an international reputation as well by contributing to the Madrid Street Advertising Takeover (MaSAT) in Spain 2011, as well as numerous gallery shows across the US.

ESCIF "La Pared Es Nuestra". Sant Feliu de Llobregat. Barcelona
When Street Artists and graffiti vandals are looking for a spot in public space they sometimes claim a wall as their own – even if someone else owns it. It’s a bit of hubris, but it helps with the str...
BSA Images Of The Week: 04.11.21
This week we received a note from a friend in the graff/street art community urging us to encourage street and graffiti artists to create artwork on the streets that beseeches GenZ to get the Cov...
"Born In The Bronx" Expanded: Joe Conzo's Intuitive Eye on Early Hip Hop
Born in the Bronx: A Visual Record of the Early Days of Hip Hop Yes, Yes, Y'all, it's been a decade since this volume, “Born in the Bronx,” was released. The images here by photographer Joe Conzo ...
Bordalo II and Polar Bears in Nancy, France
Bear with us, it’s a new installation by Bordallo II Bordalo II. Nancy, France. February 2020. (photo courtesy of Mathgoth Gallery) "This is the first time I've made a polar bear,” says Street ...
Discovering a "Magic City" in Dresden, Germany
A couple of weeks ago BSA was in Dresden, Germany to help lay plans for a new Street Art show opening there this fall called “Magic City” and naturally we hit the streets with bicycles three days in a...
Brooklyn Street Art CA Lab Art Gallery Los Angeles