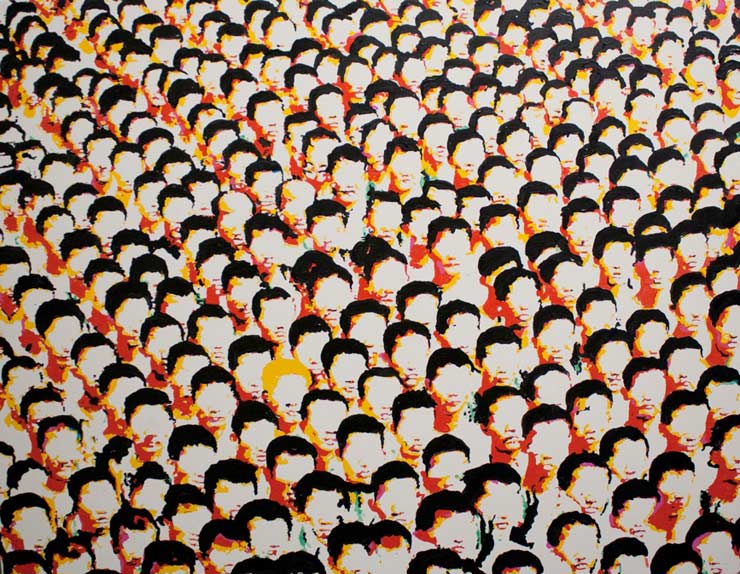 ONO'U Festival 2016 as Captured by Martha Cooper in Tahiti
Lucky Us! Our senior reporter on the ground in Tahiti for this years’ ONO'U Festival is the quick-witted eagle-eyed Martha Cooper, who shares with BSA readers her fresh shots of the action in paradise...
Faile "Fuel, Fantasy, Freedom", or Hot Rods, Unicorns & Coloring Books
Hormonal murmurings, childhood dreaming, race cars, hot rods, porky pig. All are on display at Fuel, Fantasy, Freedom, the new show by Faile running roughshod all summer at Galerie Hilger NEXT in Vien...
James Marshall DALEK "The Redistribution of Destruction"
A quick look at new works by James Marshall aka Dalek for his show, “The Redistribution of Destruction”. His bright colors and geometric op art is bent through the lens of Murakami and yet glows occas...
‘Homo Naledi’ in Baltimore Points to Our Modern De-Evolution
When you look at the corporate yellow journalism flashing across screens today, the shallow and sensational rhetoric may lead you to believe we are devolving as a race. In fact it is just the opposite...
"Aliens, That's What They Called Them"- Molly Crabapple on the Streets
"I left all my memories in Syria, so there's nothing left to take". "Husband works in construction. Husband salary depends on luck, waits on side of the street to get picked". "Prefer by land, ...
Alexandros Vasmoulakis b. Bast Bengt Lindstrom Bernard Buffet Brooklyn Street Art David Mach Dinorah Delfin Gerard Rancinan Henri Matisse Jean Dubuffet jean michel basquiat Joan Miro John John Jesse Judith Supine Karel Appel Kid Zoom Lita Cabellut Lori Earley Manhattan Marc Chagall Marco Guerra Maura Corda NYC Opera Gallery Pablo Picasso Paul Insect Philippe Pasqua Pierre-Auguste Renoir Ron English ROSTARR Sas Christian Simon Birch Tianbing Li Xiao Gang Zhang Yan Pei Ming Yasmina Alaoui