New York Street Artist Chris Stain is making some new pieces for his upcoming show at CAVE Gallery in LA with Street Artist Veng and Taka Sudo on February 11. The signature portraits, mounted on wood, of the everyday people Stain is known for depicting, are joined here by a new one one of the noted and celebrated American poet who passed in 2011, Gil Scott Heron.

Often you catch a piece by someone on the street or in a gallery, and you wish you knew the story behind it. Sometimes there isn’t much of a story – it’s more of an aesthetic exercise.  In the case of Chris Stain, the work is frequently drawn directly from his ongoing study and observations of socio-economic conditions in American society. With his portraits he examines how people are deeply impacted by a system that they feel affected by but frequently unable to affect in a meaningful way. Other times they are simply meditations on being alive.

Each piece is made from a hand-cut rubylith film that he burned onto a screen and then printed on wood and colored in by hand. Here are some detail photos, along with Chris’s words to describe them. 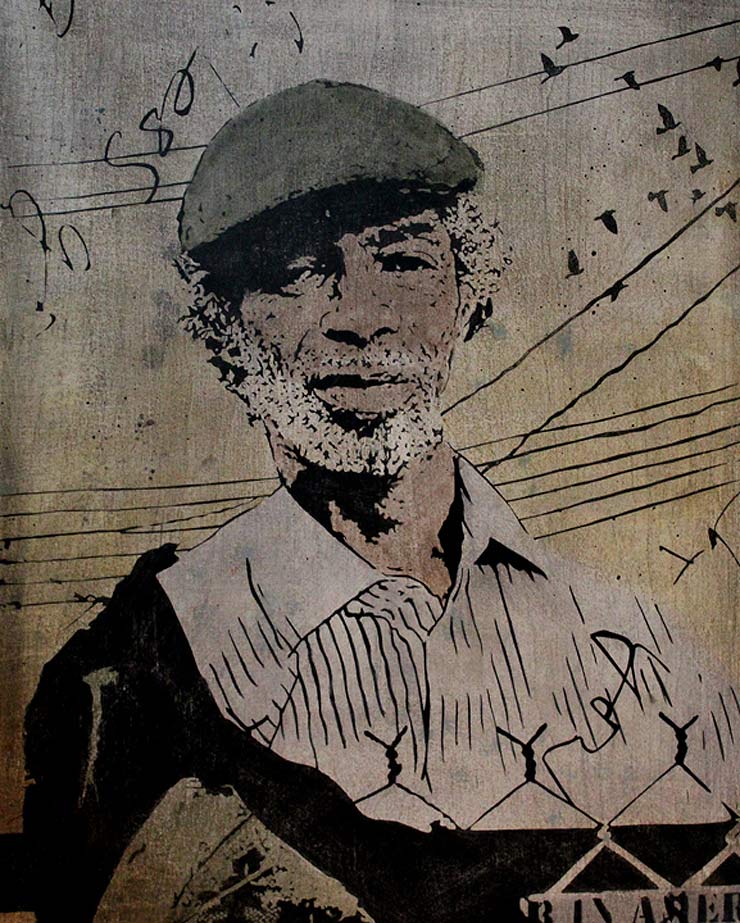 For many years now I have gained inspiration from the music and writing of Gil Scott Heron. After his passing I thought it seemed fitting to create a piece in homage to the man and his achievements. If you know of Gil’s work and life you know that he struggled at times from addiction and the curve-balls that life threw at him. What I appreciate about him most is his ability to express his experiences in such a heartfelt way through music and writing. 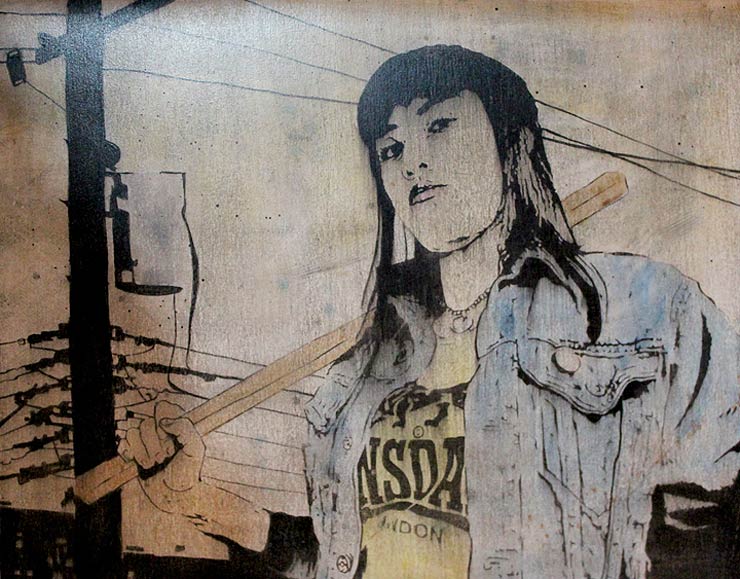 When I was younger, in the mid 80’s, I was an avid disciple of hip hop culture. When I hit adolescents I was turned onto punk rock and skinhead culture. Obviously not the white power skins here people. There’s a good little video here explaining the history of Skinhead and where it came from.This piece is a throw back to those days and how it meant something to be a part of an alternative lifestyle. 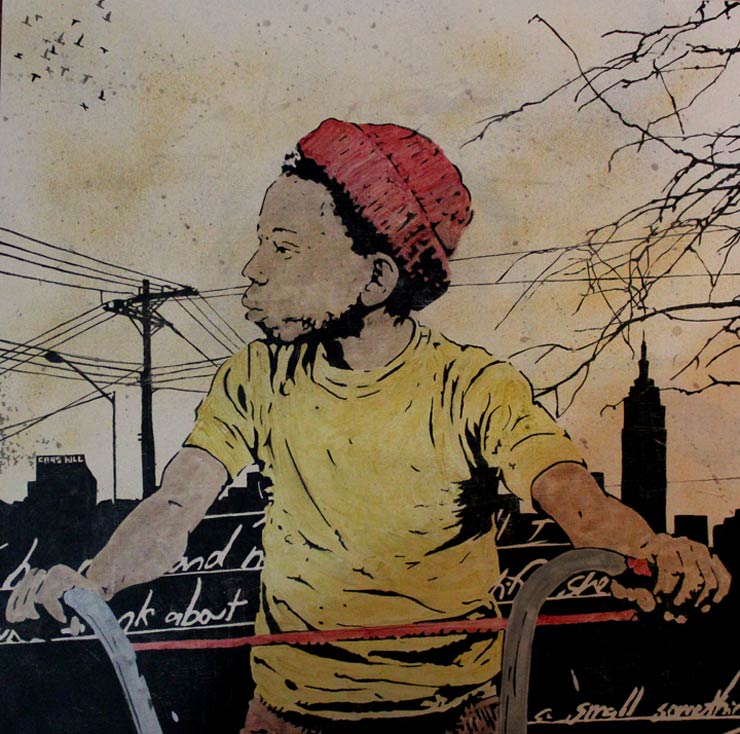 “A Small Something”  by Chris Stain

This piece looks back on the feeling of first riding off on a bike on your own. The first time you leave your neighborhood and explore; freedom, in a sense. As you get older it’s not such a big deal to adventure out alone. With this piece I further explore the use of handwritten text in the layout to see how it interacts with the image. However with any of the above pieces people will read into them whatever they want which is okay with me. 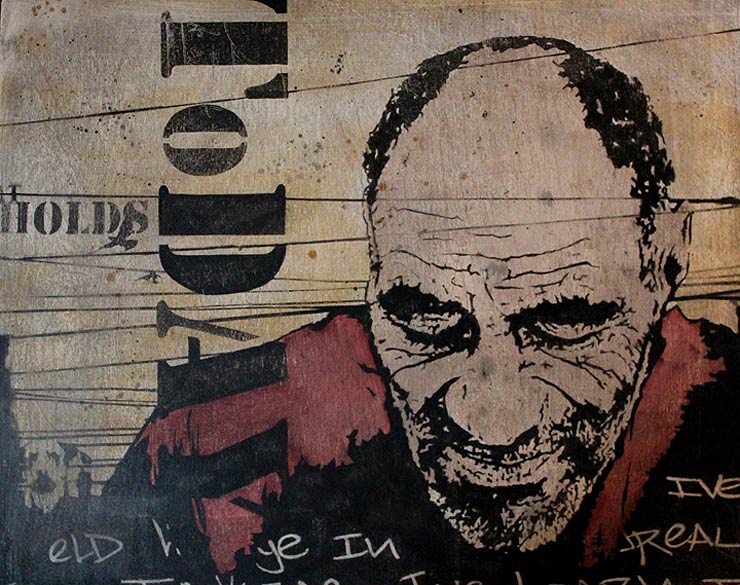 “What Holds Today” by Chris Stain

The title is a play on words for what today holds. It’s about trying to make it through the day no matter what’s in store. Some days are easier than others and some days you just feel like giving up on everything. So What Holds Today means whats going to keep this day together when the shit hits the fan. 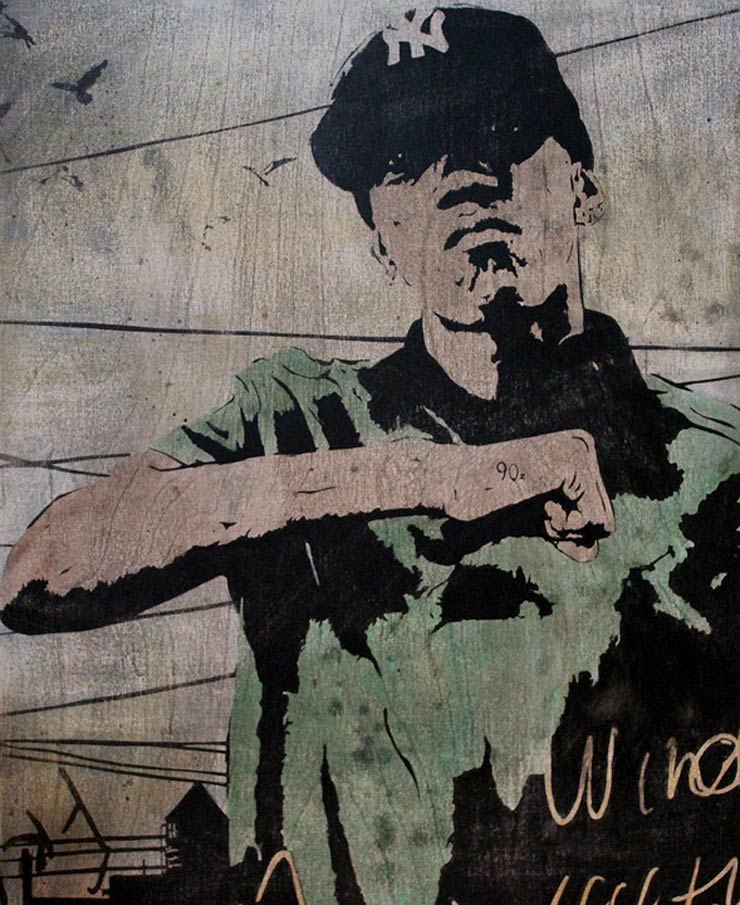 Willem was a student I had in one of my printmaking classes last year. I photograph the kids as part of our self portrait project. When Willem stepped up in front of the camera with this pose I thought that there was no way I wasn’t using this picture for a piece of my own! I have painted this outside twice in NYC and once in Miami but this is the first time I made it as a finished piece for a gallery.

Images of the Week: 02.26.12
Our weekly interview with the street, this week featuring AVOID, Boxpark, Dan Witz, Gilf!, Jaye Moon, Kosbe, Love Me, bunny M, Power Revolution, Pure Evil, Rae, and some new stuff in London from gue...
Turbulent Waters In The Black Sea From Jake Aikman in Kiev
“Getting a feel for dramatically upscaling my process,” says London born Jake Aikman as he brings a foreboding and riling image of the Black Sea to Kiev in the Ukraine. Primarily a studio painter back...
NUART 2014 Roundup : Activism, Muralism, Graffiti and Aesthetics
The Norwegian mural festival named Nuart took place last week with a marked tilt toward the conceptual and the interventionist, a direct debate about the relevance of activism amidst a rising tide of ...
Icy & Sot: International "Last Supper" & Almighty Dollar in Coney Island
“In this piece they are all figures from different currencies – like from Iran, Korea, China, England, the US, Pakistan…,” says Sot of the new one layer stencil they are preparing for Jeffrey Deitch’s...
Igor Ponosov Enlightens with "Russian Urban Art: History and Conflicts"
An academically sourced opinion-based essay in book form that looks to art, social, economic, and geopolitical movements during the start of the 20th century to better understand the evolution of Urba...
Brooklyn Street Art BrooklynStreetArt.com CAVE Gallery Chris Stain L.A. Steven P. Harrington Taka Sudo VENG