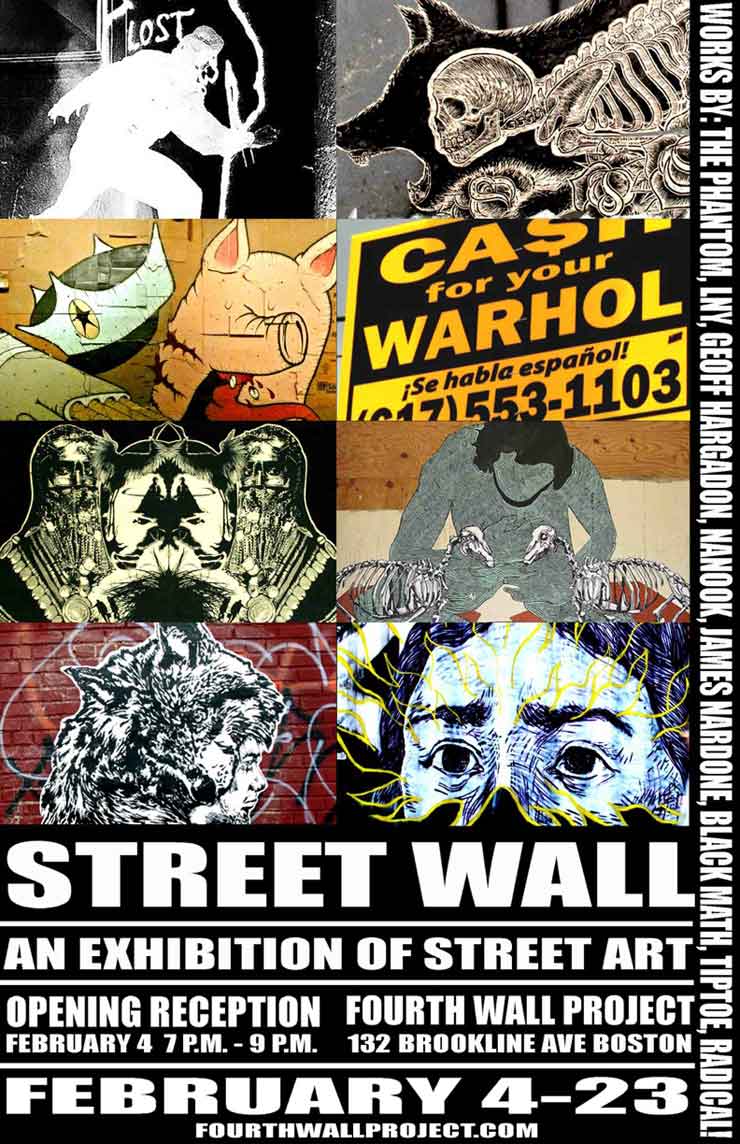 Street Wall is an exhibition dedicated to artists who work on city walls to create public art.  The artists highlighted in the exhibition are creating an installation directly on the gallery walls.  Each artist is given a 2 to 4 panel section of wall space on the interior of the gallery for them to wheat paste work in the gallery resulting in pristine versions of their public work as well as initiating a collaboration in close quarters.  Curated by William Stitt at Fourth Wall Project in Boston. The show runs from Feb. 4 – Feb. 23

LNY, Radical!, Tiptoe, Nanook, The Phantom, Geoff Hargadon, Zatara and Blackmath.  LA artist, The Phantom, has been working as a street artist internationally for over twenty years.  He has directed videos for Rage Against the Machine and has also done their cover album art for “The Battle of LA.”  Local Boston based artists Zatara and Blackmath have been working primarily in the area but have travelled all over to bring their unique work to the streets. Zatara uses collected screen printed images that combines visually overstimulating scenarios of apocalyptic visions of society.  Blackmath employs large woodcut prints in his wheat paste work.  Intricate and beautiful it plays on emotions that are both whimsical and dark.  Geoff Hargadon’s “Cash For Your Warhols” signs can be seen all over cities internationally. His collection of signs are part social experiment, making the viewer question its reality in our capitalist heavy landscape. New Jersey artist LNY’s work is both visually stimulating and carries an energy of offbeat images. New York based artists Tiptoe and Radical! have been populating the streets with their images. Tiptoe uses mythological imagery in his savage and beautiful images that cause the commonplace walls in which they are pasted to become something more ethereal. Radical! Works both on the streets and off employing scenes of darkly comedic characters. Nanook, from Baltimore, uses humans and animals in his animated line work wheat pastes. The style of his works moves perfectly on the walls of abandoned Baltimore buildings as well as in the gallery. Live screen printing by Antidesigns.

Founded in 2009, by the Bodega Crew with a goal of creating more places for punks to loiter, artists to flourish, and more voices to be heard.

The idea was to turn dormant commercial spaces into pop up gallery spaces reclaiming urban space for public art projects and progressive exhibitions.  We keep it independent/free form and curate cultural artifacts for the neighborhood. We settled into our current location at 132 Brookline Ave. Boston MA 02215 a wonderful 3,000 square foot gallery with many possibilities.

Martha Shoots Adele, Fintan, a Pigeon Fancier and More at Eugene 20X21 - Edition 2019
Photographer Martha Cooper again rules the roost at BSA with her new photos of the 20x21 EUG Festival in Eugene, Oregon. Organized and funded by the City of Eugene’s Cultural Services Public Art Prog...
M-City is Airborne with Szczecin Wars in Poland
“Szczecin before the Second World War was a German city,” says the street artist named M-City. Now it's flying as a spaceship in his latest stencil mural here – in Poland. M-City. "Szczecin Wars"....
NUART 2014 x BSA Update 3
On this third day at NUART we'd like to bring you a bit of the good humored craze that's happening right now as some of the artists are finding their spots. We also wanted to give a sense of the exi...
James Marshall DALEK "The Redistribution of Destruction"
A quick look at new works by James Marshall aka Dalek for his show, “The Redistribution of Destruction”. His bright colors and geometric op art is bent through the lens of Murakami and yet glows occas...
BSA Film Friday 09.11.20
Our weekly focus on the moving image and art in the streets. And other oddities. Now screening : 1. Esteban del Valle - The End is Near2. NADIA VADORI-GAUTHIER: Une minute de danse par jour -...
Blackmath Boston Brooklyn Street Art CFYW Fourth Wall Project Geoff Hargadon Hargo LNY MA NANOOK RADICAL! The Phantom TipToe William Stitt Zatara