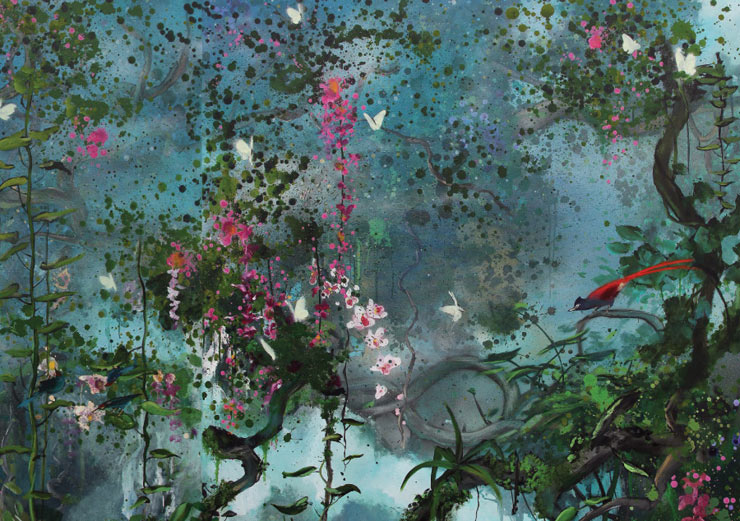 Xenz presents: Cloud Cuckoo Land @ Blackall Studios, December 1-4, 2011
PRIVATE VIEW: Thursday December 1, 18:00-22:00
PUBLIC VIEW: Friday, December 2 to Sunday, December 4, 12:00-18:00
Blackall Studios, 73 Leonard Street, Shoreditch, London, EC2A 4QS.
British artist, Xenz presents a new major solo show, Cloud Cuckoo Land in London this December.
Famed for his graffiti murals, the artist exhibits a beautiful collection of new landscape paintings which immerse the viewer in an undiscovered world filled with exotic species drawn from the vivid depths of his imagination.
Xenz offers a panoramic view of his fantasy world, presenting a strange utopia where peculiar plants, insects and birds are sighted among the tropical lagoons of moonlit forests. But with the satirical slant of an artist who paints from a dark, gritty warehouse in Hackney Wick, viewers can expect interesting twists such as a bird of paradise sporting Burberry feathers.
Cloud Cuckoo Land shows a body of work created over the last two years. In addition to a new collection of paintings and prints, Xenz’s newest work has seen him experiment with scale by painting on large-scale murals that divide into smaller, compact and highly-desirable pieces.
Xenz successfully marries fine art with urban art forms, using the spray can to capture fragments of memory and subject matter often drawn from the natural world. A love of ornithology and a search for ever-exotic wildlife has led to this greater evolution of the artist’s work.
Xenz explains: “Cloud Cuckoo Land is a kind of childhood fantasy of setting sail to discover a lost world, but ending up in an opium den in Singapore. It’s a celebration of creativity; something happy and joyful, but with a slight twist. I suppose living as an artist is seen as living in cloud cuckoo land by many people and I want to celebrate this by showing people what my dreams look like. Scientists estimate that there are more than 7 million undiscovered species on the planet — that’s inspiration right there!”
An extraordinary cohesion between mind, memory and spray can, allows this influential artist to walk up to a wall or canvas and paint epic landscapes and fantasy dreamscapes from his imagination. Offering a sense of escapism, a Xenz painting has universal appeal, and in the last two years alone, his work has been commissioned for a show by the British Council in India, exhibited globally from Australia to Ibiza, and his work hangs in mud huts in Gambia to celebrity homes in Chelsea.
Xenz paints landscapes imbued with escapism and symbolism and his background in graffiti is still evident. Look closely at a Xenz composition and you might find the letters of his tag worked into the twisted vines or the rocks in a waterfall. “It’s like a game, trying to decipher the code,” he says. “All my work is about escapism: the exotic and that vein. It’s about freedom and I suppose I’m trying to preserve a sense of value in art. I like to create work that takes you somewhere; a picture that takes a few moments more to soak up than an instant slogan or striking image.”

"Unsmashed" A Street Art Sticker "Field Guide"
The street sticker, be it ever so humble and diminutive, is profligate and sometimes even inspiring. An amalgamated scene that is anonymous, yet curiously stuck together, the organizers and sponsors ...
"Daze World", the Artist and Book from City to Canvas and Back
"This is not an autobiography in the practical sense. I didn't cover the day-to-day minutia of my childhood or formative teenage years all the way to the present. Rather, I have chosen to take the rea...
BSA Film Friday: 07.15.16
Our weekly focus on the moving image and art in the streets. And other oddities. Now screening : 1. In Memory: Giulio Vesprini 2. "The Yarn" Trailer. 3. Michael De Feo: Crosstown Traff...
BSA Images Of The Week: 08.25.19
The Amazon Forest - which furnishes 6% of our oxygen is being burned - an unthinkable event in human history. Evidence points to arson - incidences are up 80% over last year. Darkness now falls h...
"David Bowie is" Coming To Brooklyn in March
For those who felt that they lost a friend when David Bowie died two years ago, a new exhibition organized by The Brooklyn Museum will bring him back to you for a moment. For those who refuse to speak...
Blackall Studios Brooklyn Street Art London Shoreditch U.K. Xenz