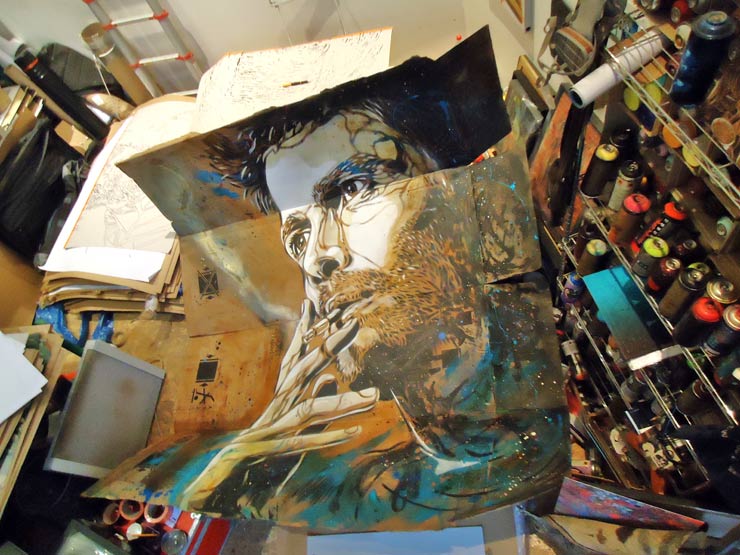 Shooting Gallery is pleased to present Smoke Gets in Your Eyes: Recent Works by C215 the new collection of work by Parisian street artist C215. This will be C215’s first solo show with White Walls, with the opening reception on Saturday, December 10th, from 7-11 pm, and the exhibition is free and open to the public for viewing through January 7th.
Christian Guémy, also known as C215, is a Parisian street artist known for his intensely emotive stencil portraits. C215 began painting six years ago, and has since brought his work all over the world, from New Dehli to Istanbul. His expansive career in public art
has made him renowned in more than just the usual circles of stencil-based art fans and collectors. With two masters in history and art, C215 is well-versed in how art impacts society. By integrating layers of found objects in the backgrounds, and focusing on portraits of everyday people, C215 captures snapshots of the streets he walks and the lives that inhabit them. Simple detailing lends an honest aesthetic to the always changing facial expressions in C215’s portraits, almost all of which present us with the feeling of looking beyond mere visage into each person’s true character. The concept of revealing the things most often kept unseen is one that reoccurs throughout the works, often drawing attention to the harsh sides of poverty. This study of hidden elements also shapes the body of work presented in “Smoke Gets in Your Eyes,” investigating the motives of Cigarette ads and the iconology of smoking.

With a minimum of pieces to be included in the show, most of the artists stencils focus on old ads, images of friends smoking, the hands of smokers, and a few portraits of smoking artists (Painters George Braque and David Hockney, street artist Indigo, and photographers Jeremy Gibbs and Jon Cartwright). The works will be on recycled objects including cardboard, vintage advertising papers, and antique burned canvases. Through a look at the humor and irony in tobacco ad campaigns of the past, C215 asks us to question how modern advertising sells the idea and image of smoking to us now. The works highlight the perversion of smokers’ imagery, the manipulations of marketing and how thoroughly advertising can shape the public mind.
From the Artist:

“By smoking, teenagers think they will look classy, as one 70’s advertising ironically said: “Smokers are somebody special”.

I personally think nobody should begin. I, myself, had been a cigarette smoker for 20 years; I finally got rid of it in 2009 so I am now really happy to explore the social and psychological impact of smoking. This show will mainly deal with old cigarettes ads in order to show how crazy tobacco advertisings could have been in the past. Cigarette lobbyists have always tried to persuade ordinary people that, by smoking, they can get the style and attitude of dominant social groups: intellectual white men. The tricks used to persuade the smoker of the benefit of smoking show how cigarette brands use the psychological weakness of smokers to sell them an illusory dream. The ordinary targets of these ads are minorities and dominated social groups: woman looking for self-confidence, lonely mums and housewives looking for a relaxing moment, immigrants trying to look like western people, workers getting bored of a harassing daily life etc. And most of these ads try to persuade people that smoking their brand is not so dangerous…the show looks at how
we can sell death to people and make them feel safe and happy with it at the same time. This show could be another modest attempt to show what everybody should know- that any kind of advertising is always lying.”

Christian Guémy, also known as C215 is a street artist known for his revered stencil graffiti. Born in Paris in 1973, C215 has spread his art around the globe with a public art career that began in 2005 and quickly established him as a man meant to be a legend.

The Shooting Gallery opened its doors in 2003 to the historic Tenderloin district of San Francisco; known for its lively street culture. Growing up in Southern California gave owner and curator, Justin Giarla, a love for everything lowbrow: pop art, street art, outsider art, punk rock album art, comic book art, surf/skate art and hot rod culture. Giarla recognizes how important it is to provide lowbrow artists with a platform for their work, which is exactly what Shooting Gallery has done for nearly a decade.

"Pintemos Mexico" with Specter, OverUnder, Shente and Libre in Ensanada
Irish Catholics like Specter always get romantic when they see the Virgin Mary being worked into a mural. The Brooklyn based Street Artist just got back from the heavily catholic country of Mexico (En...
Axel Void: Ode To the Spirit of Andalucia
The unbridled joy and adventure of youth! Axel Void has captured both in this new street diptych in a Student dormitory in Seville, Spain, called Livensa Living Sevilla. Axel Void. In collaborati...
1st Mural By the Blind & Sighted in Brooklyn: Rubin415 & John Bramblitt for "World Sight Day"
Brooklyn’s always breaking records – and today it can boast having the first mural collaboration between a Street Artist and a blind artist. Rubin415 and John Bramblitt have just combined their two un...
Abandoned Graffiti-Covered New Jersey : NSFW
With New York’s hallowed graffiti hotspot 5 Pointz buffed and freshly hit up with GILF! and BAMN's yellow gentrification tape installation, we've been thinking about the disappearing quantity of ratty...
SpY: "Earth / Tierra" at Plaza de Colón in Madrid
SpY describes his new public art project “Earth,” as “a luminous red sphere caged inside a structure.” You may wonder what this structure made from building-site scaffolding represents, especially wh...
Brooklyn Street Art C215 CA San Francisco Shooting Gallery