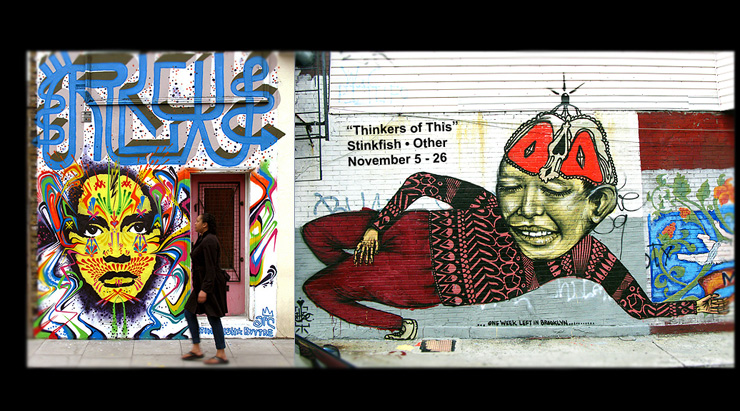 Brooklynite Gallery is proud to present, “Thinkers of This”, an exhibition from two well-traveled, street artists, STINKFISH and OTHER.

With work created on reclaimed surfaces such as vintage record covers, magazines and metal shelving, STINKFISH’s work cleverly mixes beauty and grit. Using a color palate that captures the flavor of the South American streets, this artist’s imagery does often originate from his own camera lens, but with all the time spent hitting the pavement, it’s no surprise discarded snap-shots are used at times to tell a story.

Striking women, proud men or gaze-filled children are often the subjects before STINKFISH adds his signature touch —an intricate tribal pattern to their features. Whether it be using stencil techniques or hand-drawing these patterns, Colombia’s premiere street artist’s images evoke a sense of cultural pride all while mixing in his post-youthful discontent and love of punk music.

Canadian artist OTHER has been kicking around this scene long before the term ‘street artist’ was one. Beginning with his freight train paintings that often consist of chalk white, weathered-faced vagabonds, floating on top of colorfully patterned, twisting-limb figures, OTHER has always made it a point to immerse himself in the very same culture he depicts.

Symbolic shapes, utensils, and typography in and around figures are the “sign language” he uses to communicate thoughts, ideas and dreams aloud. Curiosity often takes OTHER down the most windy roads, in the most remote places to seek out locations to work outdoors. These journeys often later feed into the back story of his paintings. Sometimes old signage, numbers, text bits and tags from other artists who’ve left their mark can become unplanned collaborations of sorts. Traveling and painting in places like northern Serbia, Chile and Romania with stories that seems to rival those of Hunter S. Thompson, no city or town is too far off the beaten path for this nomad artist.

"Post-Posters" Puncture Public Discourse in Strasbourg, France
Post-Posters in the city of Strasbourg, France From March through May 2019 “Actions Speak Louder Than Ass Ads,” says a new stencil-style printed poster by New York’s epic, if sometimes cryptic...
Labrona and DB on the Road, Dispatch From Portugal
“I didn’t get invited to paint anywhere this winter so I made my own street art trip,” says Labrona of his new wheat-pastes in Portugal. “It’s sort of a throw back to before mural festivals, when we j...
BSA Film Friday: 07.15.16
Our weekly focus on the moving image and art in the streets. And other oddities. Now screening : 1. In Memory: Giulio Vesprini 2. "The Yarn" Trailer. 3. Michael De Feo: Crosstown Traff...
Stickers: One Quick Slap And You Are Done!
We remember walking down the street somewhere in Los Angeles with Shepard Fairey and a gaggle of other artists after a panel discussion we led at LA MOCA back in the day…Shepard was enthusiastically ...
Fun Friday 01.20.12
Our top Stories for you on this Fun Friday: “These Boots Are Made for Walking” Nancy Sinatra (VIDEO) Pure Evil Goes Pop! Saturday at Corey Helford (LA) Ludo in Rome Saturday Ryan Seslow an...
Brooklyn Brooklyn Street Art Brooklynite Gallery NYC Other Stinkfish