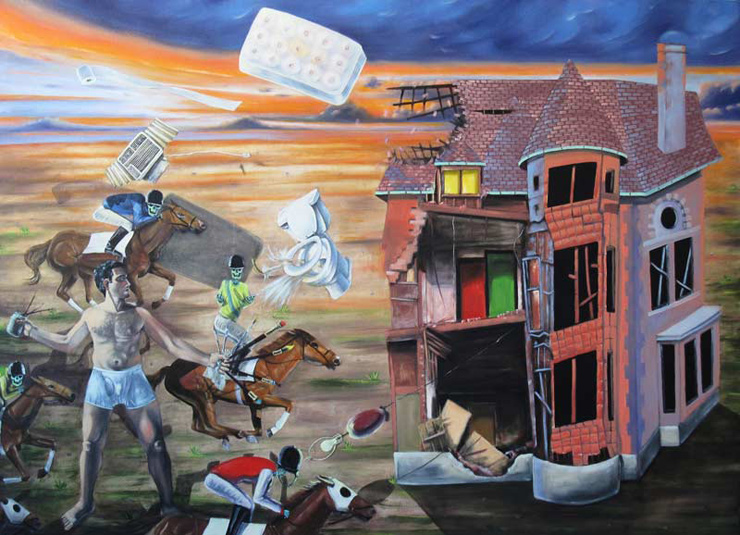 Bushwick resident & known hyper surreal oil painter Ryan Ford will have his first solo showing in New York City at Factory Fresh. New lavish painted environments from other dimensions will greet the viewers and unfold throughout the space. An artist known for comic symbolic abstraction, Ford delves a bit deeper into his psyche while titillating the mind with streaks of quiet violence and provocative tranquility.

Currently residing in NYC since 2006, Ryan after graduating from The Savannah College of Art and Design had no interest in city life. He instead chose to move to the quiet mountain town of Asheville, North Carolina, home of The Black Mountain college. There he spent the next four years living in an old feed factory with a crew of like minded artists where they collectively curated art shows and performances. Then in 2006 he opened the door to two photographers from the New York Times asking him if they could shoot photos of him in his studio where upon he said, “hell yes,” and ended up in a two page spread in the New York Times Style Magazine. At this years 2011 TED X Conference Ryan Ford’s recent commission was presented.

Ryan’s original inspirations derive from 15th-17th century Sienese paintings to Philip Guston, Francis Bacon, to pop culture video games. At first glance many describe Ryan Ford’s most recent paintings and sculptures as colorful and playful, however with closer inspection will reveal ideas based on the collective fear of a collapsing economy, the continual insensitivity and abuse to the delicate nature of our ecosystem, further proving we are the only species on this planet that take more than what they need. These serious topics and themes never without a mix of humor, pure absurdity and ridiculousness.

Don’t Try To Play Me Like An Indoor Sport, on view October 21-November 20th

Factory Fresh is located at 1053 Flushing Avenue between Morgan and Knickerbocker,
off the L train Morgan Stop

See the Gallery Show! The BSA-UN PM/7 Pop-Up Exhibition
Behind the Scenes for the Brooklyn-Berlin Pop-Up Last Saturday the 14th the public was invited to an open reception to meet the artists who had flown to Berlin to create new portraits for Urban Natio...
Dont Fret: "Life Thus Far" to Be Released
Nothing to lose your head about, but you’ll be thrilled to hear about the long-anticipated release of the new monograph by the ingenious troublemaker and largely incognito Chicago Street Artist DONT ...
BSA Images Of The Week: 03.17.19
Patti Smith begins the roll call for BSA Images of the Week in this portrait by Huetek. The punk term is loosely tossed around today, but it only applies to a certain number of people truthfully....
BSA Film Friday: 08.06.21
Our weekly focus on the moving image and art in the streets. And other oddities. Now screening:1. FEM - Graffiti Documentary2. GRAFFITI TV: HUNGR3. SOFLES / MARVEL BSA Special Feature: ...
Stickers Vol. 2: More Stuck-Up Crap from DB Burkeman
In the Street Art continuum that presents itself to the passerby on city streets, the early practice of hand-drawn tags on stolen postal stickers eventually morphed into mass-produced slick runs of p...
Brooklyn Brooklyn Street Art Factory Fresh Gallery NY Ryan Ford