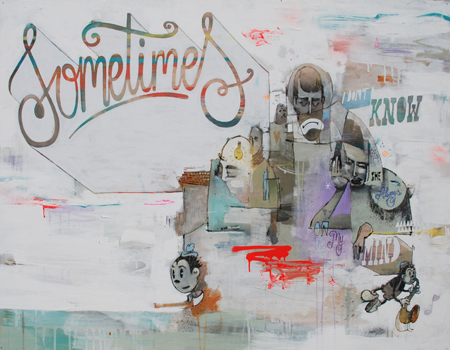 StolenSpace is proud to present Word To Mother’s fifth solo show with us, entitled ‘Essence Of Adolescence’ featuring a new body of mixed media paintings on wooden panels.

‘Essence of Adolescence’ is an enlightening glimpse into the artist’s visually obsessed mind. Word To Mother invites the viewer to take a glimpse of his inner mindscape. An outward manifestation that combines references drawn from his childhood and the visual stimulation that he absorbed; cartoons juxtaposed with more serious emotive thoughts and fears that face him as an adult living and painting in East London.

Incorporating hand drawn personal sentiments,emotions and feelings that he executes in the form ofloose script, inspired from his experience as a tattoo artist and tight sign written letters, drawn from years of painting graffiti. A beautiful juxtaposition, of fragile and emotive elements shown through subtle textures and washes of colour, but with a strength and confidence fused with his signature patterns, architecture & figures, this body of work is melancholic yet fun and playful. With anearthy ‘London’ palette of grey tones excentuating splashes of brighter ‘seaside’ colours of fluro red, pink, yellows and turquoise which give the paintings an
optimistic feel. Word To Mother draws inspiration from an adolscence which holds precious memories, juxtaposed with an adulthood which has made him the talented artist he is today. 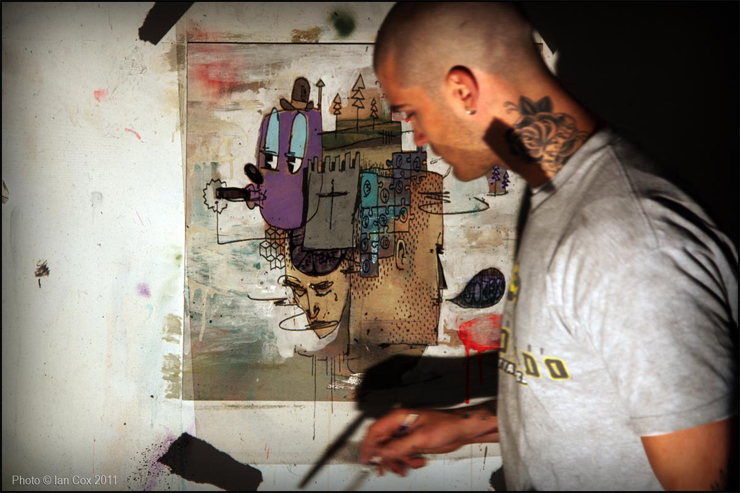 Word to Mother at work prepping for this show. (photo courtesy of the gallery © Ian Cox)

Word to Mother was born and raised in a small English seaside town, never far from a stoney beach, crashing waves and salty sea veterans. It’s this environment thats has had such impact and influence on Word to Mother’s work and can be seen
throughout his drawings and paintings, whether that be the salvaged wood that he often uses as his canvas or the ‘Sailor Jerry’ tattoo references that appear subtly within his work, his paintings help to remind him of his roots whilst now dwelling in a town called London that he makes home.

If he is not drawing, and there is rarely a moment in the day that his sketch book isn’t being filled with twisted sketches or letter outlines that nod to his past, then he is on the lookout for discarded objects, vintage printed matter, or reading and broadening his knowledge so he can find the correct metaphors and words to describe his visual language. His loosness of line, fluidity of style and energy present in each and every painting make his work and approach truly unique and have fast gained him a firm and loyal following.

With shows scheduled for London, San Francisco and LA his artwork ensures that no matter where in the world he travels he’s never far from his home-town port.

#7 Ema: 12 Wishes for 2012
For twelve days we're presenting twelve wishes for 2012 as told by an alternating roster of artists and BSA readers, in no particular order. Together, they are a tiny snapshot of the people wh...
Lakwena: "Lifting Us Higher" and #kindcomments At The Houston/Bowery Wall
Despite the impression you may have from exploding, car-chasing action movies, New York can actually be a very kind place. Yes, New Yorkers can be abrupt, opinionated, and unvarnished in their assessm...
BSA Images Of The Week: 02.09.20
The pronounced disparities and hypocrisies of society are now on display and on parade in our politics, on our multiple screens, in our bank accounts, our hospitals, our music, our schools, our n...
Top 15 Videos on BSA Film Friday From 2015
Every Friday you can stop by here to see a handful of videos that are directly/tangentially related to Street Art. The criterion for selection is admittedly loose so we'll just say that BSA Film Fri...
Ben Eine A to Z (and then some) in Philadelphia
We are texting every day and everywhere these days. Ben Eine appears to be doing it across the entirety of South Philadelphia. Ben Eine. Mural Arts Program. Philadelphia. July 2015. (photo © St...
Brooklyn Street Art London Stolen Space Gallery U.K. WORD TO MOTHER